If you don’t live under a rock, you know by now that Google has unveiled company’s new range of Nexus devices along with a new version of their operating system, Android 5.0 Lollipop. Rumors finally stopped and more importantly we got new “toys” to play with. Along with the new version of Android, Google introduced tons of new features, improvements and completely revamped the UI. Android 5.0 Lollipop is based on what Google calls “Material Design” which is a skeuomorphic approach to this UI. What this means? Well, it means you’ll see lots of animations on your screen, everything will move and will have its destination, elements won’t be disappearing from your screen just like that. Along with that Google added lots of colors, though they’re not too flashy or anything so they actually look good. There are lots of options added here, if you’d like to read more about, check out the full Android 5.0 Lollipop changelog.

One rather important part of this new operating system is, of course, security. As always, security is an integral part of Google’s operating system and it’s a very important part of anything these days really, especially when it comes to technology. Google has, for the first time, introduced an opt-in “kill switch” feature by introducing Android Lollipop. This feature is called “factory reset protection” and it requires a Google ID and password before your phone can be reset and will only work if a passcode is enabled on your phone. This is a great thing considering the phone becomes somewhat useless if a person who stole it can’t wipe it clean, though this option is still opt-in. Android Device Manager was great if you wanted to wipe your phone remotely if it was stolen or something, this only adds yet another, somewhat different level of security to the whole thing. This feature would be even more enticing if it wasn’t opt-in, hopefully Google will somewhat make this opt-out in one of the future updates. I do believe this would drastically help to scare thieves away from Android in general. Apple introduced its “Activation Lock” in 2013 and it was opt-in at first, but it’s not anymore on iPhone 6 and iPhone 6+ devices. It seems like this feature helped drastically and iPhone thefts plummeted (chart below) while Samsung thefts went up, Samsung has since then introduced its own version of the kill switch. 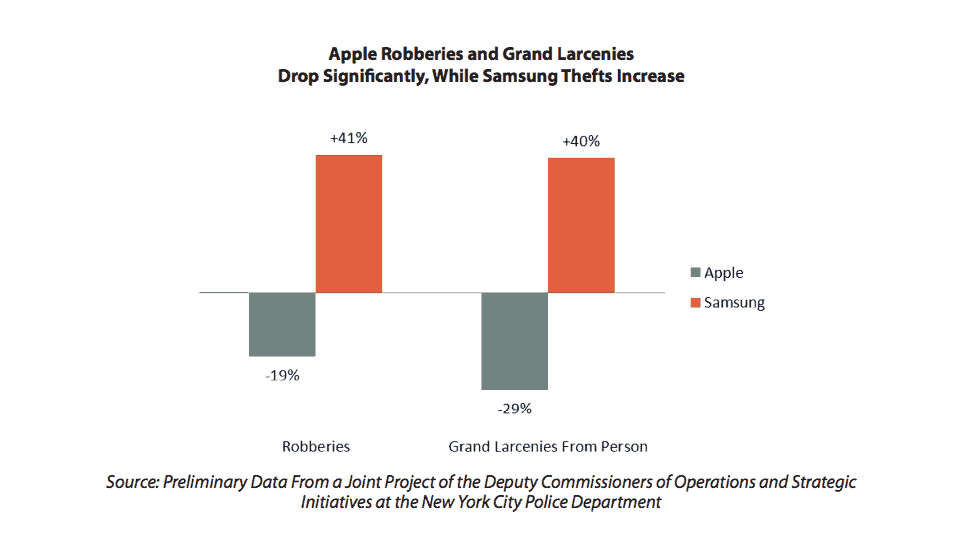