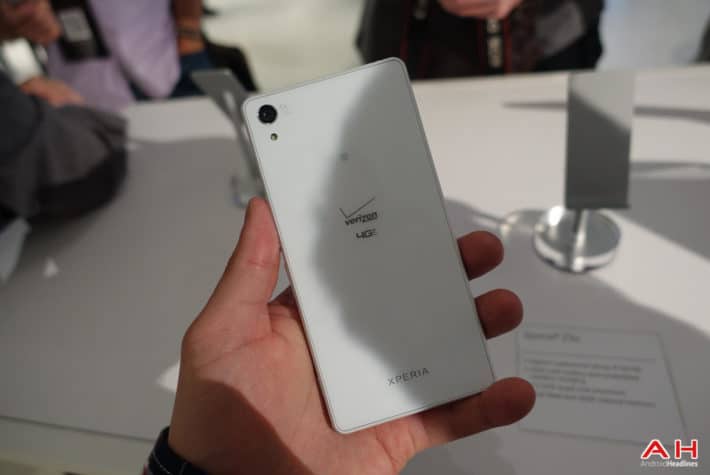 The Sony Xperia Z3v features a 5.2-inch 1080p Triluminous display, Qualcomm Snapdragon 801 processor, 3GB of RAM, 32GB of storage with a microSD card slot, 20.7MP camera on the back and a 2MP front-facing camera, 3200mAh battery with Qi Wireless charging, and also supports Verizon's XLTE network. I've been getting some amazing speeds on Verizon with the Xperia Z3v. Around 85+ megabits per second here in Detroit.

Editor's Note: We've been using the Xperia Z3v for a little over a week now, on Verizon Wireless. It's likely to have pre-release software, and some bugs will likely be ironed out over the next few weeks as they normally are.

Sony has always put out some premium hardware. Aside from the Xperia Z2 Tablet, the Xperia Z1s was the last Sony smartphone I got the pleasure of reviewing, and there are some changes that Sony made since then (which was actually earlier this year), which I am really digging. One is the glass. While it is still a glass back, it doesn't seem to be scratching as easily as the Xperia Z1s was. I would leave the phone on my desk and then pick it up, and it'd get so scratched up. I've been using the Xperia Z3v for about a week, in the same manner as any other phone and no scratches, which I'm very happy about. Also the Xperia Z1s felt a little awkward in the hand to me at least, and the Xperia Z3v feels really nice in the hand. 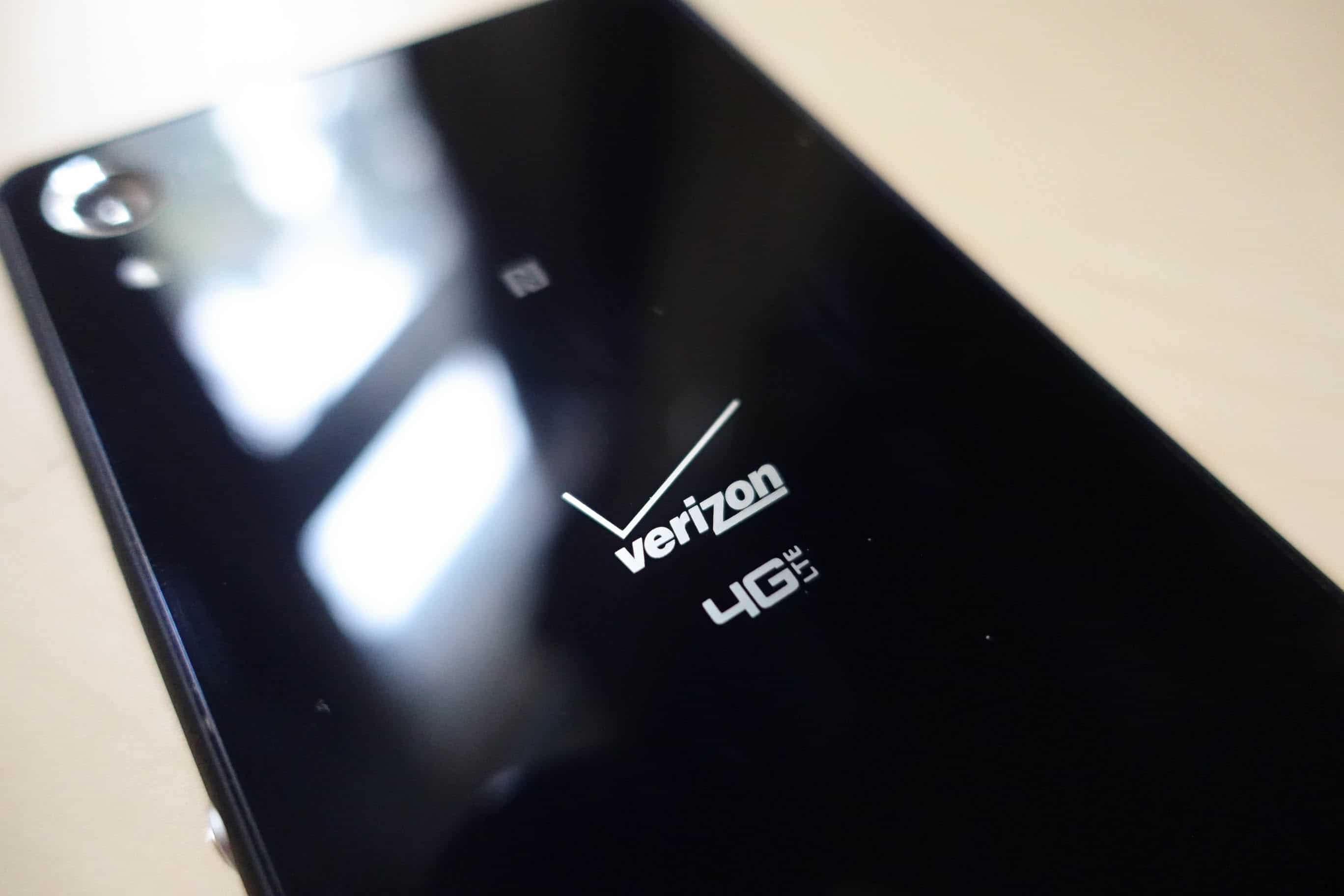 As far as specs go, we're looking at a 5.2-inch 1920×1080 resolution Triluminous display, Qualcomm Snapdragon 801 processor with 3GB of RAM, 32GB of storage along with a microSD card slot, 3200mAh battery with Qi wireless charging, and a 20.7MP camera. I really love the camera, but there will be more on that a bit later on. On the left side of the Xperia Z3v, there's the microUSB charger hidden under a flap of course, as well as the micro SIM card slot. On the right side is the micro SD card slot, power button, volume rocker and dedicated camera shutter button. Up top is your 3.5mm headphone jack. On the back is the 20.7MP camera with Xperia and Verizon logos, as well as the NFC icon, which shows you exactly where the NFC chip is inside of the Xperia Z3v. On the front is your front-facing speakers, 5.2-inch display and front-facing camera. 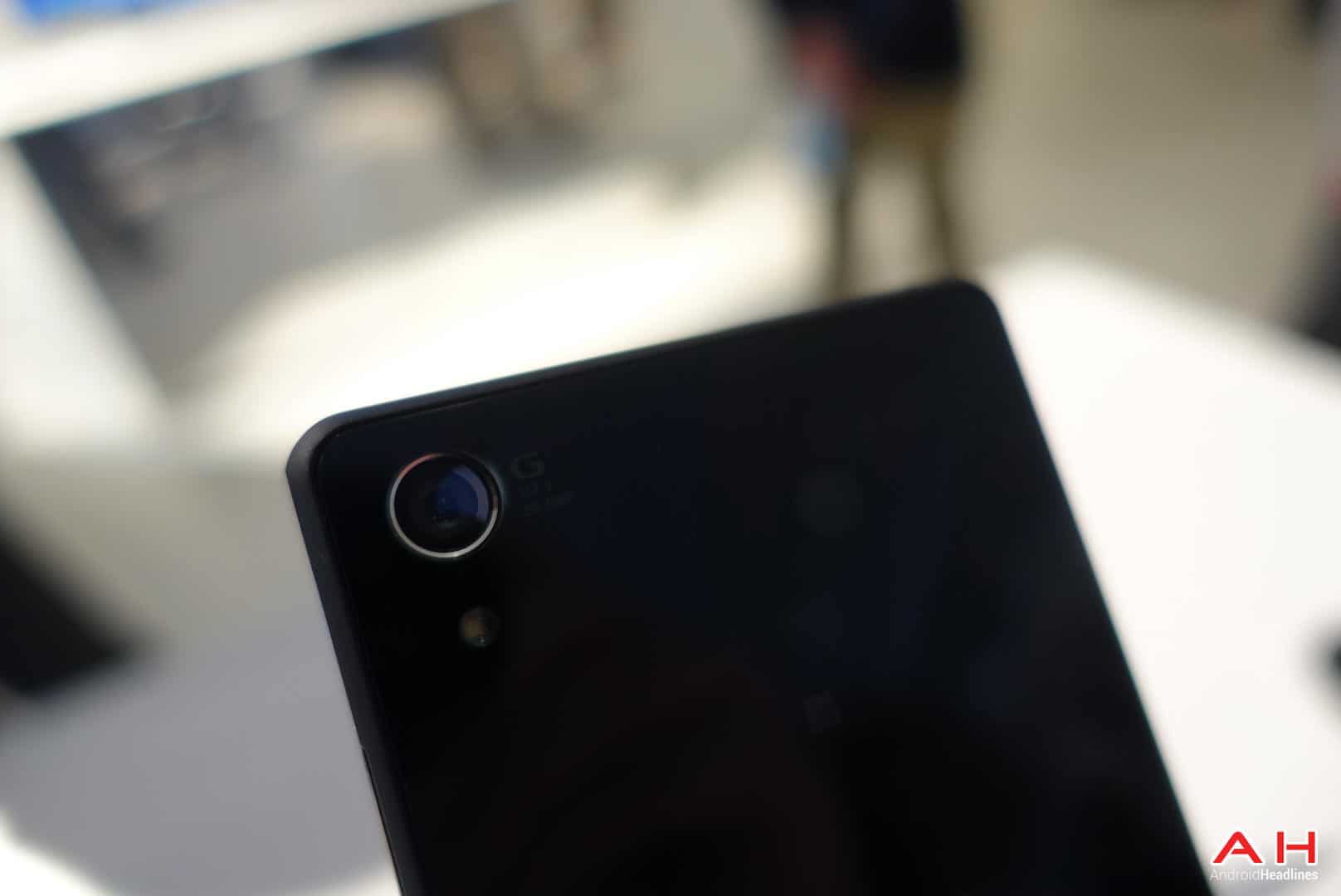 Speaking of the front-facing speakers. They are amazing. Now they are no Boomsound here, but they are still some really good speakers from Sony. I've used it for playing music and watching YouTube videos, and was pleasantly surprised. Especially since you really can't see the speakers on the Xperia Z3v, not like you can on the HTC One M7 and the HTC One M8. I think most people will still be pretty happy though, with these front-facing speakers. They definitely beat any speakers on the back or bottom of a device. 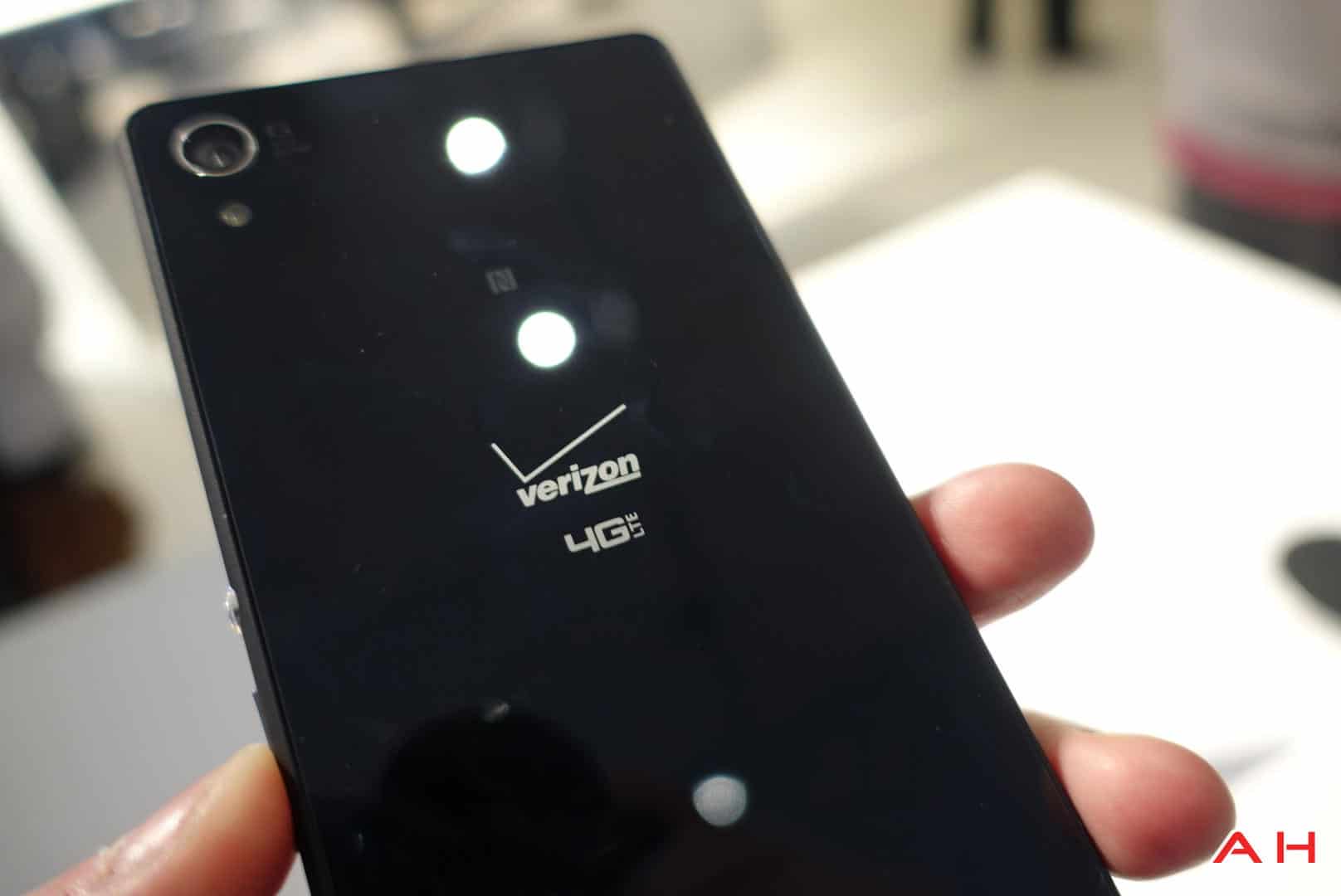 The display on the Xperia Z3v is quite nice. I know with the Xperia Z and Xperia Z1 there were issues with viewing angles, but with the Xperia Z2 Sony went to an IPS panel and haven't looked back. The panel looks stunning on the Xperia Z3v, and pictures just don't do it justice. You'll need to see it in person. Playing games like Asphalt 8 Overdrive and Dead Trigger 2 look amazing on this display, and the Qualcomm Snapdragon 801 processor performs well playing both of those games, as expected.

Yes the Xperia Z3v is waterproof, although that probably isn't a surprise at this point, as every device in the Xperia Z line up has been waterproof. In fact, while at the Sony event in New York City earlier this month, they had the Xperia Z3v, Xperia Z3 Tablet Compact and the new Sony Smartwatch 3 all in a fish tank during the entire event and they were still working. Which is pretty damn cool.

I did test the Xperia Z3v under water, and it did perform pretty well. Just make sure you have Glove Mode enabled or else it'll be tough to use underwater. 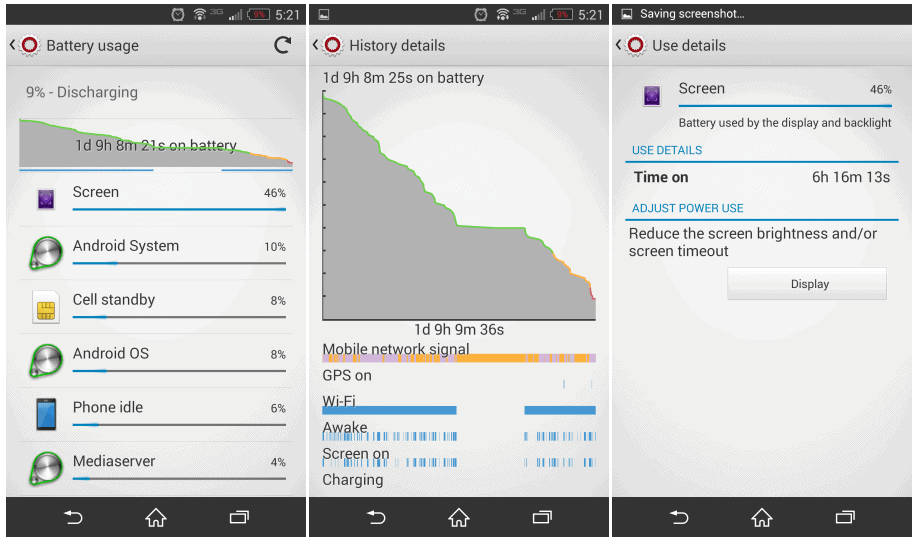 It's amazing. Sony is quoting the Xperia Z3v at 1.5 days of battery, instead of 2 days which the Xperia Z3 and Xperia Z3 Compact are getting. And it definitely lives up to that. As you can see in the image above, I got to 1 day and 8 hours before I put it on the charger, and it still had 23% left. That was with a little over 4 hours on screen time. While Standby isn't quite as good as I'd like it to be, you can check out the System Monitor screenshot below for that, it's still tough to kill this in a day. 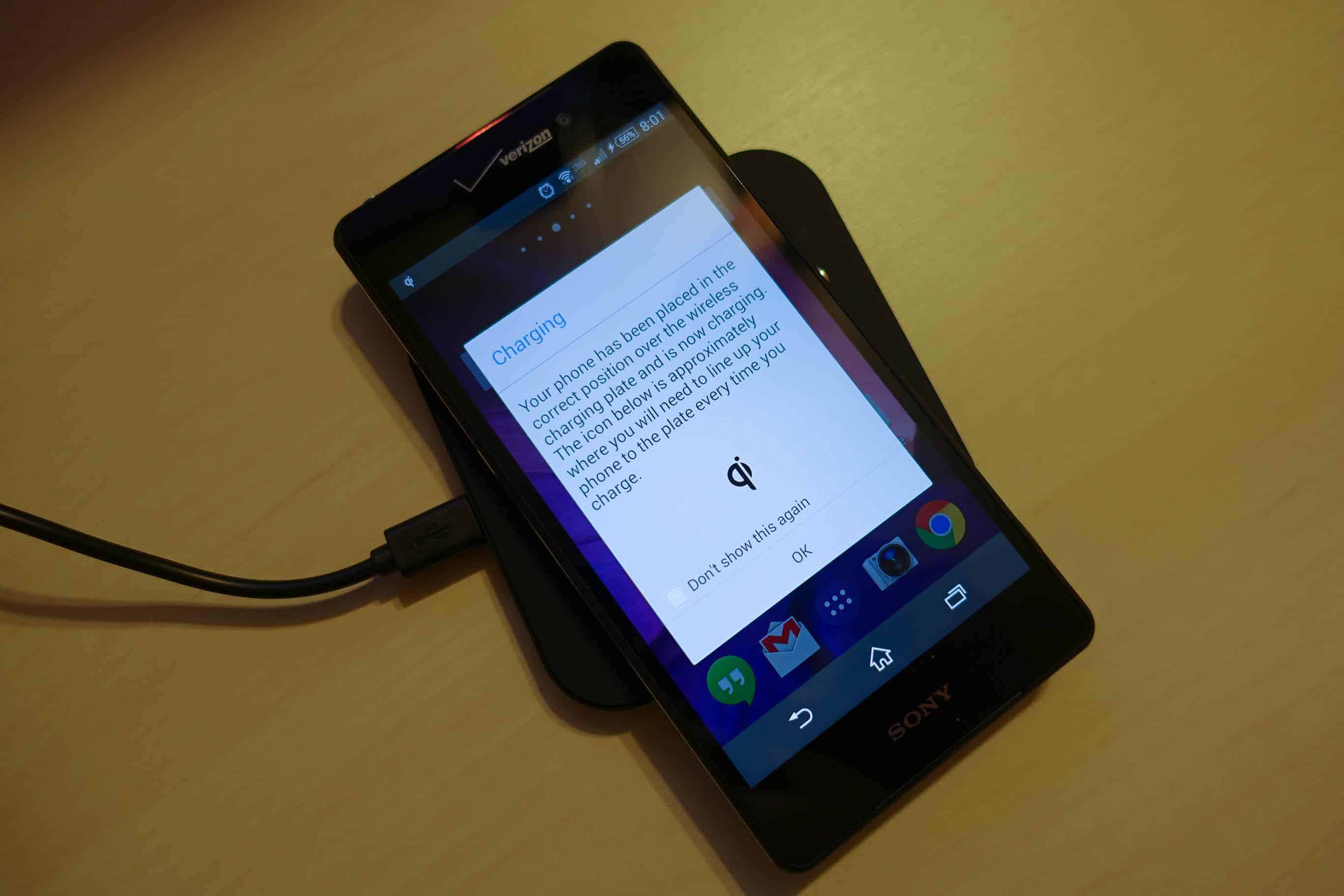 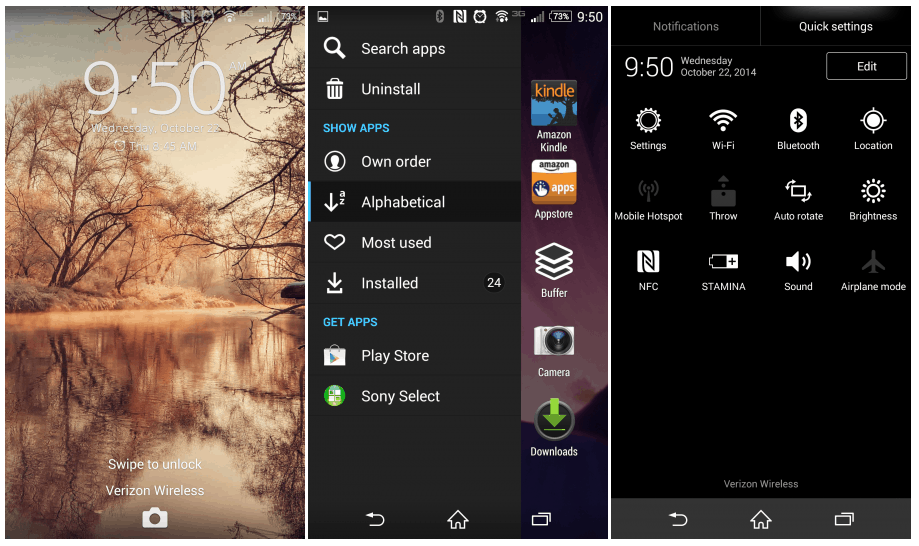 Sony's software has always been one of my favorites. I just love how they add in extra features, but at the same time keep the skin on top of Android pretty minimal. And it's something that Sony prides itself in. While it doesn't look like stock Android much, all the core stock Android stuff is there, including the softkeys. Let's start at the lock screen here.

The lock screen here hasn't changed much. You've got the clock, date and alarm at the top with a camera icon at the bottom to jump into the camera. And you just swipe to unlock it. Pretty simple. The homescreen is pretty much stock with a Sony touch. Even the App Drawer icon is stock Android. Inside the app drawer, you do have just the apps, not widgets. But if you swipe over from the left, you'll see a new panel which allows you to customize the app drawer. Including how it's sorted. Whether its your own custom order, Alphabetical, Most used or Installed.

Personalization. Something I wish more OEMs would do. In the Settings app, there is a section for personalization. Here you've got all kinds of features like motion. This is where you can enable or disable gestures. You can also download or change themes, change your wallpaper on your homescreen and lock screen, clear view notifications, manage notifications, also remove or add system icons in the status bar. So for instance if you have the Battery Widget reborn app installed which shows your battery percentage on the left side, you can take out the battery icon, you can remove just about everything there which is pretty cool and something that no other OEM allows you to do. 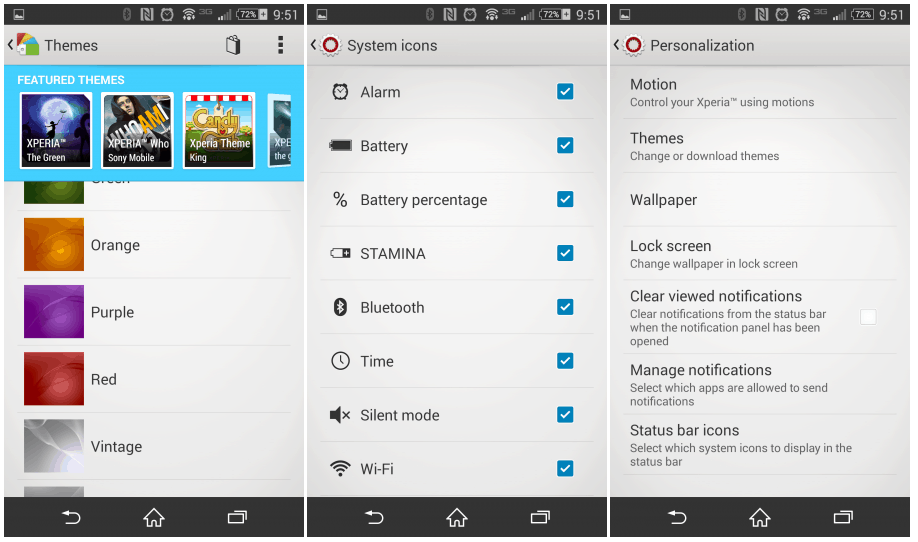 There's also PlayStation Remote Play. Which I don't own a PlayStation so I wasn't able to test it out during the review. But while I was in New York at Sony's event, I was able to check out the PlayStation Remote Play and it was amazing. Pretty seamless and no real lag at all. Which could have to do with the WiFi connection there, but remember there were a few hundred people there using that connection. So it wasn't exactly perfect.

But that isn't all in terms of software. Inside the settings you'll find "Xperia Connectivity". This menu has a ton of things you can do. Including Using Throw. Which is basically their own Chromecast, but it only works with Sony products. There's also Screen Mirroring, so you can mirror your Xperia Z3v screen to a miracast TV or Tablet. But perhaps the best one is the "Cast Screen". This allows you to mirror your screen from the Xperia Z3v to your Google Chromecast device. Inside here is also your Dualshock 3 and 4 features so you can play games on your Xperia Z3v with your PS3 or PS4 controller. 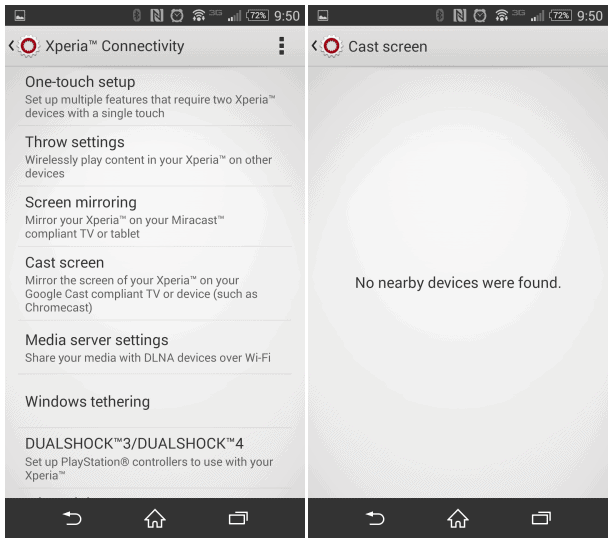 Additionally, under Display, you are able to use Image Enhancement, which lets you use X-Reality for Mobile. I didn't notice much of a difference there, but it was still nice to have that option. You can also toggle on Glove mode, and adjust the white balance of your display. Additionally there is also the ability to turn on Smart backlight control, Daydream and other usual display features. You can also use Double tap to wake up the screen. And as someone that's been using the LG G2 and then the LG G3 as their daily driver for about a year now, that's a big deal. And the best part of that is that it actually works.

I've always liked Sony's cameras. In fact, all the pictures that I take for the site are taken with my Sony RX100M3 digital camera. And I especially like the Sony Xperia Z3v's camera, the 20.7MP camera. Not only does it take great photos, but Sony has also added in a lot of great features into the camera app. Which we've bashed other OEMs for doing in the past. But Sony has kept their camera app pretty minimal and easy to use. Which I think is a big deal.

Some of the apps in the camera include Sound Photo, AR Fun, Multi-Camera, Face In, Timeshift Video, Live on YouTube, Background Defocus, AR Effect, Creative effect, just to name a few. There are plenty more and you can even download more. We're going to take a look at a few of these. AR Fun allows you to put different objects on your picture in realtime. Like bombs, or dropping buckets of ice water, even cut up fruit. Multi-Camera allows you to use both cameras at the same time. So while you're taking the picture, you can also be inside the picture. My favorite app is the Background Defocus. Now it doesn't work as well as it would in a DSLR, but that's kind of expected. However, what this does is it blurs the background around your object. Sony first put this in the Xperia Z1/Z1s last year and I really loved it. Other OEMs then started putting their own version in their cameras as well. Live on YouTube is exactly what it sounds like, it's broadcasting live on YouTube. And with a camera this good, that's really cool.

So enough about the camera features, what about the actual pictures from the camera? As expected, it takes amazing photos. As I stated in the beginning of this review, I've been using the Xperia Z3v for a little over a week and got a ton of great pictures out of it. I got some really nice low-light images. There are a couple in the gallery below that were taken in full darkness, with just a street light or two out there. Which most cameras would have absolutely failed there, but the Xperia Z3v actually made it look good. Even a bit spooky, and with Halloween next week, it sounds about right.

You can check out the photos down below, all taken with the Xperia Z3v, and none were edited at all.

I've said it before, it's great to have Sony here in the US. Even if the Xperia Z3v is exclusive to Verizon, it's still Sony on the biggest carrier in the US, which I think is a big deal. While the Xperia Z3v isn't quite a Xperia Z3, it's still a great device, and with Qi wireless charging inside (I know a surprise right?) it's definitely going to do well. Pair the amazing build quality of Sony, with their camera and the amazing battery life and you've definitely got a winner here. I know people don't like seeing the Verizon logos all over their phones, but those actually on Verizon don't seem to care too much. And I have to say, after using this phone for about a week, I don't really care too much either.