For the past few years, we’ve been salivating at the phones that Sharp announces over in Japan on NTT DoCoMo, Softbank and other carriers over there. They put out some really nice smartphones running Android. But we never see them in the US. Until the Sharp AQUOS Crystal. Now we all have our theories about how Sharp landed on Sprint – most likely due to Sprint’s owner, Softbank pulling some strings – but Sharp is here and boy are we happy about it. A little while ago, Sprint announced the Sharp AQUOS Crystal smartphone. It’s virtually a bezeless smartphone with a nice big chin at the bottom. It does look really nice, but it’s also important to remember, that this is a mid-range smartphone, that is roughly $250 off contract at Sprint. Boost Mobile and Virgin Mobile have it for $149.  So let’s keep that in mind as we go through this review. 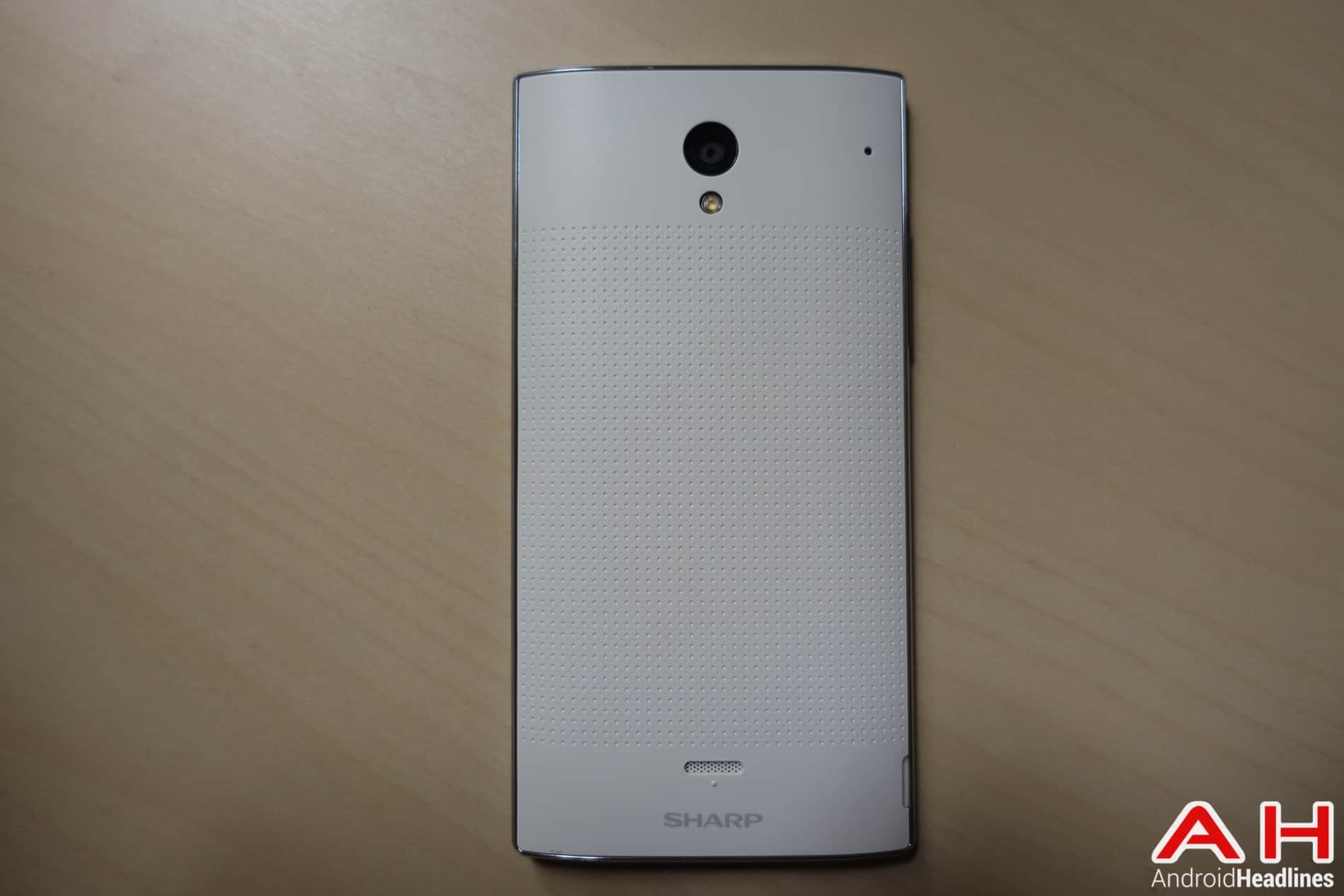 I have to say, for a somewhat “cheap” smartphone, the build on this one is pretty good. Obviously you’ve got the glass front, with the aluminum sides, and a polycarbonate back, which is removable I might add. It is a bit curved, which makes it fit in the hand pretty nicely, additionally, it also feels pretty small, because of the very very small bezels. It makes the bezels on the LG G2 and G3 look huge. To be honest, when I first picked up the Sharp AQUOS Crystal, I thought it was around a 4.3-inch smartphone. That’s just how small it feels. But it’s actually a 5-inch device. Kind of wish I had some 5-inch devices around here to compare it too. But everything is 5.5 and bigger. 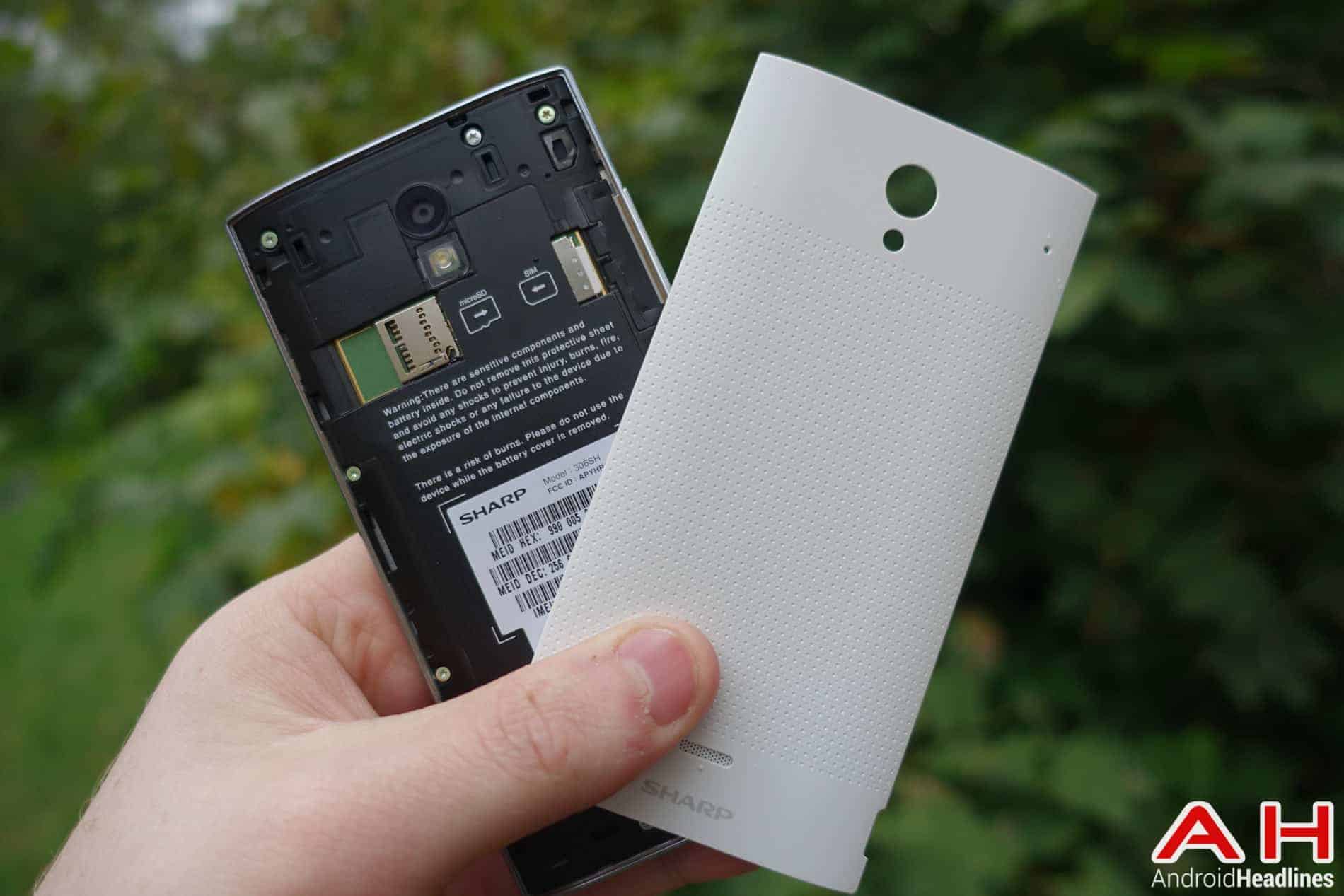 On the AQUOS Crystal, we’ve got the power button up top with the headphone jack, volume rocker on the left side, and the microUSB port on the bottom. Now on the back, there’s your speaker, camera and flash. We’ll talk about the camera a bit later on. On the front is your 5.0-inch 720p display, with the camera, LED notification light and other sensors in the chin at the bottom. 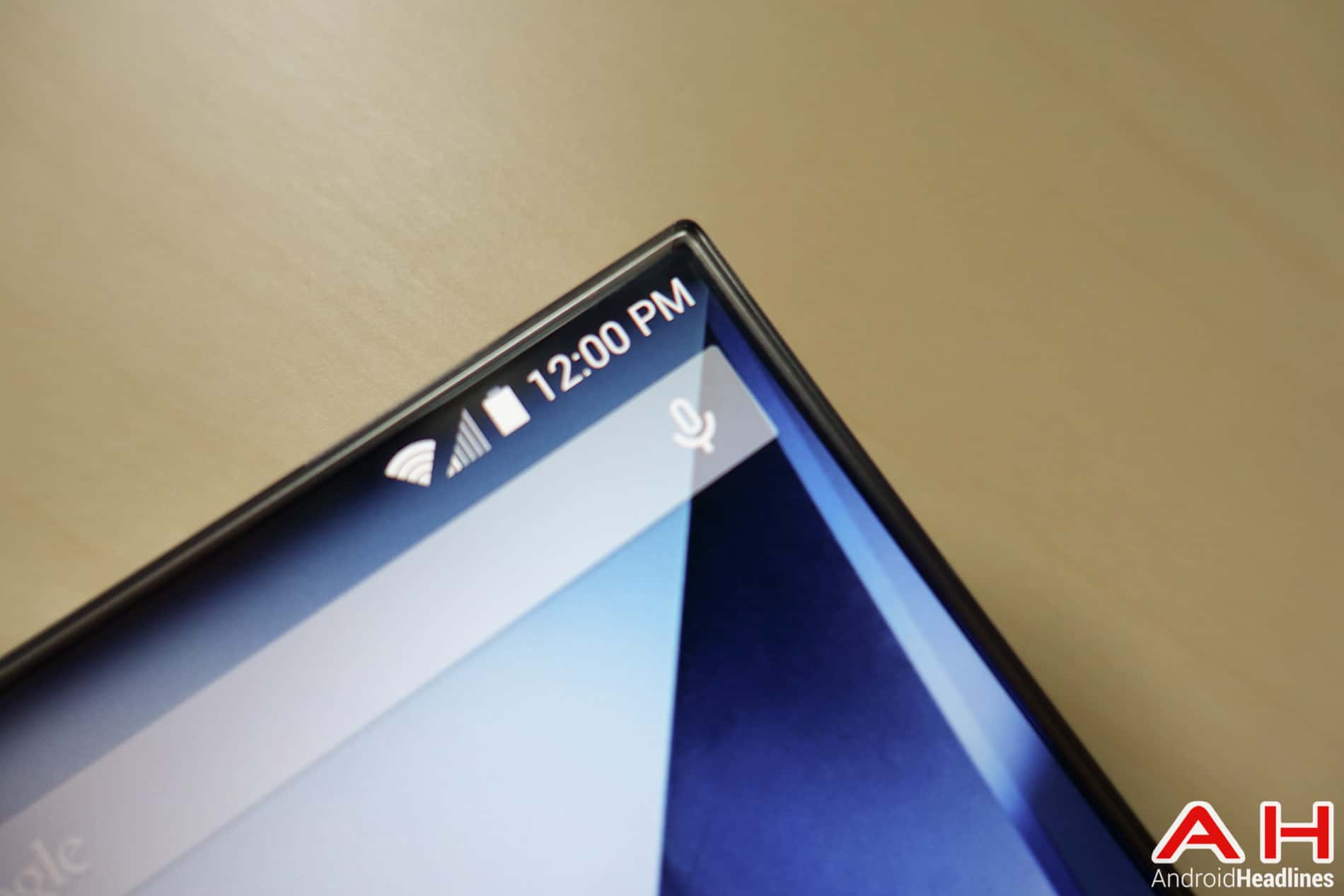 So the display is a 5-inch 720p display. Now, my daily driver is the LG G3, a 5.5-inch 2560×1440 resolution display. So yes, I can see pixels, and especially with a gray background. But for those coming from a 1080p display, you may not be able to see them. That said, the panel is quite good. It’s not mind blowing or anything, but it’s not terrible either. The one thing I know everyone is going to ask is how does it work with such thin bezels. Well I haven’t had any issues with my fingers touching the display while holding it. Now it does take some getting used to with the chin at the bottom. As I kept touching lower on the front of the device trying to hit the home button, but i was actually hitting the “AQUOS” logo down there. 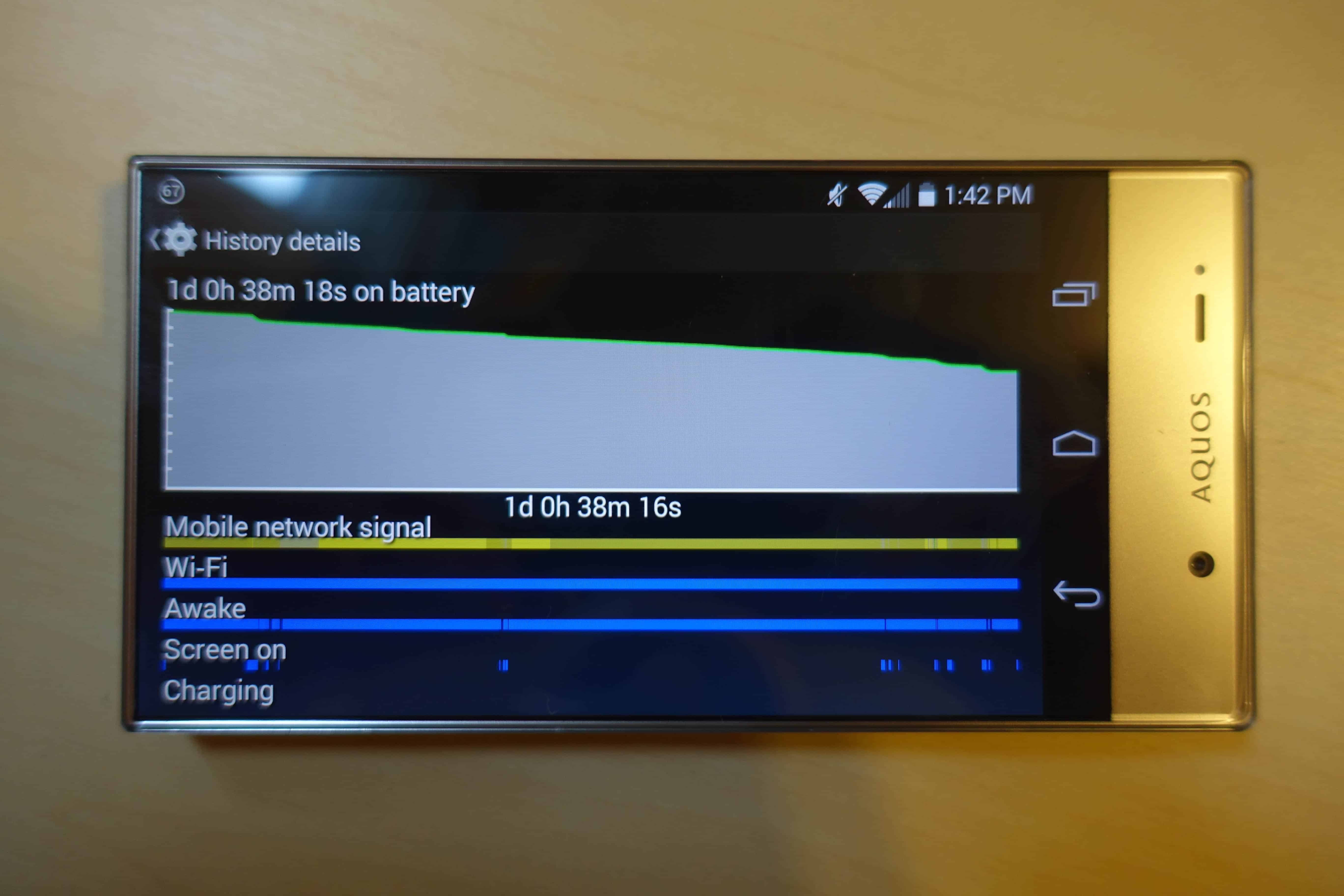 Now we’re looking at a 2040mAh battery here on the Sharp AQUOS Crystal with a 5-inch display. So I wouldn’t expect any insane numbers, and as you can see from the picture above, something is definitely keeping my device awake. But even with that, I could get through most of the day with the Sharp AQUOS Crystal, I should day most of my usual day. 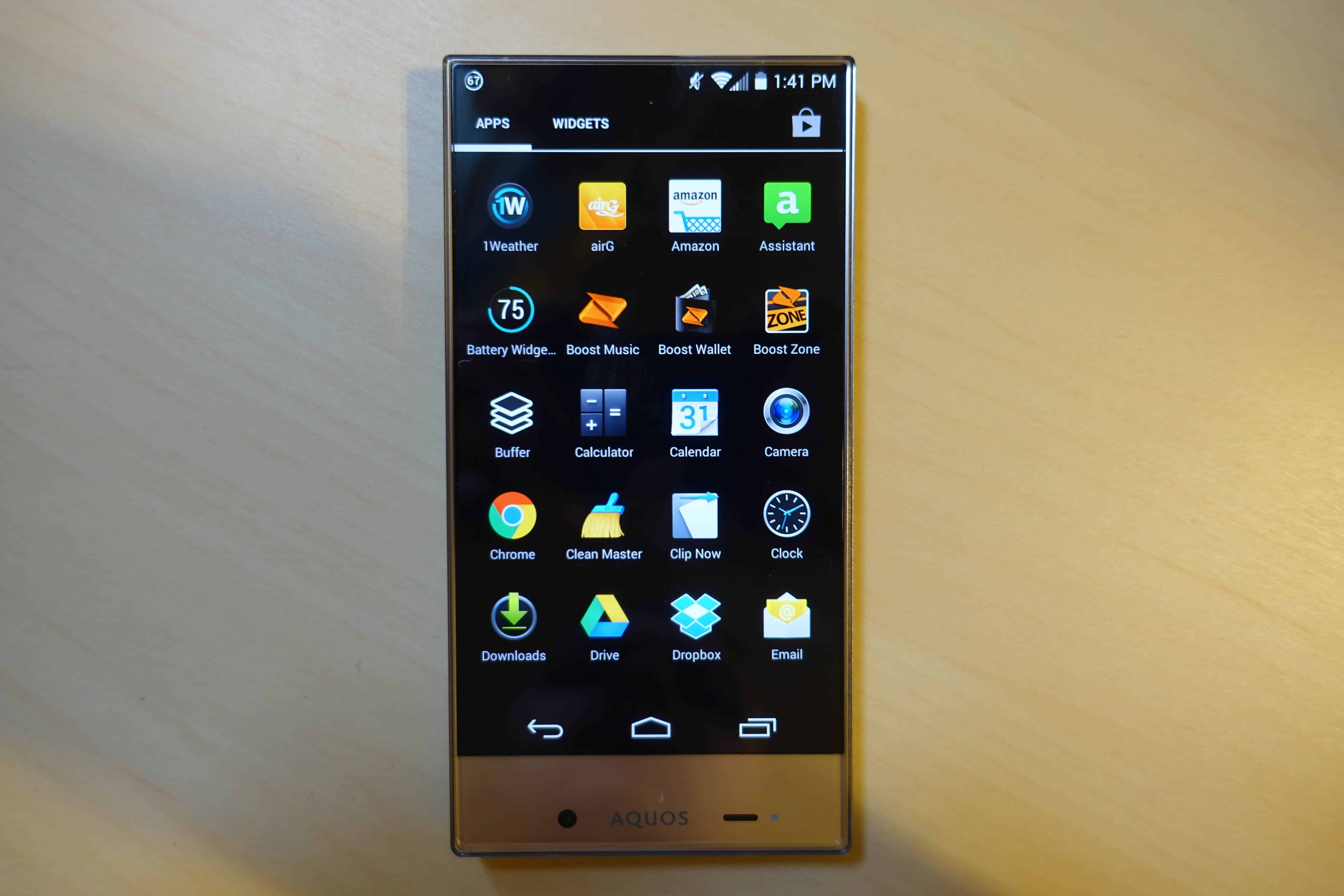 Stock Android FTW! I have to say, I really am liking the number of devices that are taking the Motorola approach lately. And that’s stock Android with a little bit of changes on top. It was like that with the ZTE ZMAX, and with the Sharp AQUOS Crystal there’s even less customizations on top of stock Android.

So when you power on the device, you’ll recognize the lock screen. It’s the same as on the Nexus 5 running KitKat. The home screen is also the same but there is a nice weather/clock widget there that I really like. The app drawer is more like Nova Launcher though. So you’ve got the apps and widgets tab, but they aren’t in the holo blue color. You’ve also got the regular quick settings, and there’s nothing changed there, even the same icons.

Now when you jump into settings, it’s virtually unchanged, at least the looks aren’t. However, they have added a section for Harman/Kardon Audio. Which is basically your equalizer. You may remember Sprint had that exclusive Harman Kardon HTC One M8 earlier this year. So it’ll be interesting if we see this on more Sprint phones in the future. Otherwise the settings are basically the same as AOSP.

Overall, the software is really great. It’s stock Android on a Snapdragon 400 processor with 1.5GB of RAM, and it seems to run pretty well. Of course, I’d love to see Lollipop on here, but that’s kind of hard to do seeing as it wasn’t available when the Sharp AQUOS Crystal launched. 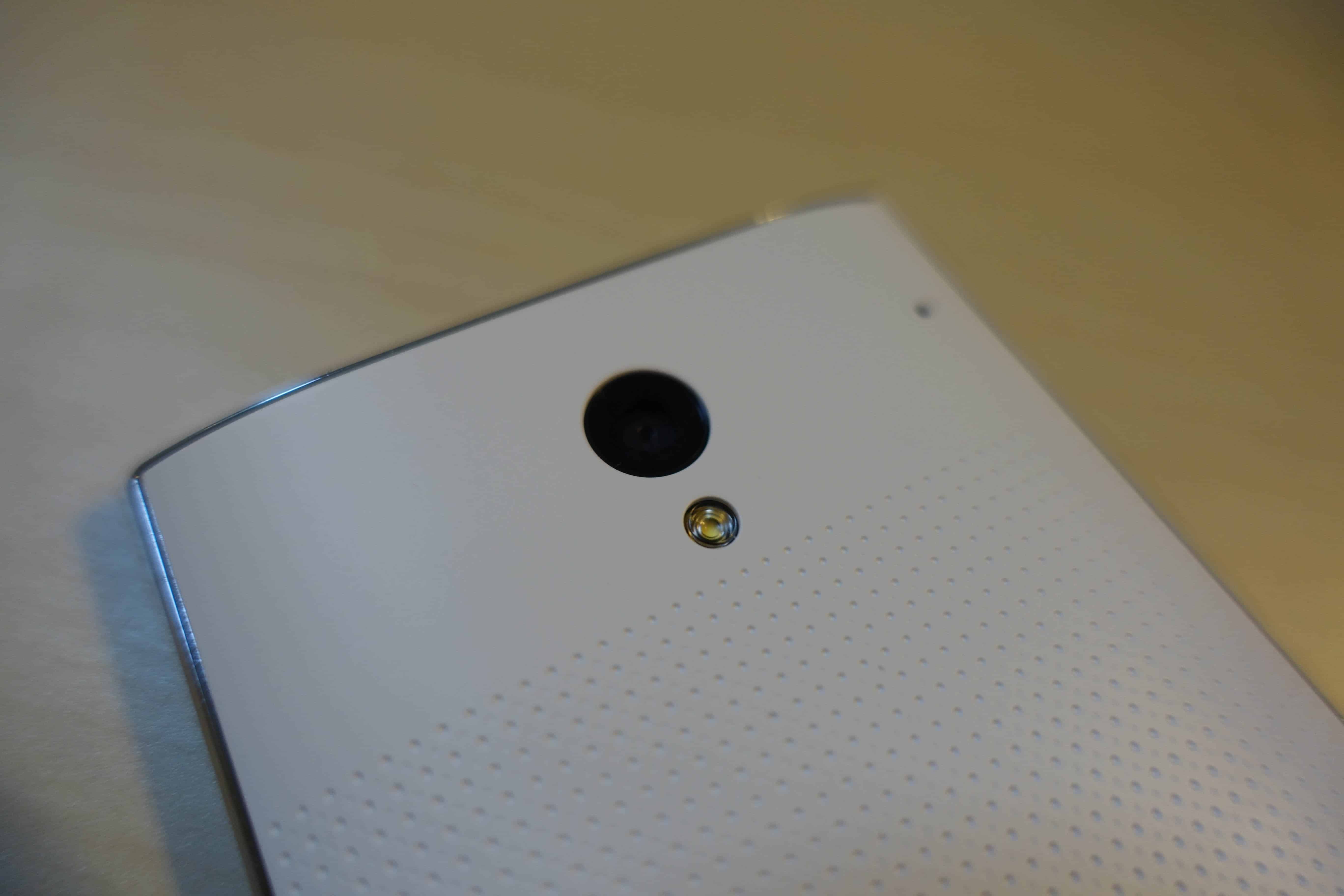 On the camera, we’ve got a pretty straight forward UI here. Nothing crazy like we’ve seen on other phones. It’s also a 8MP shooter, which you can see shots from down below. 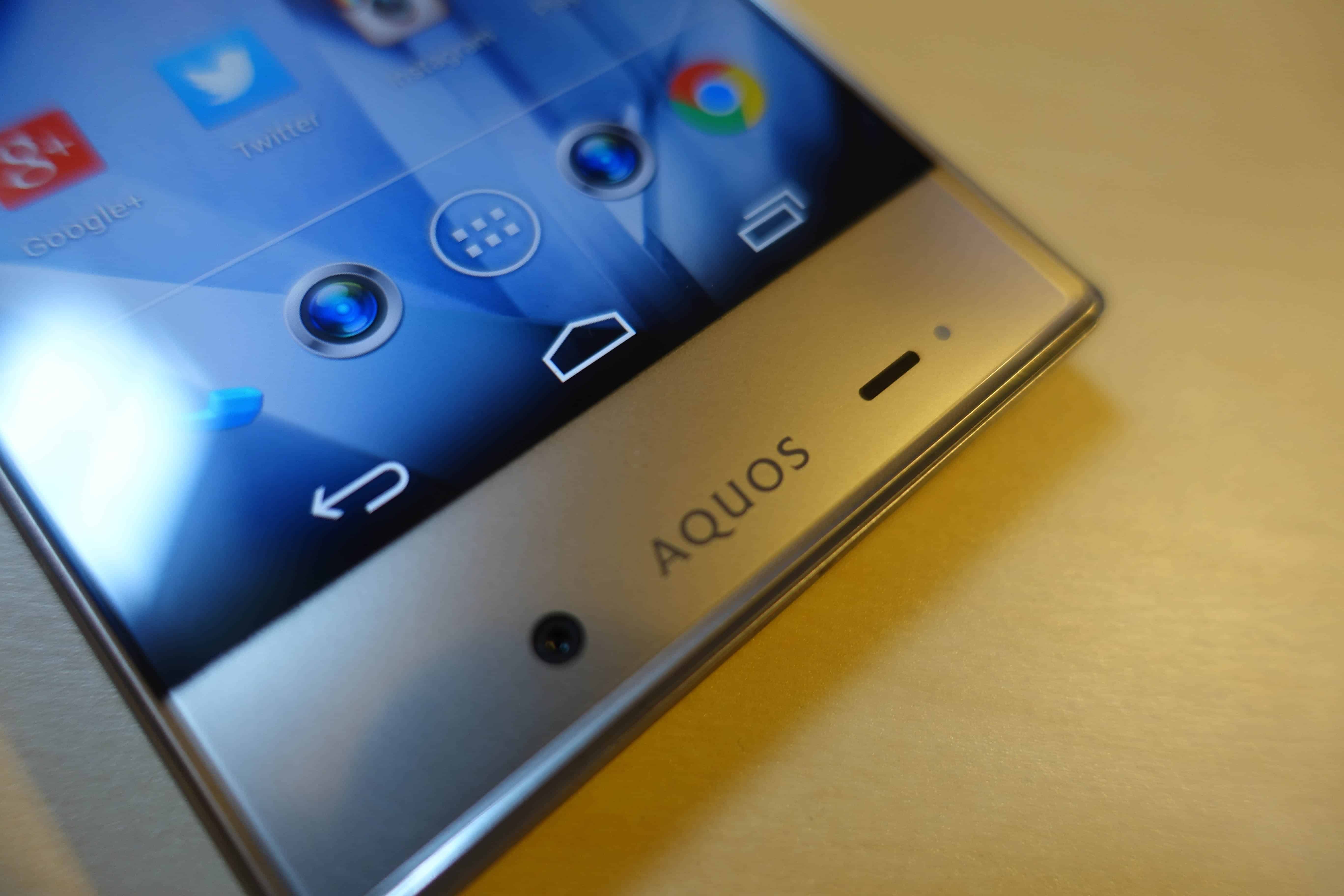 I have to say, I am really impressed with mid-range phones lately. Not just the Moto G, but also the HTC One Mini 2, the ZTE ZMax and the Sharp AQUOS Crystal. It used to be that mid-range phones had a really crappy display with probably bad touch sensitivity. And would usually have an older processor or a MediaTek one that may not get updates. Speaking of updates, since this is a Sharp phone, it’ll be interesting to see how updates are handled. It’s hard to tell as we’ve never really had a Sharp phone here in the US. But back to mid-range stuff, now we’ve got the beast of a processor, the Snapdragon 400, and 2GB of RAM in a lot of these with a 720p display. Not bad at all. The Sharp AQUOS Crystal is not a bad way to spend $250, if you’re on Sprint, and $149 on Boost Mobile or Virgin Mobile.