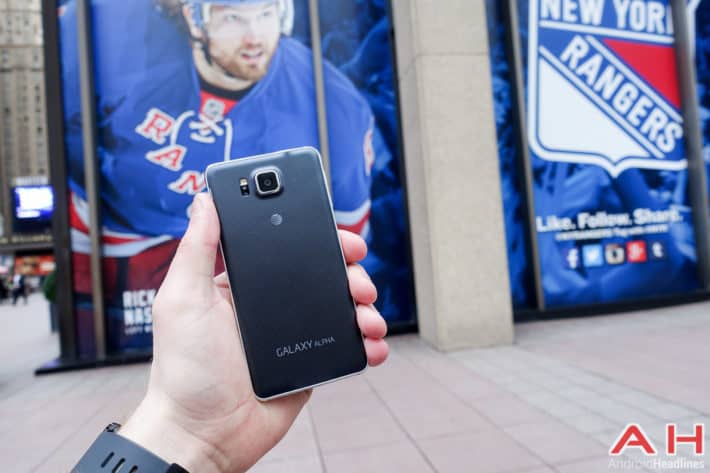 "Eww, glossy plastic." We've said this for years about Samsung devices. Even myself. We've been begging Samsung to do a metal smartphone similar to HTC's One M7 and M8. And they've finally done it with the Galaxy Alpha. Samsung announced the Galaxy Alpha back in August, and we didn't think it'd ever come to the US, but it actually did. It's available here as an AT&T exclusive. It's not completely metal, but it is a start. The frame of the Galaxy Alpha is metal, and so is the Galaxy Note 4. So is it worth all of the hype? Well we're going to break that down in this review and tell you whether or not it's worth it's $199 on contract price tag.

Editor's Note: We've been using the AT&T Samsung Galaxy Alpha for about 2 weeks on AT&T's network. It's running Android 4.4.4 on build G850AUCU1ANH8.

This is a 4.7-inch device, so it is a bit small, especially when compared to the Galaxy S5, or the Galaxy Note 4. But for those looking for a smaller device, it's a welcome device. On the back we've got the flash module on the let side of the camera instead of below it – like the Galaxy S5 had. Then the 12MP camera, no OIS unfortunately. There's also the AT&T logo and the Galaxy Alpha logo there on the back. On the left side we've got the volume rocker and the right side has the power button. Additionally, we've got the 3.5mm headphone jack at the top and micro USB at the bottom.

The Galaxy Alpha's back is removable so you can get to the battery and micro SIM card slot. There is no micro SD card slot this time around, surprisingly. This has been a big reason why so many people stuck with Samsung. For the micro SD card slot, to expand their storage. But holding the device in your hand, it feels really nice. For those that like a phone that fits in their hand perfectly, the Galaxy Alpha is great for that. At first I thought it was a bit small, but I was also coming from the 6-inch Huawei Ascend Mate 7 at that point.

The Galaxy Alpha features a 720p AMOLED display. It may seem subpar, or mid-range. But when it's on a 4.7-inch display, I think it's perfect, as it is a 312 ppi display. It's still a pentile display though. So if you're not a fan of that, you're going to hate this. In every day use, I couldn't really see pixels that much. Of course with some colors on the screen you could see it. But for the most part, you are fine.

It's like a regular AMOLED display on any other Samsung device. Over saturation and all. If you're a fan of AMOLED displays, then you're probably going to love this one.

There's really not much to say here. The software on the Galaxy Alpha is identical to the Galaxy S5. It's the exact same version of Touchwiz and everything. So we've got the same icon-based settings menu here. As well as the same apps. Including AT&T Ready2Go, Caller Name ID, Device Help, Flipboard, Galaxy Apps and plenty of others. There's also the fingerprint scanner. Which seems to work better now than it did on the Galaxy S5, when I reviewed it. But that could be because I reviewed it right after the launch of the Galaxy S5, so there's likely been some bug fixes and stability fixes.

We've got a 12MP camera here with software OIS – not hardware. It's pretty decent, although it could be better. We've got a ton of pictures down below for those interested.