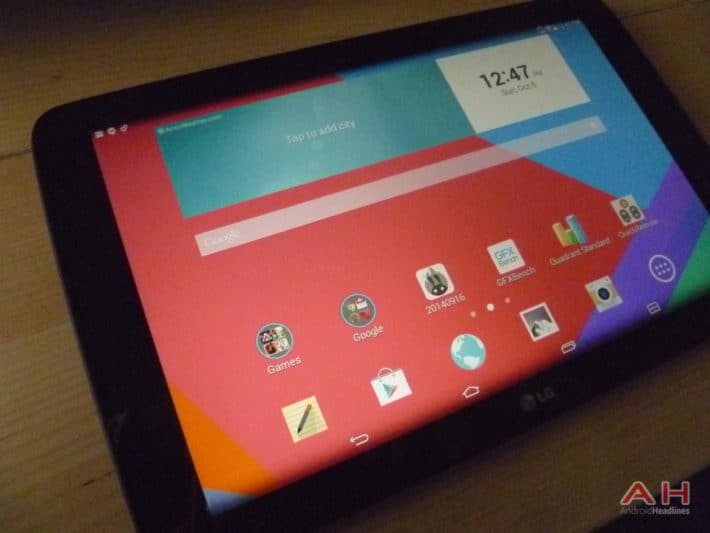 The LG G Pad started out as a mid range 8-inch tablet, and it did fairly well so it should have been no surprise to see that LG would enter the market with newer models the following year. This year they released a line up of three brand new tablets as part of the G Pad line, and we've been using the 10.1-inch G Pad for the past couple weeks. The tablet definitely fits within the mid-range category, but has done well to make me remember what was great about having a tablet with a larger sized screen. While the resolution on the G Pad 10.1 is less than other tablets in the same price range,(the G Pad 10.1 will cost $211.99 through Best Buy's website)the battery inside is an 8000mAh battery which has proven to have some pretty long life throughout our use. Screen on time was about 9 hours for me after I gave it the first full charge, while the entire last week it's been sitting off the charger as I have gotten moderate use out of it throughout each day, basically chipping away at the battery and it's still at 43%. So the battery is great, how does the rest of the tablet hold up? We'll go over all of that.

The LG G Pad 10.1 is nothing to write home about, however that doesn't mean the hardware feels cheap or undeserving of attention. It isn't the tablet you want to be looking at if you're looking for top notch hardware that will outperform most other tablets. It is a great option though for someone looking to get a decent mid-range tablet at a lower cost. The tablet feels pretty solid and performs most tasks well enough. For the size, the G Pad 10.1 was comfortable to hold for even a couple hours at a time playing games, and I was frequently using it to play for at least 3 hours plus. The back is made of a nice feeling soft touch plastic, so not only does it have some grip, I found it to be pleasing to the touch which probably added to the comfort I had when holding it. There are some pretty huge bezels on the front face, but the presence of bezels seems to be more of a presence. On the front you have the camera at the top and in directly in the middle of the display, with the LG logo at the bottom directly in the middle as well. 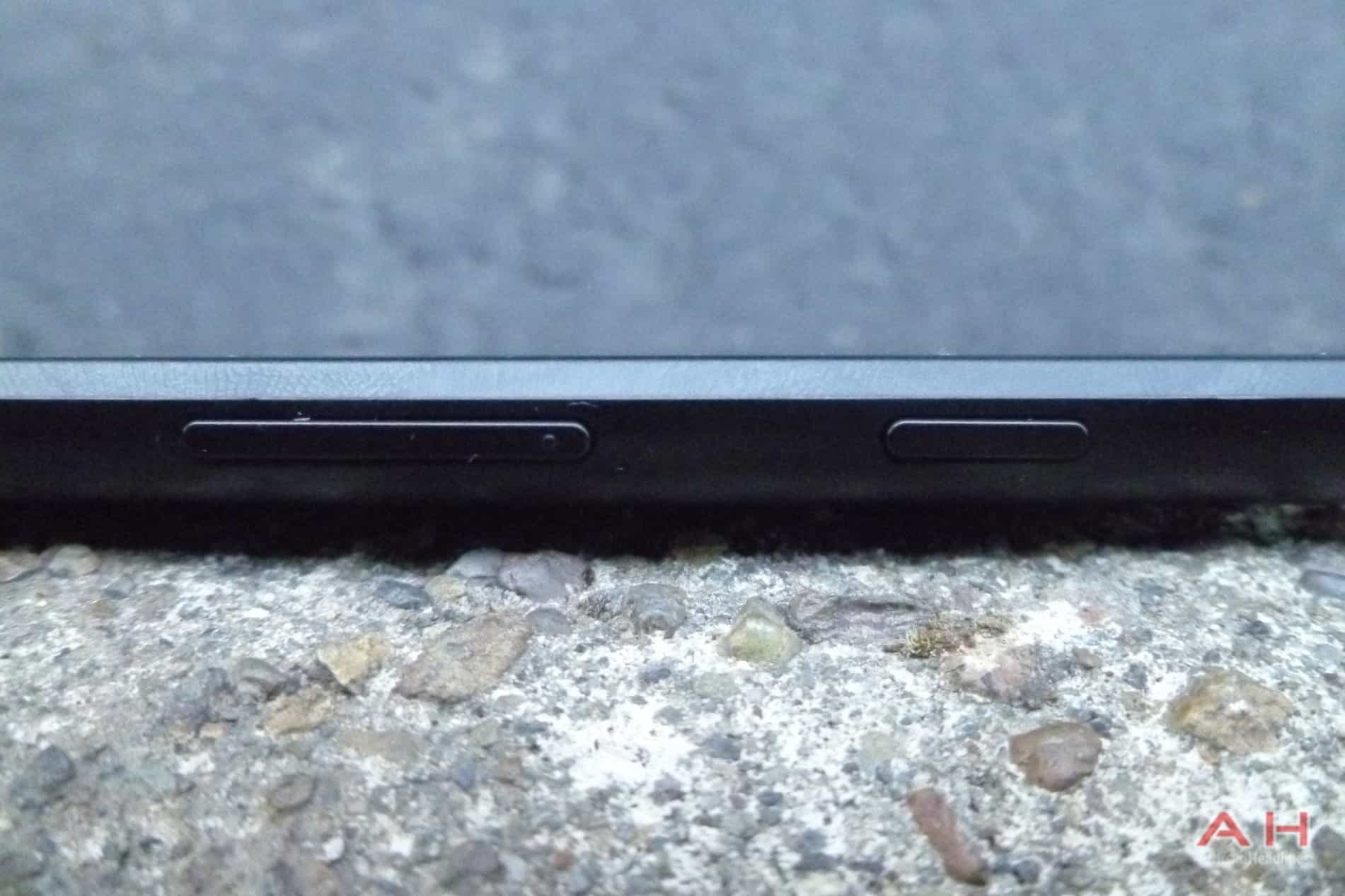 The bottom of the tablet when held in landscape mode actually holds nothing, no ports, no buttons. The volume rocker and the power button are located up top along with the IR sensor, and the right side of the tablet is clean as well, so the left is where you'll find all your open ports like the microUSB charging port, the 3.5mm audio jack, and the microSD slot if you're planning on expanding on the 16GB of storage. The speakers are located on the back on the left and right sides towards the bottom, which to me feels somewhat of an odd placement as this is where I hold the tablet, however it didn't seem to lessen the audio any. The rear camera is located on the back in the top right corner. 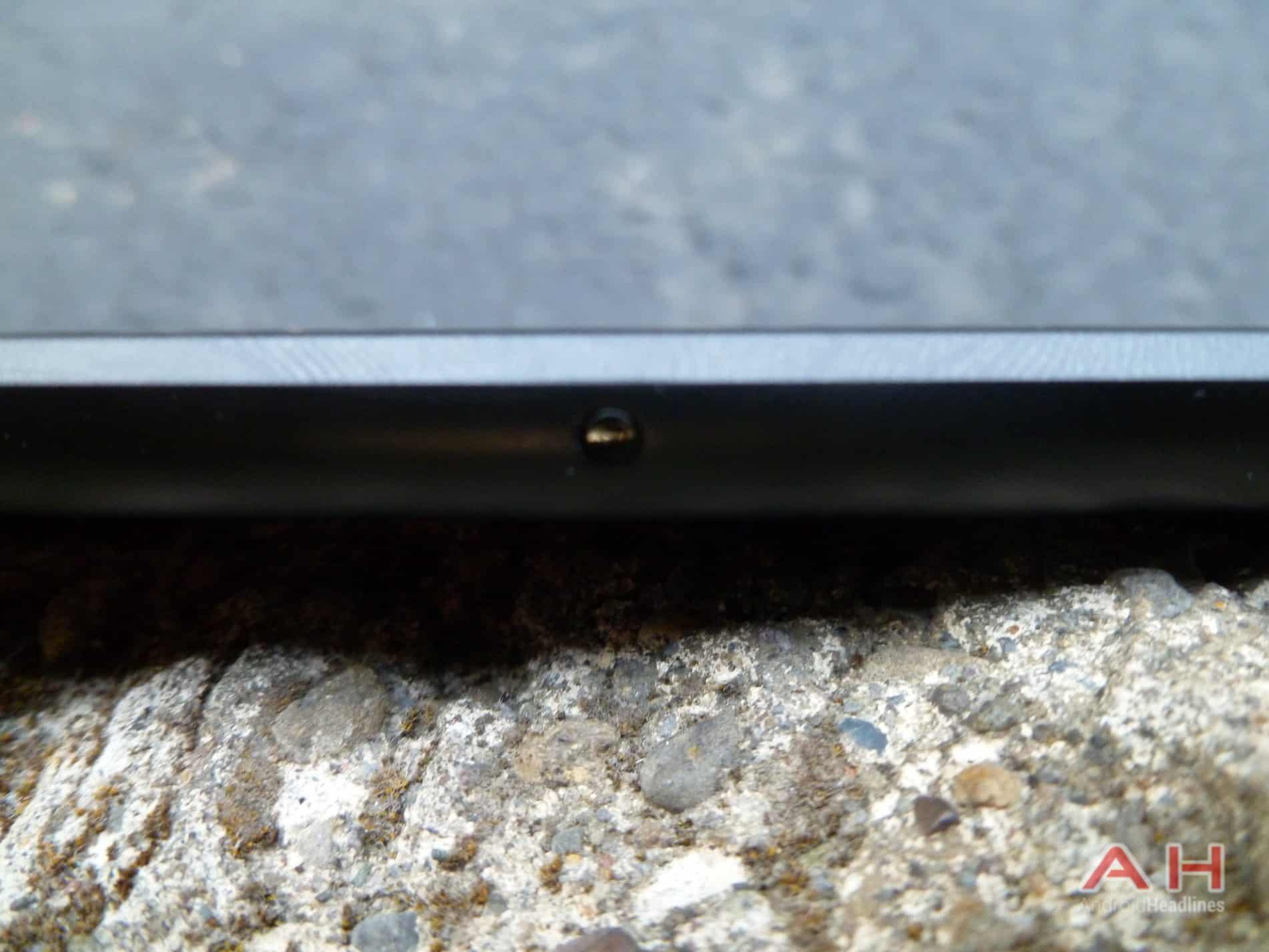 The screen on the G Pad 10.1 is decent. It isn't fantastic, but it isn't terrible. It's bright which is nice, it just feels less sharp and vivid as some of the other tablets that we've used, you'll also notice some pixelation of imagery from time to time. When it comes to the processor, we're only talking a Snapdragon 400 with 1GB of RAM, so you should expect to see some lag with general functions and things like screen animations when backing out of apps or transitioning between menus but not always, however I found this didn't really bother me personally. Where the lag became a little more noticeable was during high performance and demanding games, although that might not bother others if the tablet won't be meant primarily for gaming. The speakers were actually pretty decent, as the audio was loud and came through quite nicely during games and videos. 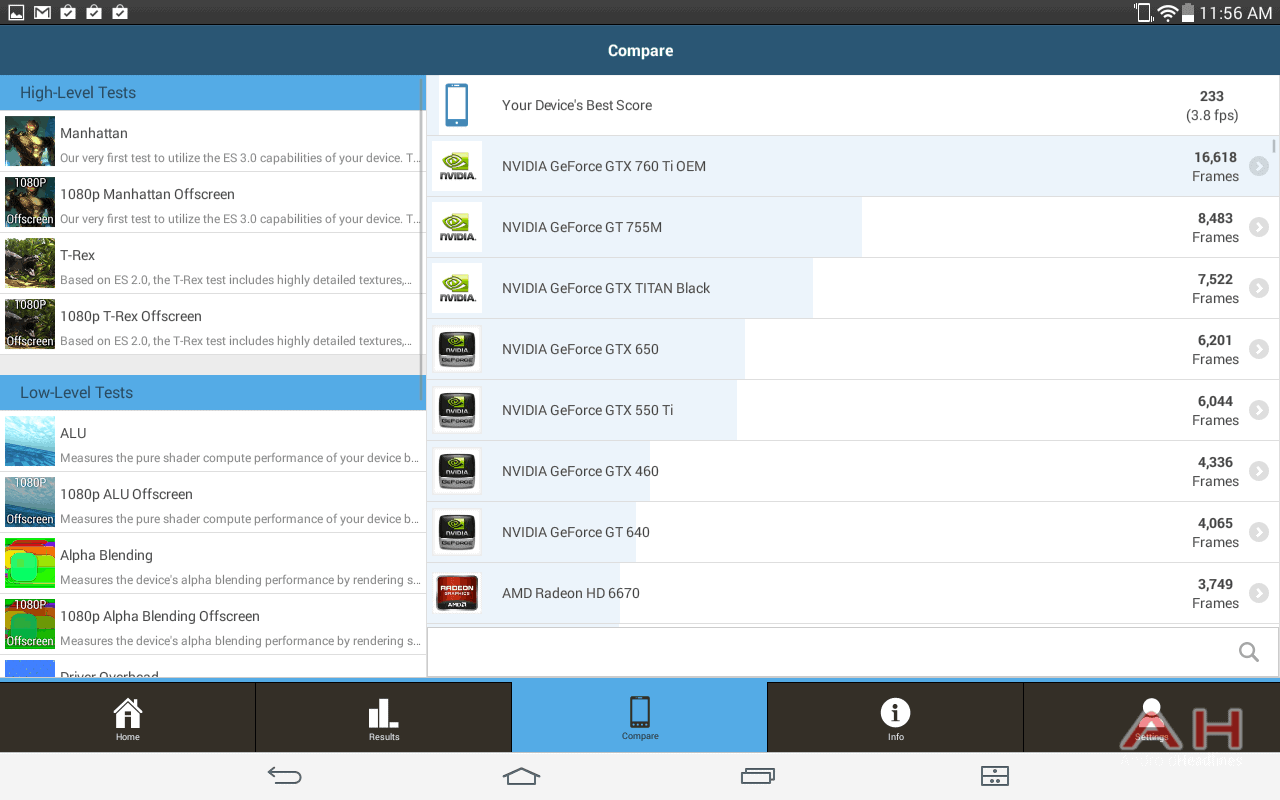 Although we pretty much got the feel of how this tablet performs just by using it, we put it through the standard benchmarks one might use to check the performance and graphics. We used Quadrant Standard, GFX Bench 3D Benchmark, and AnTuTu X Benchmark to check the tablets scores which you can see below. 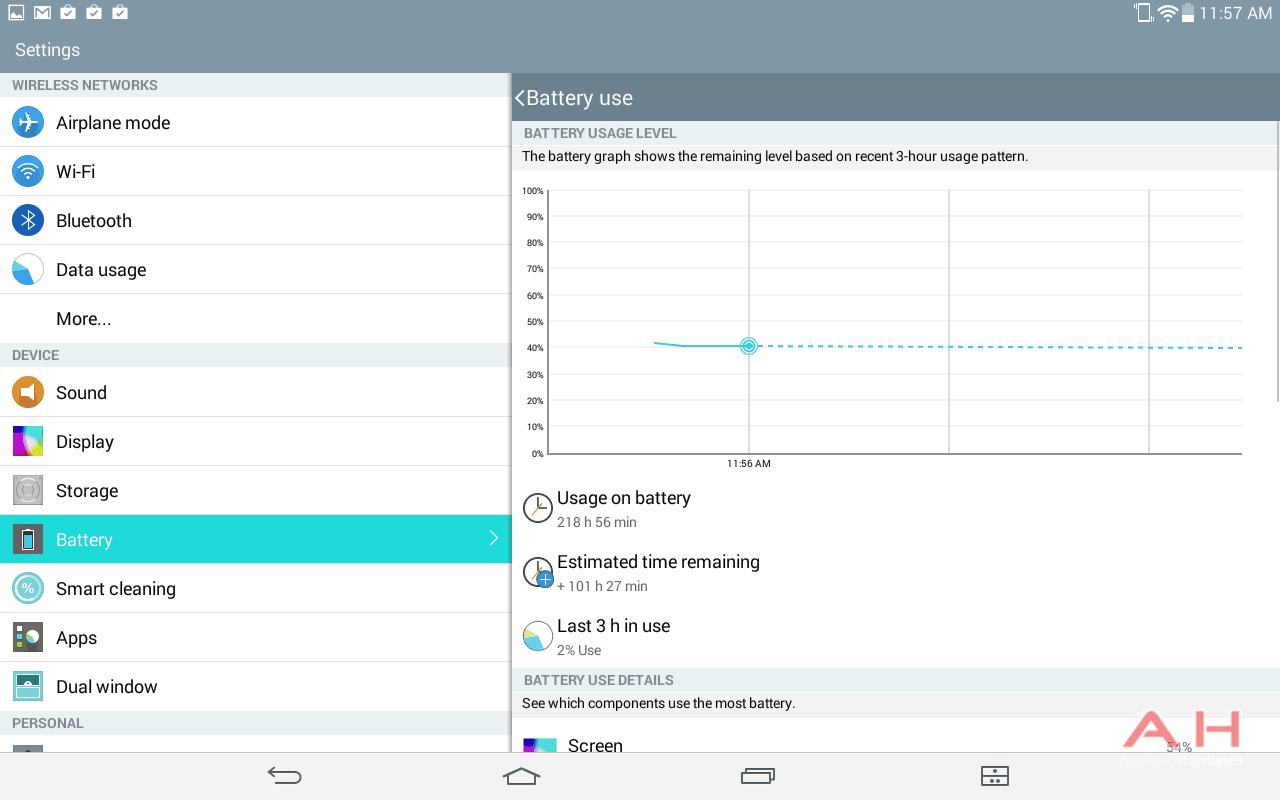 If there was one thing and one thing only you should buy this tablet for, it's the battery life. 8000 mAh is an insane amount of battery capacity for a tablet that houses a screen and processor like this one, and as I stated above the G Pad 10.1 has been sitting on battery usage for quite some time. It currently sits at 42% and there is an estimated time of about 101 hours and 27 minutes left before it completely discharges, and that's after it has already been discharging for nearly 219 hours. All of that is without the battery saver feature turned on. Furthermore, the battery saver feature has never been turned on since I've had it. However, should you find yourself in a position where the battery is draining quicker than it has been for me and need to get the most out of the battery that you can, turning on battery saver should be your saving grace. 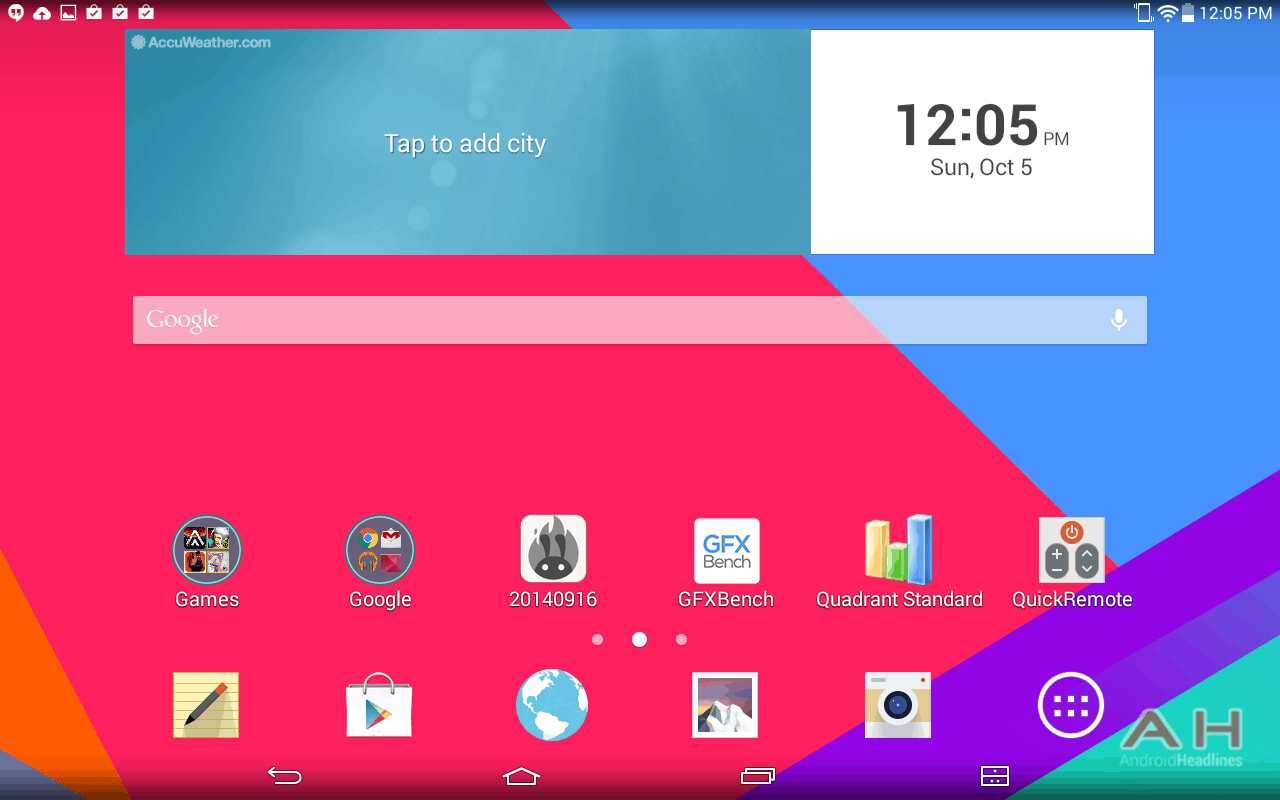 The G Pad 10.1 houses the same minimal type software as found on the LG G3 and many other LG devices this year. It's lightweight, low on memory and doesn't feel cluttered in the least bit. With the flat style design of the icons it also looks quite nice. It's not as minimalistic as Sony's, but it's pretty close. You'll find useful tools as part of the LG UI like the quick remote feature, which works quite well and actually supports a wide range of different televisions. Mine is a Samsung smart TV for example and it had no trouble finding and syncing to it. The Knock Code and Knock On features are present as well, and Knock On is something that has felt indispensable as it's easier to unlock the screen by double tapping than by hitting the power button. This is a 10.1-inch tablet after all and the power buttons is located at the top in the corner. Since this is a standard WiFi version of the tablet without a carrier, there is almost no bloat at all, just a selection of a few different LG based apps. 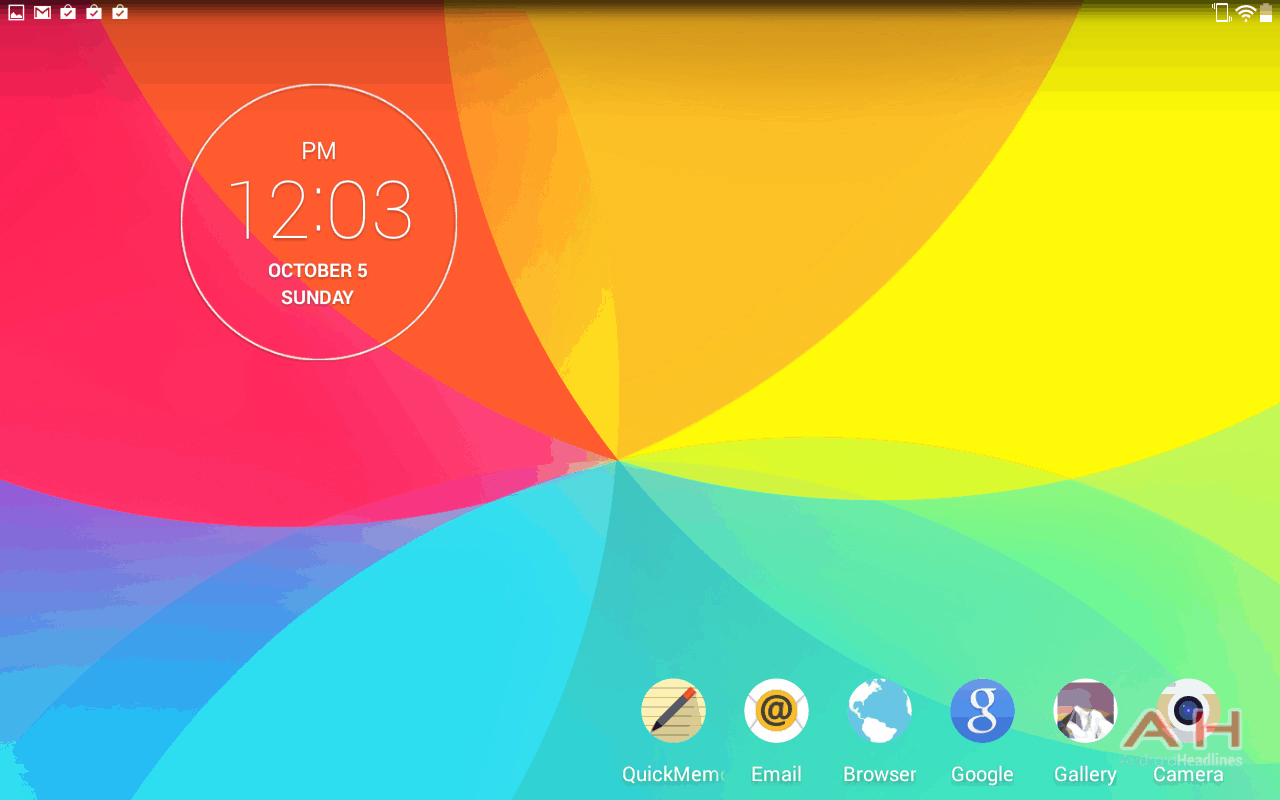 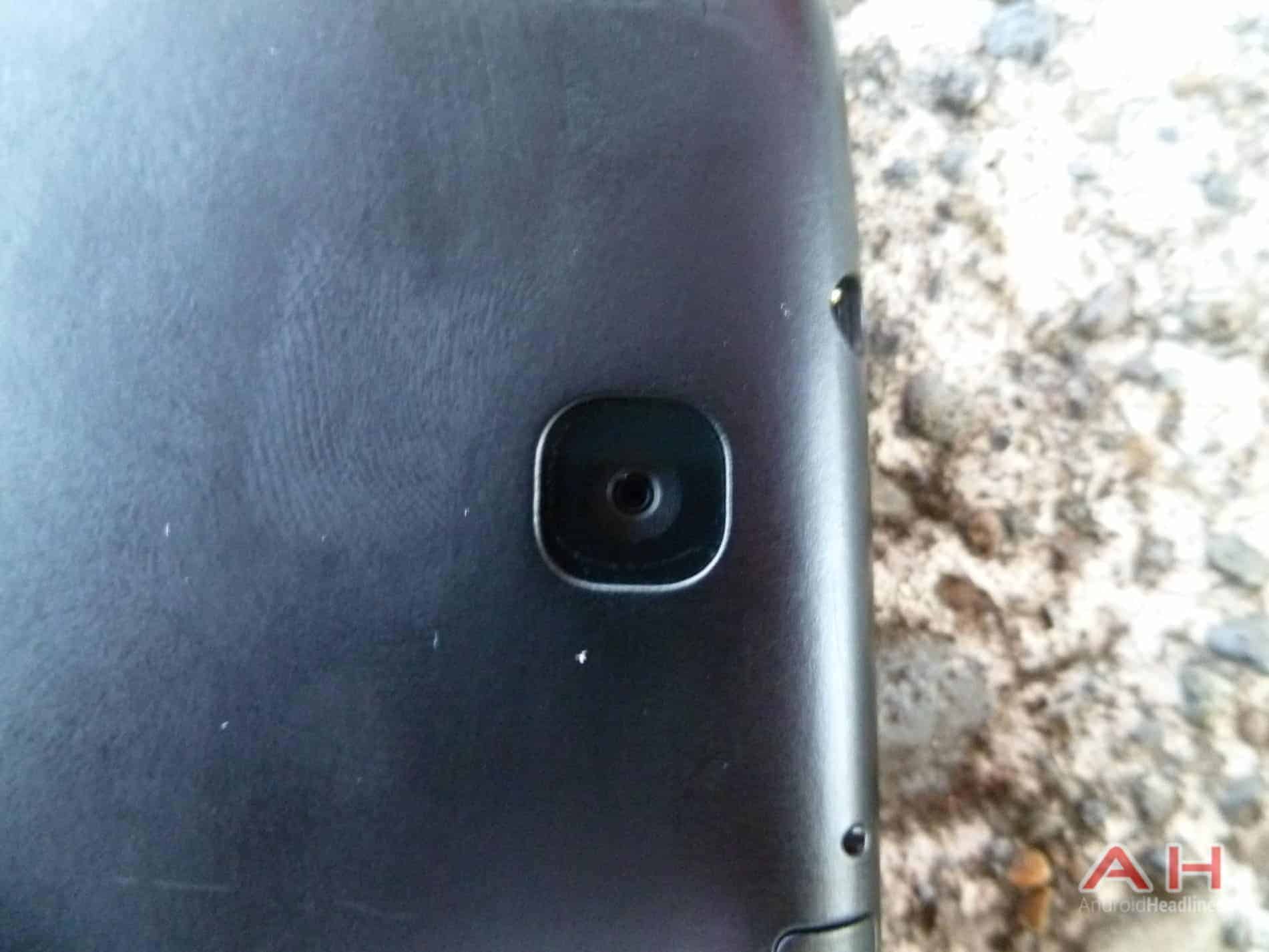 The camera UI is about as minimal as it gets. You have the back button to exit the camera view finder, and the three-dot menu/settings button in the top left corner of the screen, leaving the view finder uncluttered and open-feeling so you can see fully what you're shooting. Although you probably won't be taking many pictures with the camera anyway as it's not the best quality. The pictures still come out decent though and taking a picture couldn't be simpler thanks to LG's tap to snap action within the camera UI. Just tap on the area of what you're shooting on screen and the camera will auto-focus and take the picture. 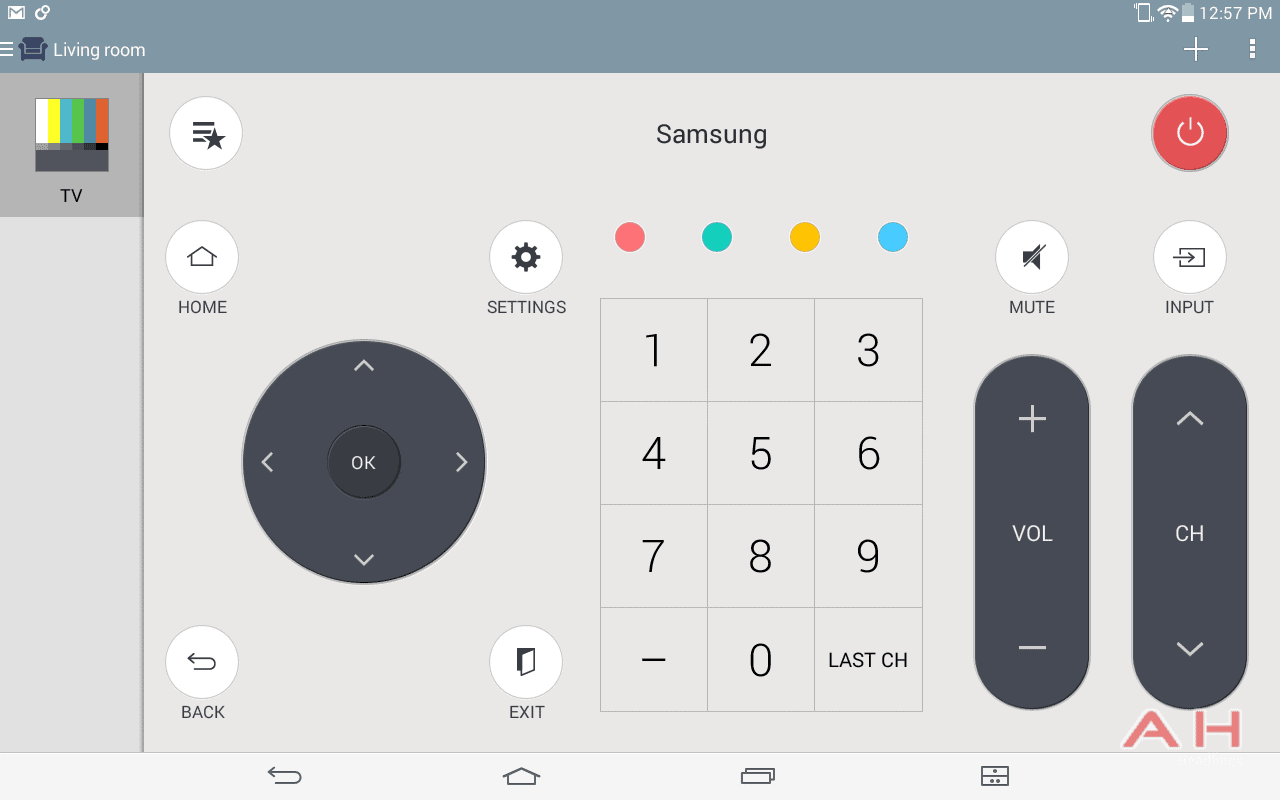 This is one extremely useful little feature. Should you have misplaced your TV remote and need a way to keep from having to get up and manually change channels, manipulate the volume and power the TV on/off, Quick Remote can help with that. I was surprised to find out that it had no trouble linking up to my TV, and short of the slight lag in response to the actions I was completing, it works pretty well. The only issues were that you have to pretty much point the IR sensor directly at the IR receiver on the TV or it won't work, and that response is just a tad bit slow after hitting a button on the screen. This wasn't the case with the Galaxy S5 which also has a remote feature, where I could point the phone in the general vicinity of the TV screen and it would respond quickly and accurately. Still, it was pleasing to have.

The LG G Pad 10.1 is not my first choice for a tablet. Frankly, I would personally spend the extra $80-$100 and just grab the Nvidia Shield Tablet, but it all really depends on what you want out of a tablet in the first place. Battery life is superb, but it is a bit lacking in other areas like performance and screen resolution. If these things aren't high on your list though of required tablet attributes, the LG G Pad 10.1 is a great choice for bigger screened browsing, and all other manner of functions that you might otherwise use your smartphone for.