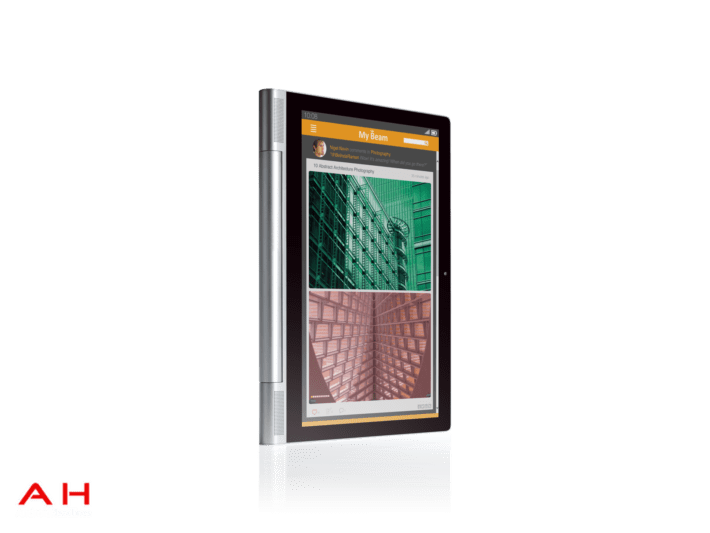 Lenovo has announced two new Android tablets today, the Yoga 2 in 8-inch and 10.1-inch sizes. Both of them offer some interesting features that users will no doubt find genuinely useful, but much like people did with the original Yoga Tablets, the specs leave more than a little to be desired. Lenovo has one more Android tablet to announce though, which should go a long way to quelling any concerns of specs and features of the other two. The Yoga Tablet 2 Pro is a 13-inch 2560 x 1440 device that also features a built-in Pico projector to create a 50-inch viewing experience on any flat surface.

On the inside, the Yoga Tablet 2 Pro sports the same software build running on top of Android 4.4 KitKat and the same quad-core Intel Atom Z3745 running at 1.8 Ghz with the same 2GB of RAM. Where this 13-inch guy gets the 'Pro' moniker is from its 13-inch QHD display, the 32GB of expandable storage and an exceedingly impressive sound system for a tablet. Lenovo is positioning this as the best media-consumption tablet out there, and thanks to the JBL sound system that has two large front-facing speakers at 1.5W a piece as well as a dedicated sub-woofer with 8W output we're inclined to believe Lenovo here. Of course, sound is just one part of it, as the Pico projector included can push a 50-inch image at 16:9 with what Lenovo is calling a 'high-resolution' image, which we're assuming to be no higher than 1280 x 720 from such a small projector.

The Yoga Tablet 2 Pro features all of the same features as its smaller siblings, including the new hang mode, but the battery life is only rated at 15 hours rather than 18, which is probably due to the massive QHD display on the front of this thing. The Pico projector will take a lot of juice as well, and is rated for three hours of playback, which is only really good for three episodes of Game of Thrones, but if you were serious you'd have packed a charger. The same 8-megapixel and 1.6-megapixel rear and front-facing cameras are included and so too is support for dual-band WiFi.

Overall, it sure looks like Lenovo has a pretty potent media device on their hands, with a true sound system as well as a Pico projector, the Yoga Tablet 2 Pro is certainly no slouch and perfect for those who just want a great viewing experience. Of course, at $499 (to be available from the end of October) it's going to be a tough sell. Just how much do you want that big, high-resolution display and a Pico projector to show off to your friends.