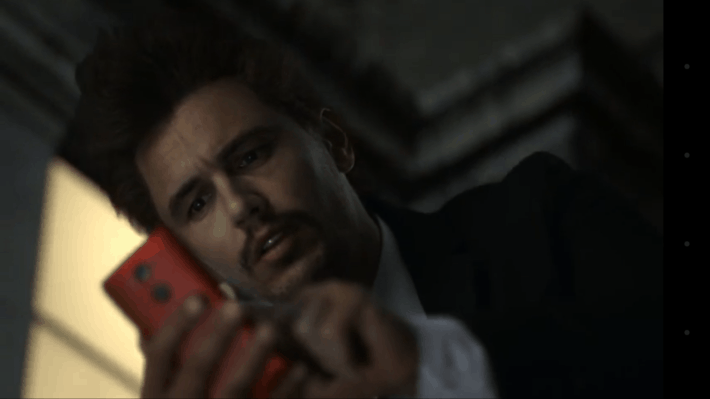 Tuesday in New York, was the launch day for the Motorola and Verizon joint-venture otherwise known as the Motorola Droid Turbo. However enough about that. The day before was just as interesting for Droid fans as the Droid Turbo's dedicated Twitter account @droidlanding started releasing random videos. One was dubbed 'Gargoyle' and the second was dubbed the 'Phantom Rider'. There were two connections between the two videos. Firstly, they were obviously both promoting the Droid Turbo and secondly, they were rather strange. The Gargoyle video was simply an 8 second loop which showed a part of a Gargoyle, a red scarf and an outstretched hand. The second video starred randomly James Franco riding around on a bicycle and disappearing at Turbo speed.

Well it now seems we can shed some light on the connection between the two videos. Verizon today have now added a full one minute video advert for the Droid Turbo to their YouTube channel and it is staring both Franco and the mysterious Gargoyle. Yes, the new video certainly explains what all the Gargoyle business was about and it seems it was not really anything to do with Halloween as expected. Instead, the video shows Franco and a lady on top of a building. The lady has dropped her scarf and Franco is reaching for it but falls off the building. Instead, of simply falling to his death like you or I would, Franco turns to his Turbo which (while falling) helps him calculate where to land, a new trajectory and even a translator so he can ask a question to someone after landing.

If that was not enough of an advert for the Turbo, Verizon also managed to squeeze in comments about the Droid Turbo's 2.7GHz processor, its Kevlar build and also a quick demonstration of the Turbo's Quick Charge feature. Not bad for a video that only lasts a minute in length. As always the video is below for your viewing pleasure and you should give it a watch. As well as starring Franco its quite a good video. But its not recommended for any soon-to-be Turbo owners to try and reenact what you see. The turbo might be fast but pretty sure its not that fast.