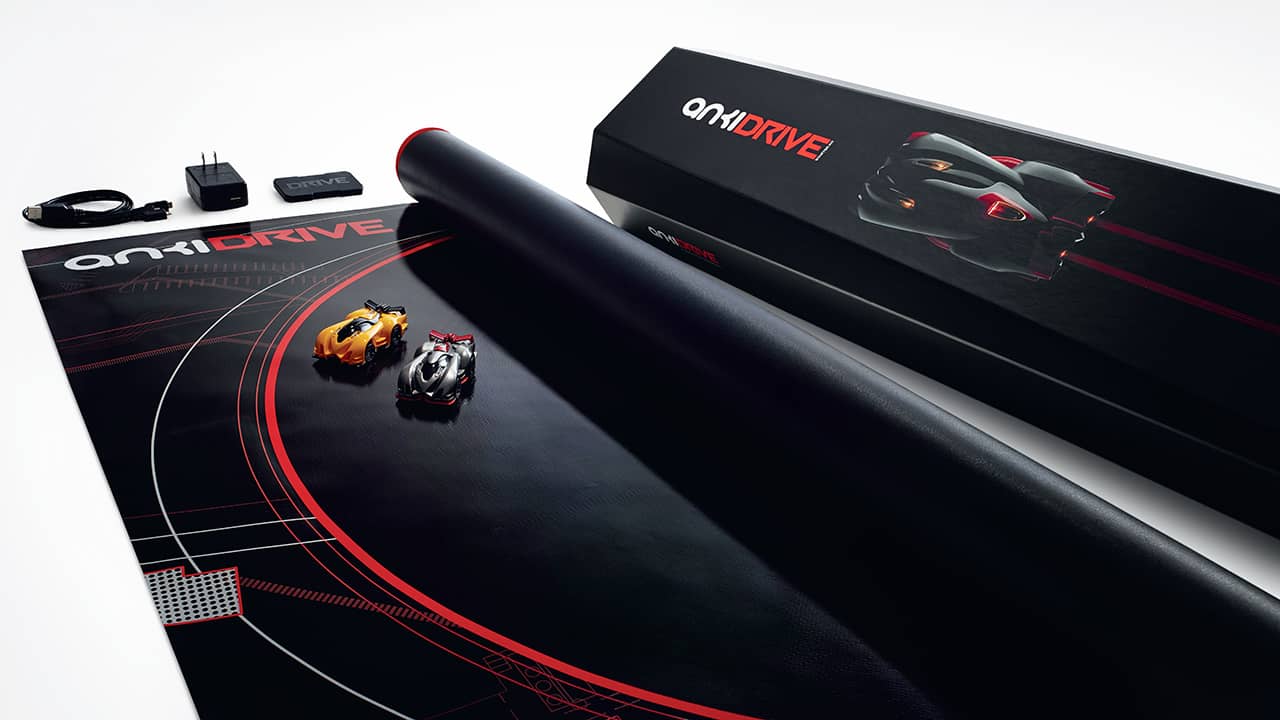 The Anki DRIVE is part toy, part video game that uses a smartphone to control a robotic car, which runs on a special track designed to run on a flat surface. The game represents a blend of the old fashioned slot racing games with new generation electronics and artificial intelligence (and guess what: it's mean; it's out to get you!). The track is a 260 by 107 cm piece of vinyl, which is embedded with thousands of instructions that are read by the cars as they go over it. This is how the game knows where each car is and its velocity. Because the cars run on a mat, rather than a slot-based piece of track, there's no more replacing the car back into the track when it falls off the edge. The starter set comes with two cars but up to four cars can run in any one game, which until now has used iOS devices to control the cars. Now, Anki have announced that the game has been opened up for Android users. Currently, only a six devices are supported (the Samsung Galaxy S4, S5, Note 3, 4 and 10.1 (2014 Edition), plus the LG Nexus 5. Anki's blog tells us that they are working hard to bring compatibility to other devices, blaming the lack of support for Bluetooth LE, or Low Energy. At the moment, iOS and Android users can't play together and all Android devices need to be connected to the same WiFi network for co-operative play.

The starter kit costs £150 or $150 with additional tracks and cars are available. The advantage of buying more cars is that it gives players much more time at the same: it takes inside ten minutes to recharge a car over MicroUSB using the docking station, which gives you approximately twenty minutes of driving time. If you have more than one car, you can be recharging one whilst driving the other. Each car is £50, which is a lot but then let's consider what's actually in the car: these work using an in-built camera to scan the track and have an artificially intelligent system that learns from each race. That's where Anki gets the name from; in Japanese, it means "learn by heart." It's this in-built intelligence that helps keeps the cars on track and records where each car is in the race. The cars also include special abilities, skills and weapons. You can shoot your opponent and if you score enough hits, you'll shut down their engine. Some cars have a tractor beam to pull other cars closer, a shield or a speed boost. Oh, and using your weapons slows your car down… the game is strategic as well as tactical. Check out this video below:

Currently, then, the game is a little compromised on the Android platform compared with iOS, but I'm encouraged that Anki are working on improving the Android situation. I'm confident that it'll be made compatible with more and more devices and hopefully, we'll see the ability to combine iOS and Android devices on the one mat. But this is one toy that I'd love to find under this year's Christmas tree! You can buy the game from Apple Stores (just don't bend the iPhones!), Game, BestBuy and Gamestop.