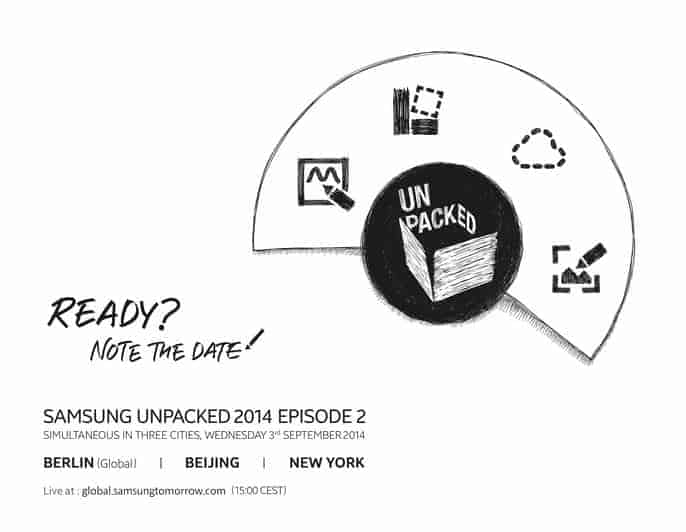 Samsung is set to unveil the Galaxy Note 4 this morning, along with a few other goodies. We're expecting to see a few more smartwatches, more info on the Gear S and Gear Circle, as well as the Gear VR in addition to the Galaxy Note 4. But of course, the highlight of the show will be the Galaxy Note 4. That is what we go to see each year around this time. We've seen a few rumors of the Galaxy Note 4, but they are the typical ones we see just about every time Samsung is about to announce a new flagship device.

As far as specs go, we're expecting a 5.7-inch Quad HD display, Qualcomm Snapdragon 805 or an Exynos processor (likely will be market dependent), 3GB of RAM, 32GB of storage and a 16MP camera. We are also expecting to see a slightly larger battery. Maybe bumped up to a 3500mAh battery? Of course, none of these specs are confirmed just yet. We are just going by leaks and what other flagships are sporting right now on the market. Samsung will also add all kinds of new goodies to the Galaxy Note 4 in terms of software. As they always do.

With the Galaxy Note 4 is mostly about the S Pen. So I'd expect to see a slew of new features for the S Pen on the Galaxy Note 4. Additionally there's the Gear VR headset, which is basically Samsung's answer to Google Glass. It also wouldn't surprise me to see a few new smartwatches at today's event. As Samsung has already released about 5 smartwatches this year.

As far as times go, everything kicks off at 3pm in Berlin. So what time is that in your area? Well that's 2pm in the UK, 9am on the East coast of the US, and 6am on the West coast of the US. What are you most excited for? Let us know in the comments down below.