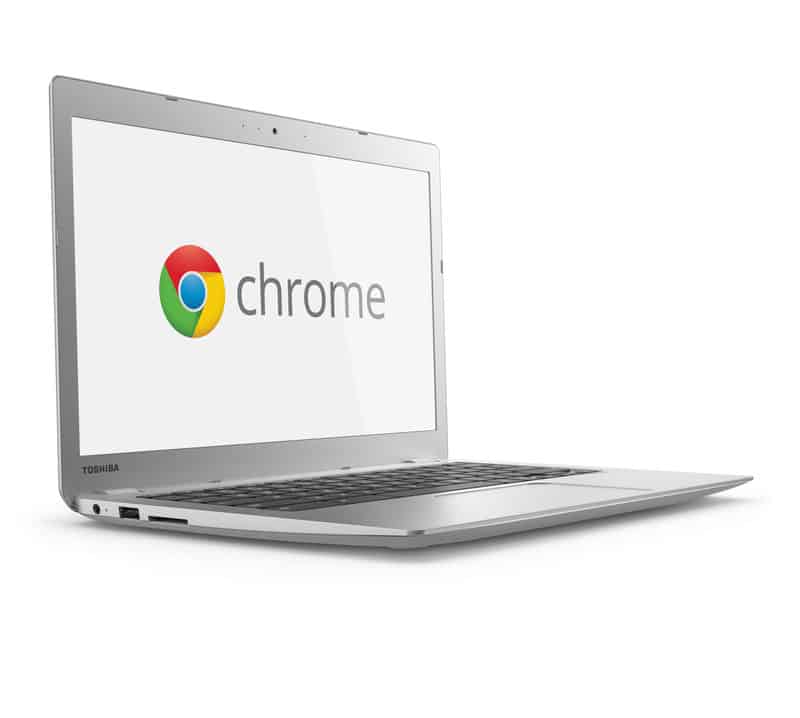 A few days ago we reported the news that Toshiba were getting ready to release a new Chromebook and we now have a bit more information to give you. In our last update we advised the Chromebook was 13.3" in size and was an update of the same device from earlier on in the year with the exception of the Intel Celeron Haswell processor being replaced by an Intel Celeron dual-core Bay Trail chip. The newer processor will clock 2.16GHz and the device will include 2GB RAM, 16GB SSD for storage and expected to come with a battery lasting 10.5 hours. Well according to OMG Chrome, an unnamed source has advised there are actually two models in the pipe line. It is expected Toshiba will make the devices available to purchase form November although again the source has suggested the devices will probably be available to purchase before the expected November release.

So what is the difference between the two? Well, as to be expected the first and obvious difference will be the price with Toshiba releasing a budget version and a slightly more premium version. The budget (or cheaper) Chromebook will come with a standard HD screen resolution (1366×7568), the 2GB RAM (previously reported) and an expected battery life of 11 hours. This device is expected to be priced at the $249.99 marker. In contrast the second (premium) Chromebook will come with Full HD resolution (1920×1080) and a much more receptive 4GB RAM. However, the expected battery life on this device is somewhere around 9 hours and this shortfall is being blamed on the increase in pixel resolution which inevitable will pull a bigger battery current. The second Chromebook is expected to sell for $329.99. Both devices will contain the expected Bay Trail processor and so in fairness the difference of $80 is not that massive when you compare the doubled RAM and increase in resolution from SD to HD although the lack of the battery compensating effectively is a little disappointing. Regardless this is the newest information we are hearing about the Toshiba Chromebook(s). As mentioned it is expected that the devices are supposed to launch 'officially in November although the source providing the information to OMG Chrome are saying the Chromebooks will ship before this date. Either way, it won't be too long now until they hit the market.

London, UK, 3rd September 2014 – Toshiba UK today announces the Chromebook 2 – a new 33.8 cm (13.3") Chromebook for users wanting to enjoy entertainment and productivity on the move. With a choice of Full HD IPS or non-reflective HD screen, and invisible stereo speakers tuned by Skullcandy®, Toshiba's Chromebook 2 delivers impressive sound and vision whilst offering everything required for work, play and study.

Quality entertainment anywhere
Toshiba's new Chromebook delivers a high quality entertainment experience that users can take and enjoy everywhere. The bright, crisp 33.8cm (13.3") display is available in both the stunning definition of Full HD to really bring movies to life and HD for crisp detail. Whether browsing the web, playing games at home or watching videos on the move, users can immerse themselves in every detail. To complete the entertainment experience, stereo speakers tuned by Skullcandy® are hidden away under the keyboard providing more depth and distinction to every note.

Portability and performance combined
Weighing just 1.35 kg, and featuring a thin tapered silhouette, Toshiba's Chromebook 2 was made to travel light and is the perfect balance of style and mobility. The solid edges and blast silver finish with dot pattern gives the clamshell design a sleek, modern finish. Portability is further enhanced with a battery life of up to 11.5 hours to provide all day use on the go without the need to connect to a power source whether browsing the web in a caf© or travelling. Add to that the power of the Intel® Celeron® processor, and users can get straight to being productive or staying entertained, all day long.

From a fast start-up to getting online with Google Chrome, there's no waiting around with Toshiba's Chromebook 2 as users can quickly access all their updates, apps and stored files. With the ability to open existing familiar file formats and work on them offline, users can enjoy a consistent experience across all their devices and make sharing easier. The added convenience of a full-size frameless tile keyboard with large click pad increases ease of use.

Easy and effective communication
The high quality HD webcam enables users to experience incredibly clear video conversations with their friends, family and colleagues. The sharp picture and smooth video, combined with dual microphones for noise reduction mean users can hear their audio clearly without background distractions at a time and place that suits them best.

Simplified storage that's highly accessible
Toshiba's new Chromebook is perfectly set up for users to store data in the cloud. With Wi-Fi® connectivity and 100 GB of free cloud storage via the pre-installed Google Drive, data is automatically backed up and synchronised making it easy to save, edit and pass information across different devices.

As part of the Google Drive service, users can also enjoy the use of Google Docs which facilitates the editing, sharing and use of files online plus access a wide choice of Google apps pre-installed or via the Chrome Web Store. Syncing and sharing files between mobile devices is simple too, as this Chromebook is fully compatible with AndroidTM phones.

Essential connections
With Toshiba's Chromebook 2, connecting to other devices is quick and simple. Two USB ports make it easy to transfer data at speed and because the USB 3.0 port also supports Sleep-and-Charge, there's the added advantage of portable power. Users can charge their smartphone or MP3 player while the Chromebook 2 is sleeping, for a convenient boost on the move. Entertainment can be extended to a larger external screen using the HDMI® port while with the SD media slot, users can quickly and easily switch photos and other files between compatible devices.

Toshiba's Chromebook 2 will be available in the UK during the first quarter of 2015.