Description: Chess – Play & Learn is a game from the owners of Chess.com, a well known name in the world of Chess for those looking to play online against other keen Chess players. Now, they’ve developed a quality game for Android that not only allows existing members of Chess.com – as well as new ones – play online, but also helps teach people just how to play Chess properly, with interactive lessons. Unlike other Chess games, this goes beyond just pitting you against someone else out there online, and can genuinely help you improve your game and hone your strategies. So, let’s take a look and see if Chess – Play & Learn can turn me into a grand master.

How it Works: If this is your first time with a Chess.com product, then you’ll need to download the Chess – Play & Learn game from the Play Store. From there, you can either sign in with your existing Chess.com account, or go ahead and create one – its complete free and only took me a couple of moments. 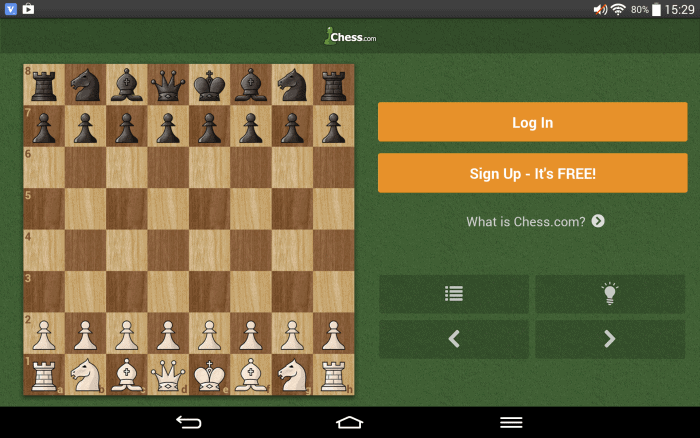 Chess asks you what you’re skill level is and it’s important that you weigh up this decision properly, as this will match you with other opponents online. 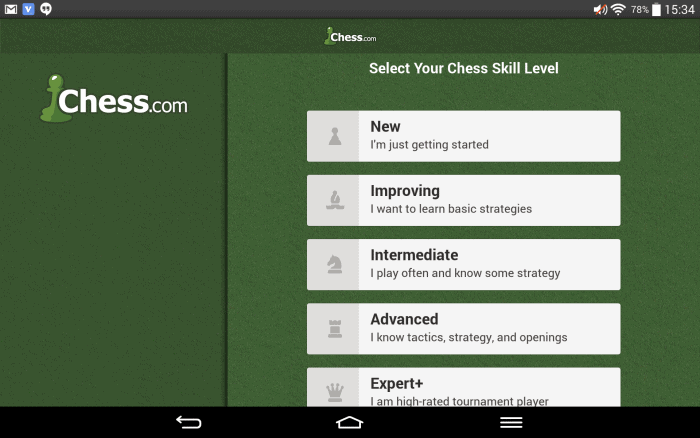 Chess – Play & Learn is much like other Chess games out there, but it’s developed to a higher standard than others, it looks good on tablets for instance, and the menu system is nice and clean, with some excellent themes to help make the game feel more suited to your style. 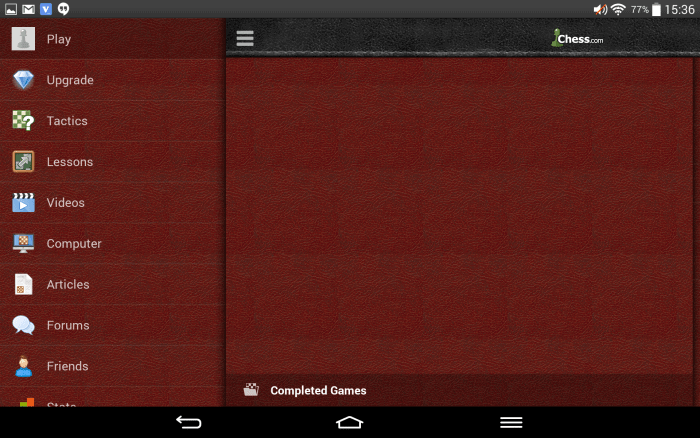 Now, I’m not actually that good a Chess player, my Dad is a little disappointed in me for that, as he’s captained the Nottingham Chess Club here in the UK to a couple regional wins. So, I suppose I should use this opportunity to brush up on my skills. 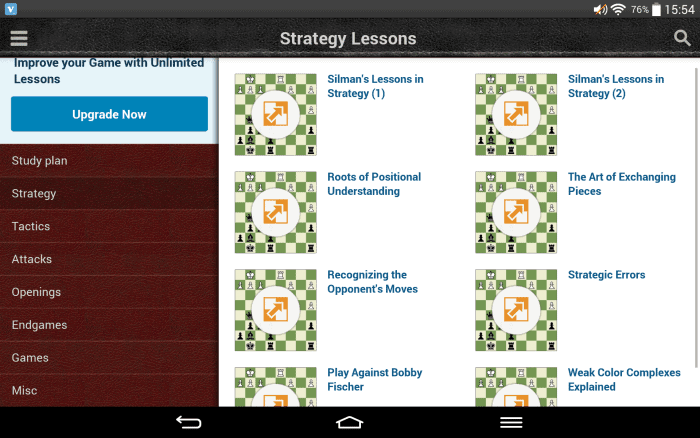 All the lessons are neatly split up into different disciplines, so you can easily work on different aspects of your game, like the ability to practice attacking, something I’ve struggled to get my head around. 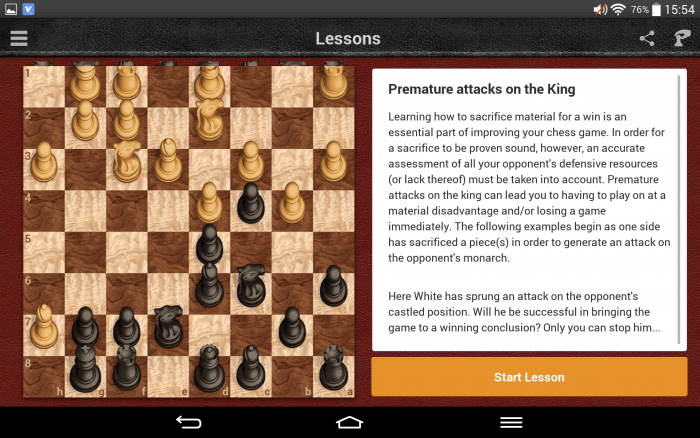 One of the main draws of being able to improve your game with Chess – Play & Learn is the Tactics feature, here you can learn how to effectively attack or counter-attack. Tactics adapts to how good a player you are and then helps you with ideas and the right path to take in a certain situation. The game gives you snippets from an ongoing match, and tasks you with having to figure out the next step. 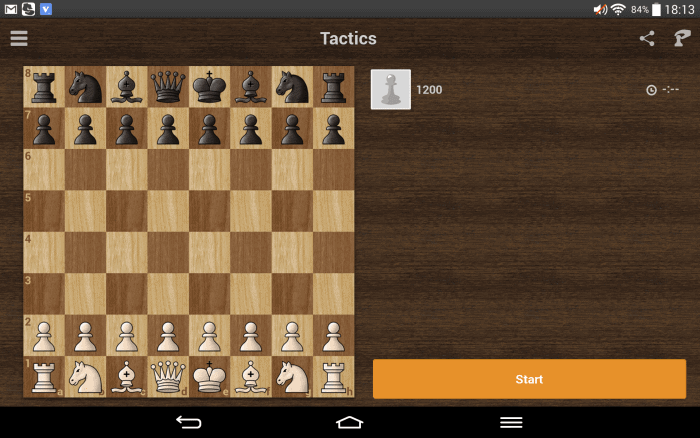 Once you get started, the board will change to highlight an opponent’s attack and the move that they’ve taken. 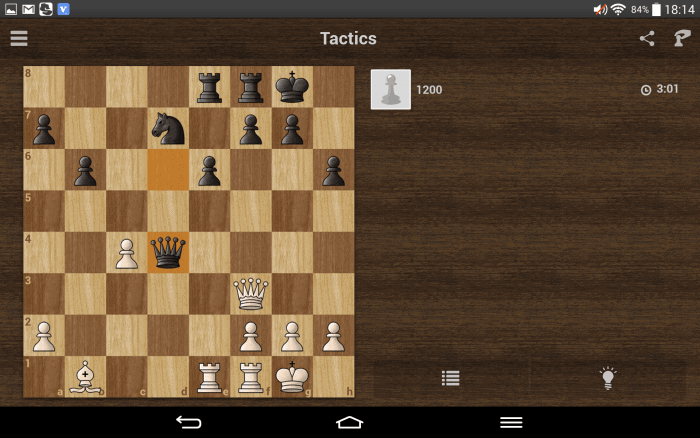 If you take the wrong move the game will gladly tell you if you’ve made a mistake. 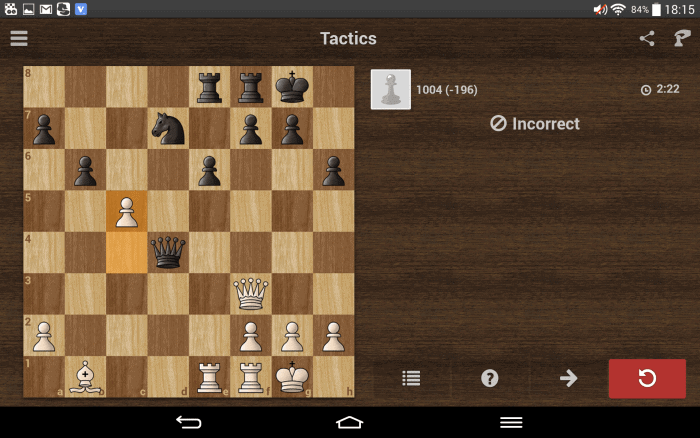 If you need a little help though, you can go ahead and hit the lightbulb and a move that works will be laid out to you. 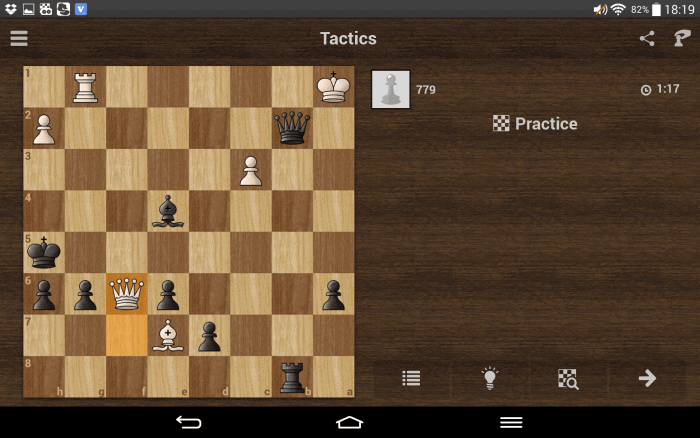 This tactics feature learns how well you’re doing and is a great way of sharpening your skills without the pressure of losing in an online match and it’s far more interactive than other lessons available.

Opinion: As I said earlier, I’m not that good a Chess player. So, what the hell would I know about a Chess game? Well, it’s simple really, my Father is a pretty accomplished Chess player in his spare time, he goes to Chess Club every week and has played for the Nottingham club in England for years. He knows Chess.com well and he said he was very impressed with the lessons that Chess – Play & Learn threw at him on his LG G3, and this is coming from someone who’s paid for a Chess coach before. On the technical side of things, I can see why Chess players will love this game. It’s extremely well polished, actually makes good use of the extra room on tablets, has a modern UI and the themes will really help make the experience feel personal. Coming from a well-known and respected name in the Chess world, there’s no better way to perfect your game, or play along with others for that matter.

Conclusion: If you’ve been looking for a solid Chess game to play on Android that allows you to easily play online against others, then Chess.com is the one for you. With 10 Million players, you’re more than likely already signed-up, but if you’re not Chess – Play & Learn serves an excellent jumping-on point, with interactive lessons that will have you challenging more proficient players with more confidence and you can even theme the game to match your overall style. An excellent Chess game all round, Chess – Play & Learn is something that should appeal to everyone of any skill level or age.