Description: Mobile Hidden Camera lets you take pictures and shoot videos while staying completely anonymous so as not to alert anyone to what you’re doing. The app itself shows no signs of actually performing the actions that it is, and in the app drawer the app is hidden from view and listed as a simple notepad application. The app hides itself in other areas as well, and basically makes it nearly impossible to ever know that it exists on your device in the first place. If you have ever needed an app that could allow you to take pictures and videos without others knowing then this app will allow you to do so.

How It Works: The first thing you’ll need to do is download MHC from the Play Store. Once that’s done you can configure it with a quick few quick steps and you’re ready to shoot secretly with no one being the wiser. Just make sure to remember that it’s listed as “simple notepad” and not to look for MHC for a couple minutes before realizing what you’re doing like I did. 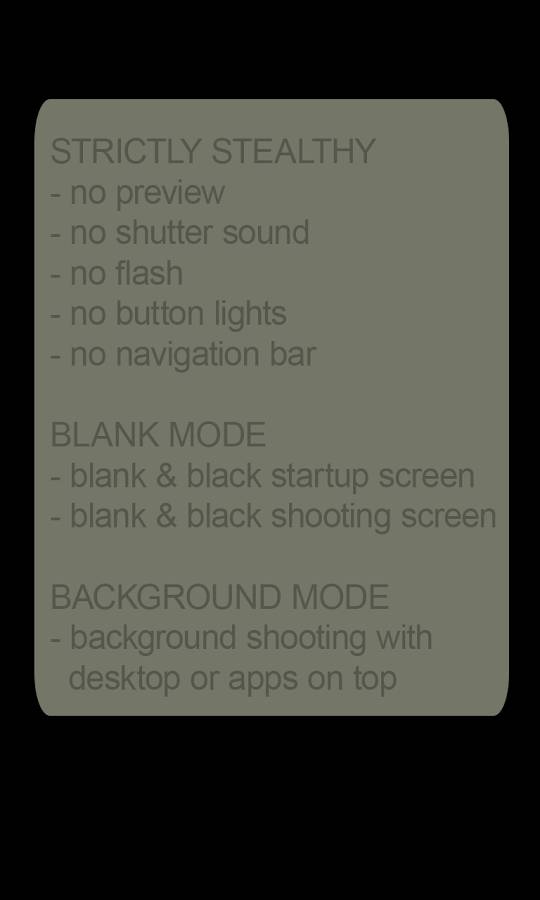 Mobile Hidden Camera has tons of great features for the basic version, including super high quality image shooting and video recording in either 720p or 1080p. 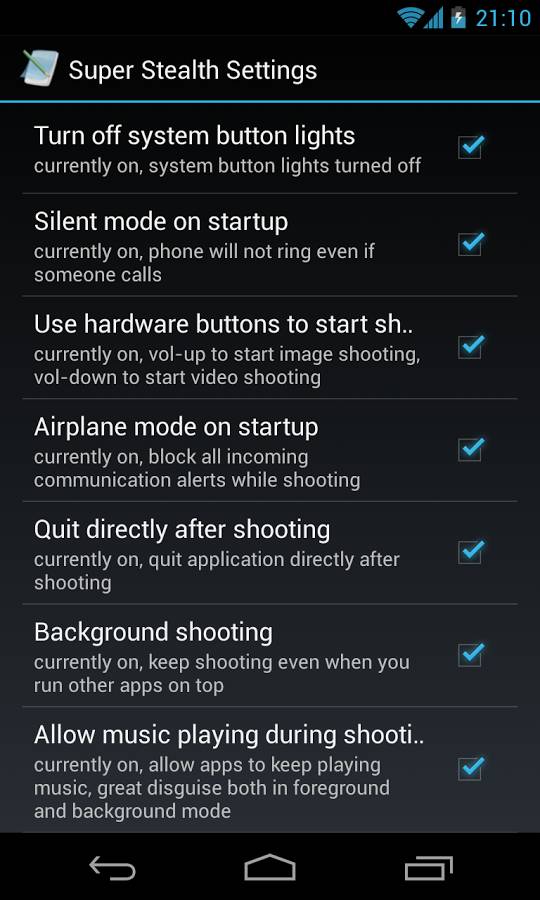 This is also the only spy camera app that is powered by a sophisticated Unified Spy Engine, and the app also supports every single android device from Android 1.1 forward, so no matter how old your device is, the app is compatible. 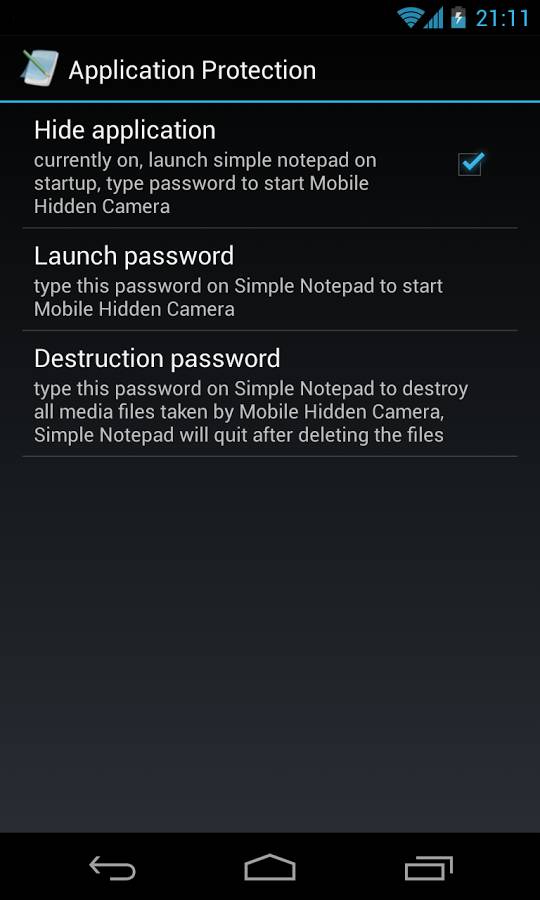 Upon opening the simple notepad application to begin using MHC, you’ll see the buttons at the bottom to perform actions like image or video, tapping on one of those will immediately begin that action. The screen will be blank and shown as a dark screen, with no visible UI buttons anywhere, and taking pictures is as simple as tapping anywhere on the screen. 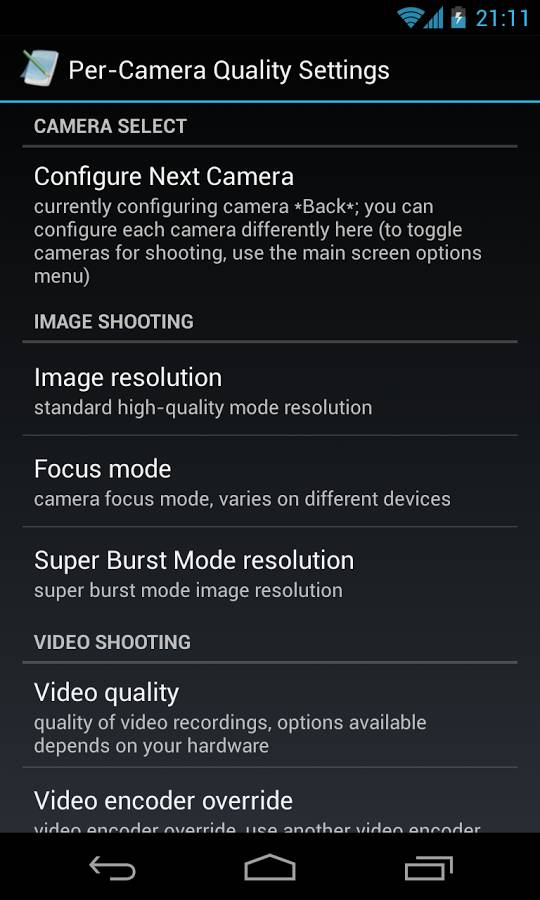 Shooting pictures and video is completely stealthy, as the app can do away with the shutter sound, the flash, and the preview. You can also set up the camera to take pictures in burst mode and get up to 10 pictures per second, this can be turned on in settings. 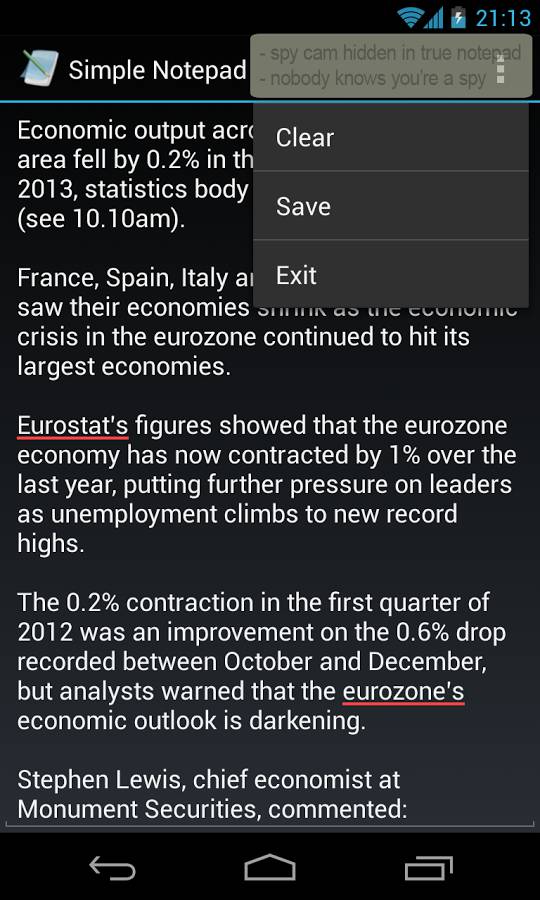 For the advanced features which come with the paid version through an in-purchase, you’ll get the capability to block incoming calls, sms, and email alerts while shooting, and things like unlimited video recording length, timer mode recording, and the ability to shoot pictures and video with hardware buttons instead of tapping the screen. 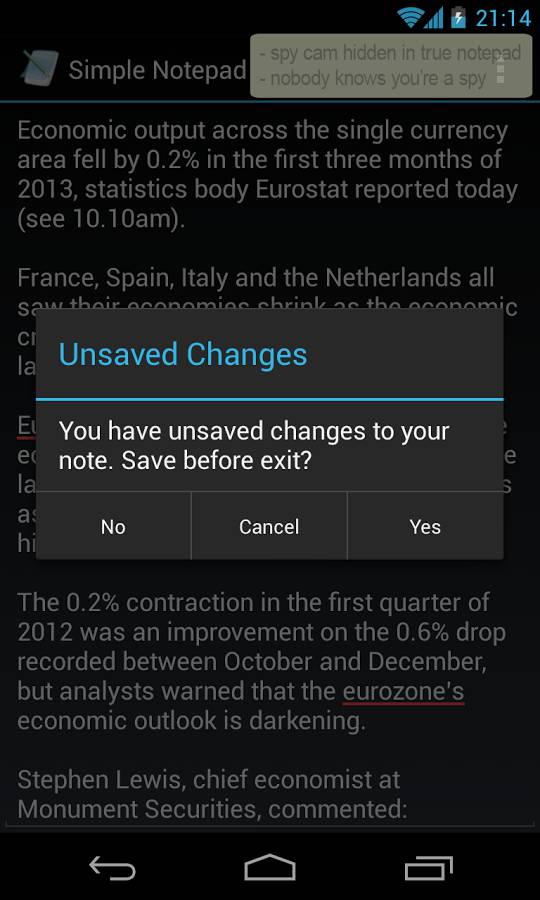 The best advanced feature will let you open and run other apps on top of MHC while it’s shooting in the background, so you don’t have to try and fool anyone. You can even have the phone sitting on the homescreen while it’s shooting in the background so it looks like nothing is happening, making you completely and totally stealthy. You also don’t have to worry about people seeing the images or videos you grab with this application, as the files don’t save to the gallery menu, and it even hides them from other file browsing applications so only you know where to find them. In a pinch and if you’re worried about your safety, you can quickly self destruct the files with a hidden way to erase all media taken by the app. Added to this is the “Hide application” option which, when enabled, would turn the spy camera app into a fully functional notepad app. This prevents anyone from finding things they’re not supposed to, and if anyone should handle your phone and attempt to open up the “simplified notepad” app, it’s truly a simplified notepad app so they won’t notice anything out of the ordinary. All you need to do to enable the spy camera app is open up the notepad app and type your launch password. 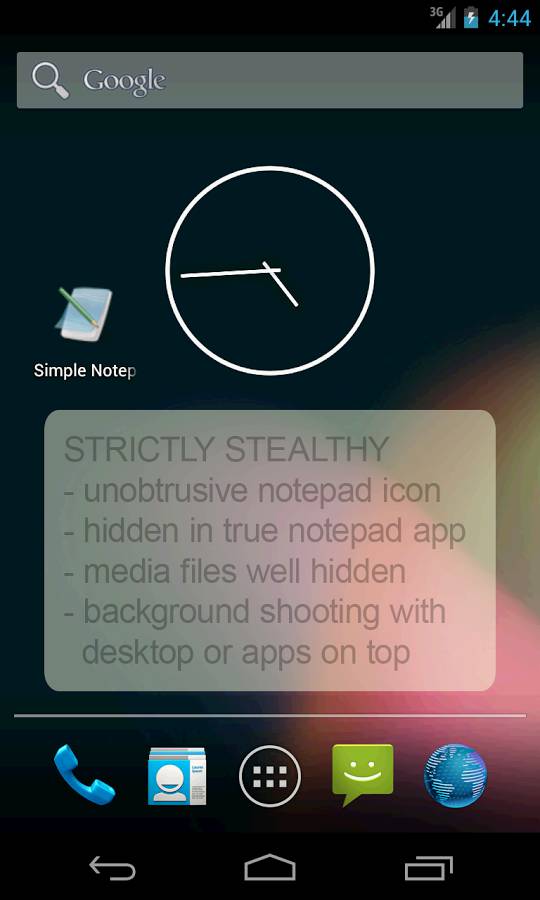 Opinion: Although I personally wouldn’t have need for this type of application often, I can understand the importance of having something like this to use. Complete and total anonymity while using this app makes it so that no one would have any idea that you’re using your phone’s camera to shoot video or take pictures, and it works exactly as described. Everything can be completely stealthy so it would never even look as if you used the camera at all. Being able to run this in the background under other apps just adds to that layer of stealth so it just looks like you’re using other normal apps on your phone. It also works with both front and back cameras.

Conclusion: The application works well and does what it says. There are some great basic features included with the regular app version, but upgrading to premium gets you many more useful features that enhance the application on many more levels. If you’re in a career or job where you have the need for covert security applications, MHC can easily help you get the job done.