Battery life is one major aspect of a phone or other mobile device that many of us are extremely concerned with, at least to the point where we try to choose the device that might give us the best possible battery life we can get. Sometimes we compromise and choose a device that has a mix of fairly decent battery life and high end specs, although usually going with some more high end specs can have a negative effect on your battery life. Not always however, and that seems to be the case with the latest flagship from Sony, the Xperia Z3 according to these findings  during a battery life test of multiple devices.

While battery life may not matter to everyone, especially those that will have the opportunity to keep their devices plugged in a good majority of the day or carry a battery pack around with them, to a large number of users, myself included, being tethered to a charger or having to lug around a battery pack on a daily basis is just not something that is optimal. In the case of which device provides the utmost in battery life throughout an entire day, the Xperia Z3 appears to come out on top. Results like this will vary of course, because how every person uses their device is different from the next, on average though, you can expect phenomenal battery life from the Xperia Z3 it seems, which just adds one more awesome thing to an already great looking phone.

Thanks to this battery benchmark test from Phone Arena, who says the Xperia Z3 was put through its paces during this rigorous test, we can see that the Xperia Z3 was able to last almost nine and a half hours with the screen on, coming in ahead of the Huawei Ascend Mate 7, the Xperia Z2, and the Galaxy S5. These results can apparently be attributed to Sony’s choice of screen type, and other Sony devices appear to be just as good as Phone Arena points out that several of Sony’s phones are ranked extremely high for battery life compared to devices from other OEM’s in their class. Although the Xperia Z3 may not be available to most people here in the states as so far only one carrier has officially confirmed to sell it, if you can grab a hold of one for your daily driver you shouldn’t be disappointed in the battery life department. 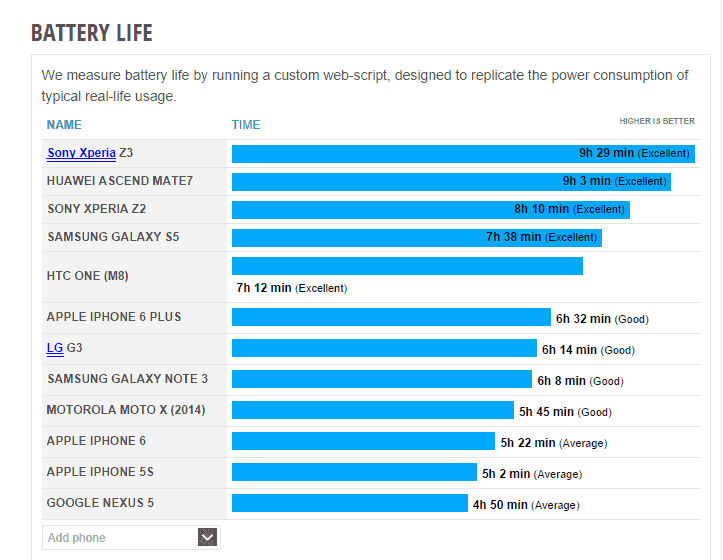