Sony took the wraps off their brand new flagship this morning at the IFA conference, as expected, and to no surprise there wasn’t a huge change in the scheme of design,(although Sony did round the frame edges out a little bit)it has some great new features and overall has a high powered and well rounded set of specifications. In short, it will definitely be able to hold its own against other flagships. We have a specs post already up of the full phone specifications for the Xperia Z3, so be sure to check that out if you want every detail. Here we’re going to focus on some comparisons with the Z3’s flagship competitors, the LG G3, The HTC One M8, and the Samsung Galaxy S5. The specs of the Sony Xperia Z3 are fairly similar to the other three devices, short of just a couple of things which you can see from the table below. It has the same screen resolution as the HTC One M8 and the Galaxy S5, but the G3 takes the cake here with the Quad HD display and a 2560 x 1440 resolution. With that said, the Xperia Z3 is no slouch in the specs department, that isn’t to say that there aren’t a couple of things we’d change, like the Snapdragon 80 CPU instead of the 801.

The Xperia Z3 features a 5.2-inch TRILUMINOS LCD display that carries a 1920 x 1080 resolution, a Qualcomm Snapdragon 801 processor clocked at 2.5GHz, 3GB of RAM, and 16GB or 32GB of interal storage that is expandable via the microSD card slot up to 128GB. It’s running Android 4.4 Kit Kat out of the box which is also as to be expected at this stage, and of course we can see the same 20.7MP rear facing camera sensor as on past devices, although this time around the camera reaches ISOs of 12,800, and the lens is now 25mm wide. The video recording is still capable of up to 4K quality. On the front end we’re looking at a 2.2MP camera, so not as exciting as what’s on the back, but then again you won’t be using the front camera to take many pictures so it shouldn’t matter too much. The Sony Xperia Z3 is Sony’s first device that will be coming to the U.S. right around the time it’s available in other regions, although at this point it’s only been confirmed to be on T-Mobile’s network.

How many of you out there on T-Mobile are eyeballing this device for your next phone? Are you most enthralled with the rear camera quality that Sony is known for or are you like me and looking forward to the Remote Play feature with that awesome controller mount? As always Sony’s devices look sleek and the IP waterproof rating will come in handy here in the “It’s not always sunny in Oregon” weather we get. Check out the specs comparison post below, than sound off in the comments on whether or not this device makes the cut for you. Would you switch to T-Mobile for it? 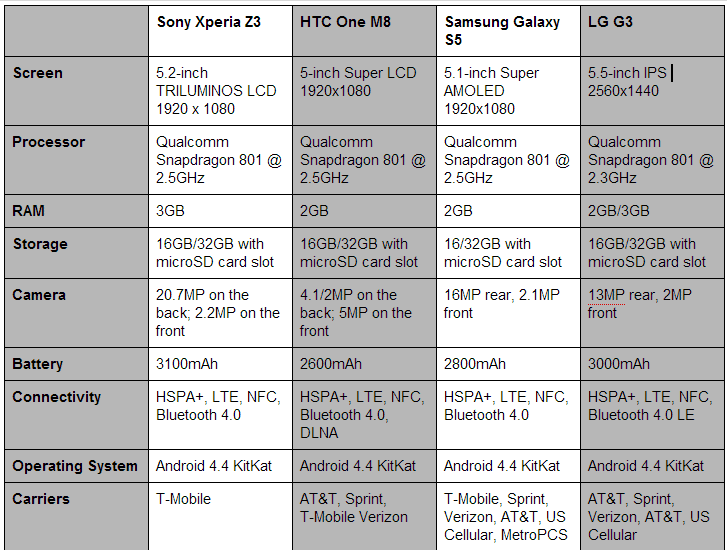