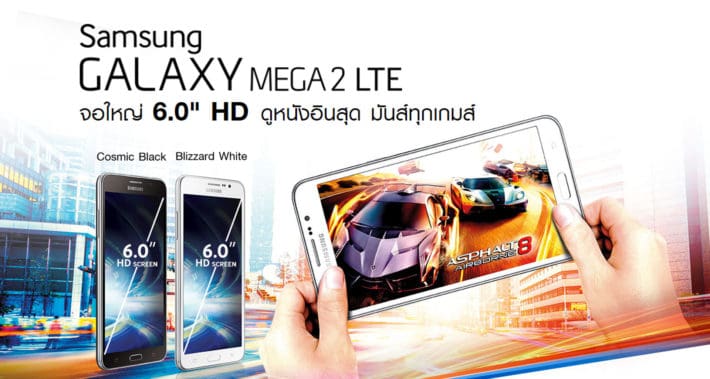 Samsung has finally listed it's follow up to the Galaxy Mega, the Galaxy Mega 2, on one of their official websites today. That means we now finally have official specs as well as photos of Samsung's Galaxy Mega 2. Lets dive right in shall we!

Samsung's Galaxy Mega 2 is the successor to last year's Galaxy Mega smartphones. Last year the Galaxy Mega came in two sizes, a 5.8-inch model and a 6.3-inch model, this year there will be only one model. The single model that is being released this year meets last year's two models in the middle when it comes to size, packing a 6-inch display. As much as we hate the word, the Galaxy Mega 2 is definitely in Phablet territory at 6-inches. That 6-inch display is 1280 x 720p, nothing too impressive but it will do for most regular users. As for the rest of the specs, the Galaxy Mega 2 has an 8MP rear-facing camera with an LED flash and a 2.1MP front-facing camera for all those selfies you will be taking. As for internals, the Galaxy Mega 2 has 16GB of expandable storage, 1.5GB of RAM, and a 1.5GHz processor that has yet to be named.

Some other important things to take note of pertaining to the Galaxy Mega 2 is that it indeed does have LTE capabilities and will be available in two colors, "Cosmic Black" and "Blizzard White". The Samsung website that the Galaxy Mega popped up on was a Thailand website so it will be going on sale there obviously, but other availability such as the United States is completely unknown at the moment.

If Samsung's Galaxy Mega 2 peaks your interest then be sure to stay tuned to Android Headlines as we will keep you posted on any new details that arise about the device. You can also have a look at the official listing of the device on the Thailand website here, be aware that you will have to use Google Translate to read it unless you happen to speak Thai that is.