This is another tough comparison – it always is when a Nexus smartphone is involved – but one that must be done so we can see how the venerable Google Nexus 5 stacks up against the new arrivals on the scene.  One of the latest, soon to be available, is the Sony Xperia Z3…a revamping, if you will, of the Xperia Z2 released just six or seven months earlier.

These two smartphones differ almost as much as day and night, although they have a few things in common that we can mention here.  The displays are almost the same size, with the Xperia Z3 taking the size category by a mere .205-inches, however, they are both Full HD with a resolution of 1920 x 1080 pixels and the both employ the IPS LCD display technology.  Because of their size, the pixels-per-inch (PPI) are very close – 424 PPI for the Z3 versus 445 PPI for the Nexus 5.

Other areas include the built-in storage offered of either 16GB or 32GB, however the Xperia Z3 does offer an expansion option and the Nexus 5 does not…Google would rather have you do your data storage in the cloud and leave the device’s internal storage for apps and processing.  The Xperia is the larger device by almost one-half of an inch, but is very close in width.  The Z3 comes in at 7.3mm versus the Nexus 5’s 8.59mm in thickness and the Xperia Z3 weighs in at 152 grams versus 130 grams for the Nexus 5.  Both devices have Wi-Fi, Bluetooth 4.0, NFC capabilities and both are running Android 4.4.4 KitKat, although the Z3 runs their Xperia UI over top of the pure Android of the Nexus 5.

Please take a look at the detailed specifications below and then we will look more at each individual device in order to pick a winner to this comparison. 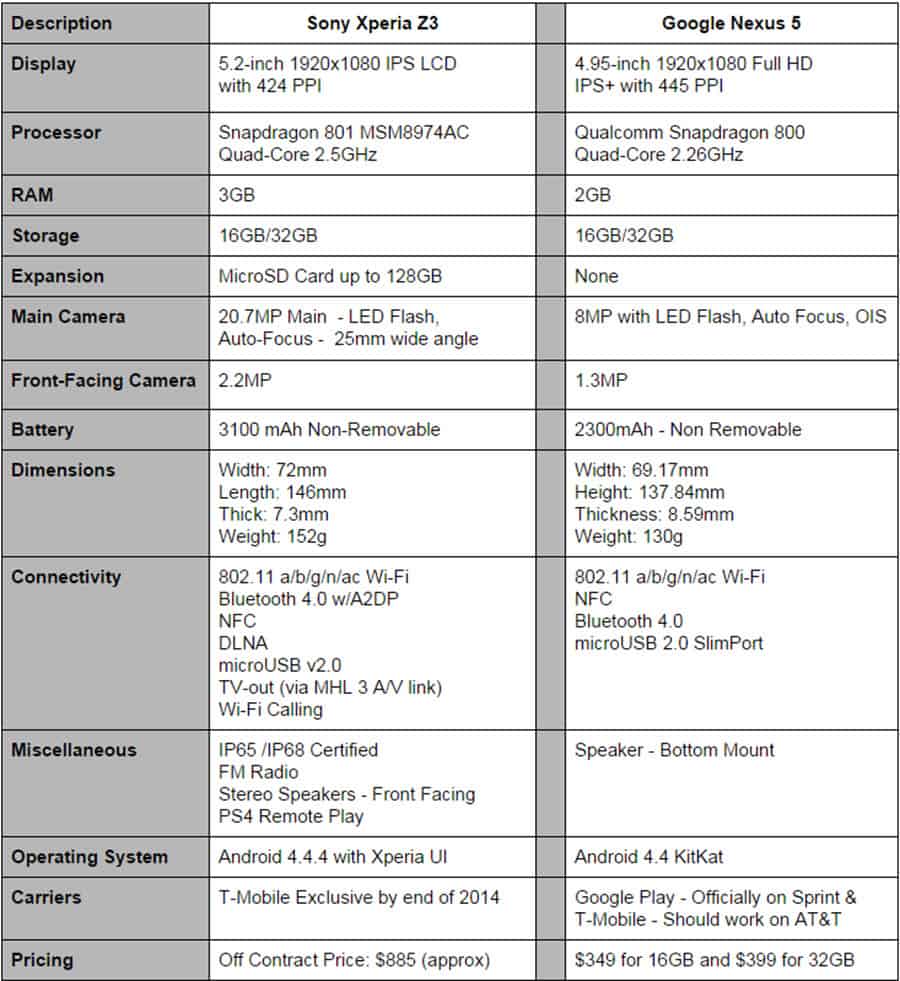 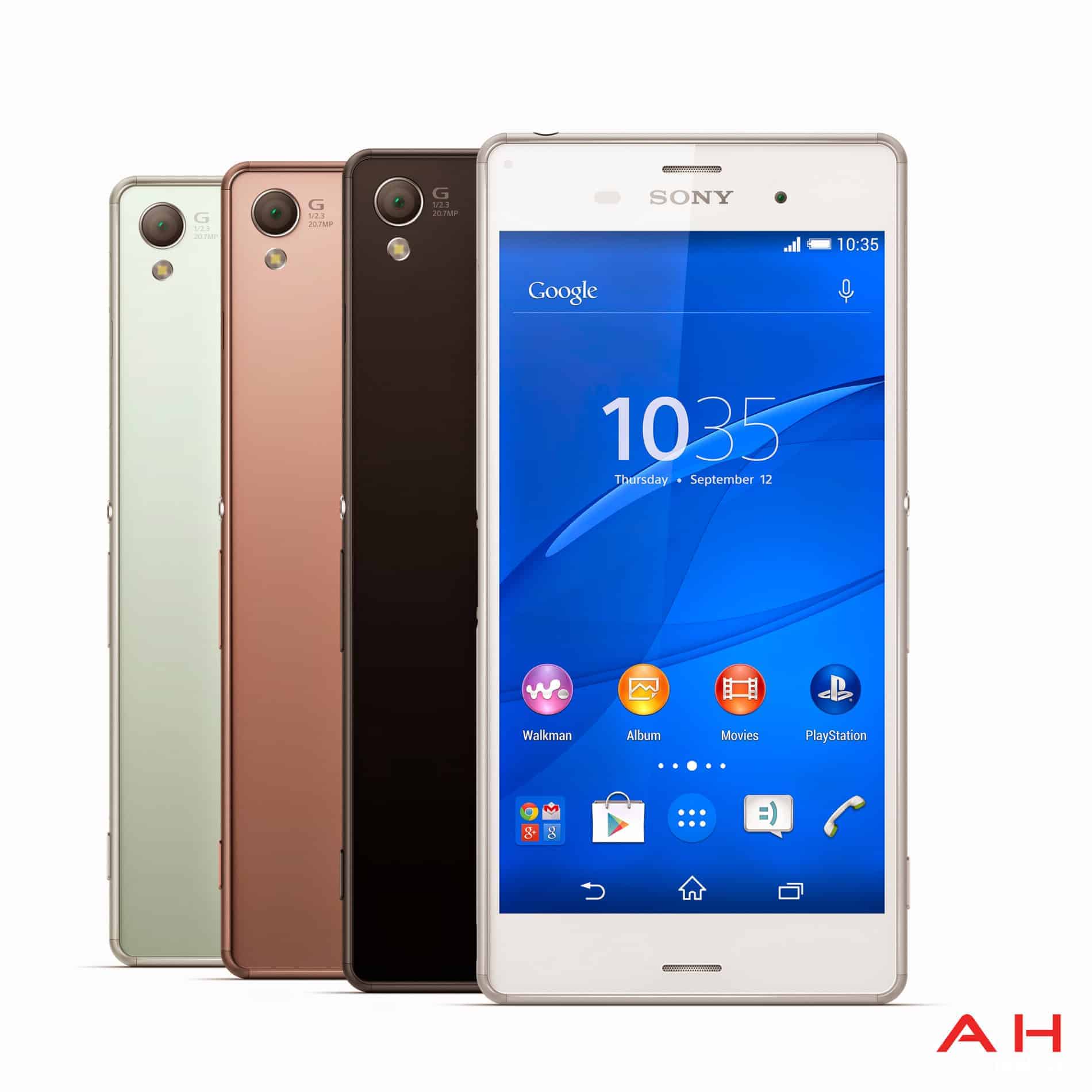 Sony did a quick turnaround from the Xperia Z2 to the Z3 in only six months – they needed an upgrade to combat the new HTC One M8, LG G3 and the Samsung Galaxy S5 – the only problem is, the Xperia Z3 still will not be in our U.S. hands until later this year, exclusively on T-Mobile.  The Xperia Z2 never did make it to the States and Sony wanted a flagship to do battle for them…hence the Xperia Z3.  It is a beautiful, sexy device – made with a metal frame and a glass display and back…and has always been held up to the quality of an iPhone…which I guess is high praise in their eyes!

We have already discussed the fact that the displays on these two devices are nearly identical as far as specifications and size go. The Z3 uses the upgraded Snapdragon 801 clocked at 2.5GHz which is a slightly better chipset than the Nexus 5.  The Z3 also has 3GB of RAM versus the 2GB in the Nexus 5, as well as offering a microSD card slot to add up to an additional 128GB of storage.

The main camera on the Z3 is Sony’s own 20.7MP with a 25mm wide-angle lens that allows you to capture more in the photo – more background or more images.  It easily beats out the 8MP on the Nexus 5, as does the 2.2MP front-facing camera (FFC) for video chatting and taking selfies.

The Z3 offers a larger 3100mAh battery over the 2300mAh of the Nexus 5, as well a DLNA option, TV-out connector, Wi-Fi calling capability, FM radio, stereo front-facing speakers and the ability to become a PS4 Remote Player with a separately purchased adapter.  One other feature is that the Z3 is IP65/IP68 certified for dust and water resistance – you can take pictures and even film video under the water.

It will run the newest Android 4.4.4 KitKat out of the box and be a T-Mobile exclusive – severely limiting its outreach, which is unfortunate…and while no prices have been released, it will most likely approach $900 off-contract. 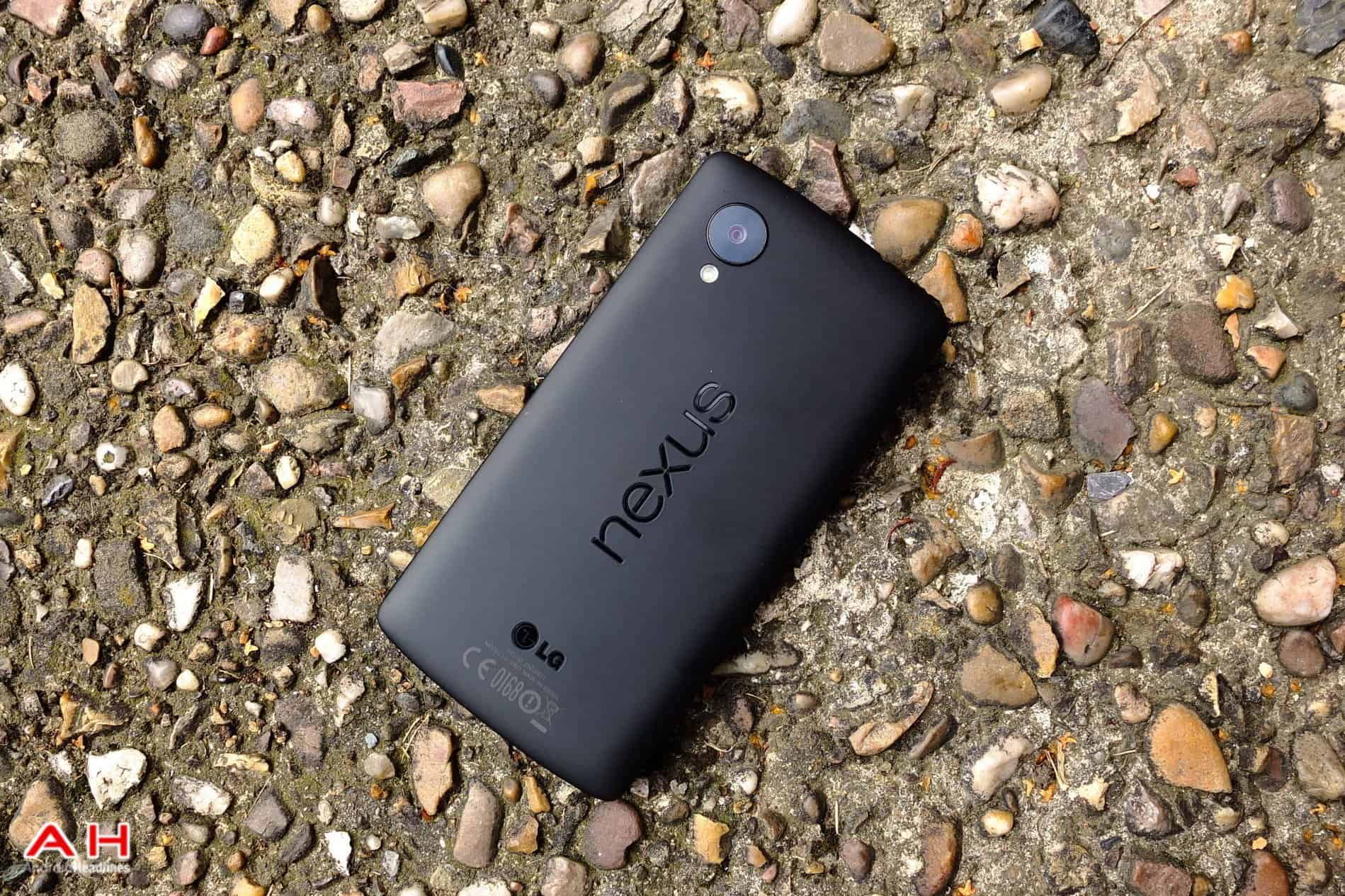 The latest Nexus 5 was built by LG to Google’s specifications, and just as LG has taken a leap in the quality of their devices…that carries over to the latest Nexus 5.  The Nexus smartphone was never about being a truly high-end, flagship type device – it was all about value and a way to showcase the pure Android experience for all to enjoy.  However, the Nexus 5 is the closest one to come to a high-end device – and yet Google was still able to keep it quite affordable. Where they ‘cut-corners’ is in the material design, camera area and the battery…a minimalistic design of plastic, though quite nice looking with a good feel.

The screen size was upped to a 5-inch Full HD IPS LCD, but nothing that bests the Z3.  The Snapdragon 800, while a great processor, is still upstaged by the Z3’s new Snapdragon 801, especially when it comes to the GPU paired with it.  The 2GB of RAM, which runs the Nexus 5 and pure Android just fine, is still less than the 3GB in the Z3.

The camera, always a weak-link of the Nexus line, improved greatly this time around with an 8MP shooter with OIS, however, the pictures cannot compare to the 20.7MP shooter in the Z3.  The 1.3MP FFC suffers as well when compared to the 2.2MP of the Z3.  The battery, another Nexus problem, continues with only a 2300mAh battery compared to the 3100mAh of the Z3.  The Nexus 5 has wisely placed the speaker on the bottom of the device – a good place when used as a speakerphone.

The price is right – $349 for 16GB and $399 for 32GB, off contract – unfortunately, Google and Verizon cannot work out their differences so it is officially only available on T-Mobile and Sprint, although it should work on AT&T.  A Google device should be available to use on ALL carriers…just saying.  One of the best things about the Nexus line of products is their immediate upgrade when a new version of Android is released. 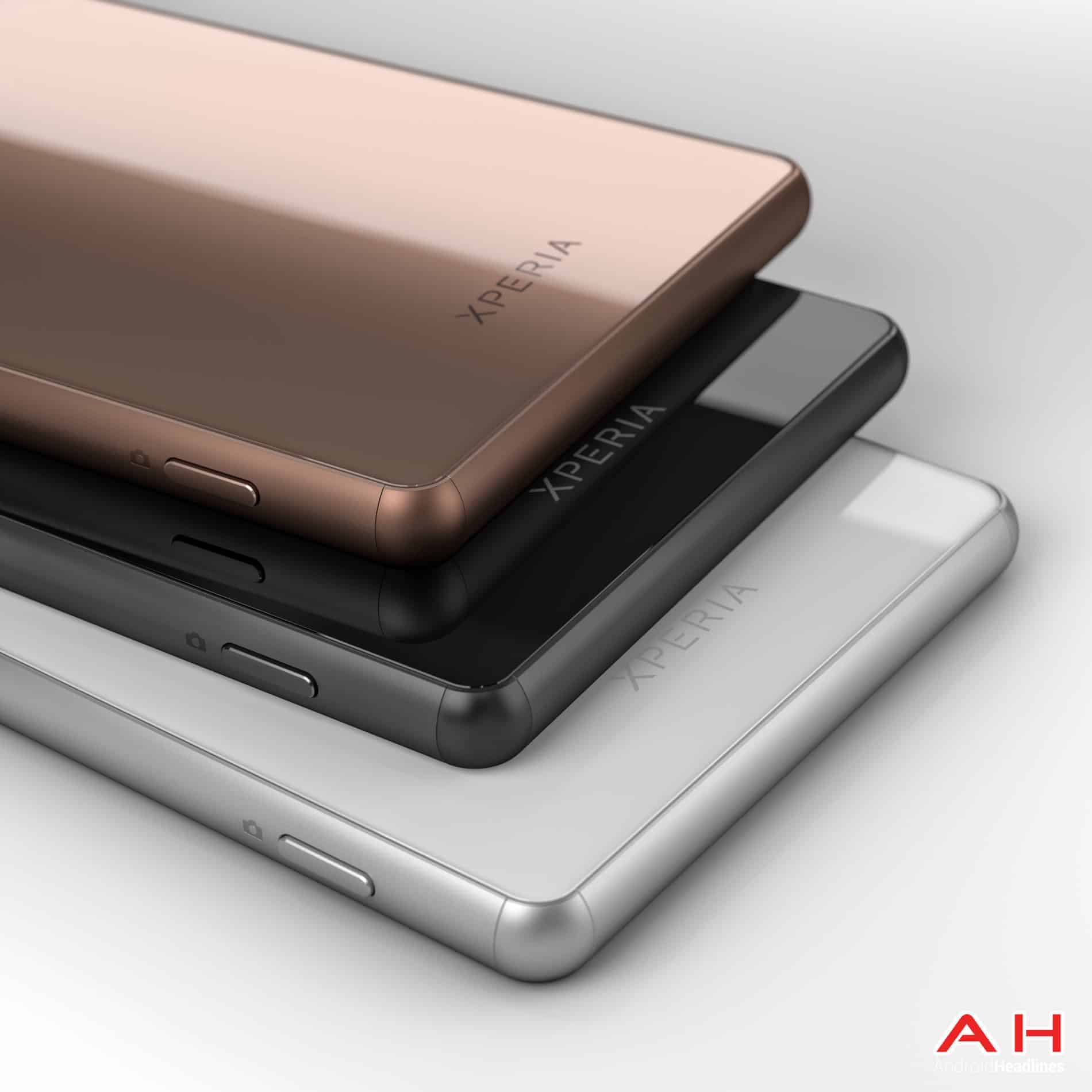 As much I would like to give the nod to the pure Android experience of the Nexus 5 and its reasonable pricing, I am afraid it must go to the newer Sony Xperia Z3.  There are some similarities – the display being the most important – but the differences in design, specs and features tilt the win to the Xperia Z3.  The Nexus 5, though thoroughly satisfying in it minimalistic approach, gives way to the sexy look of the glass, metal and colors available on the Z3…but it must be said that over a long period of time, the Nexus 5 is more comfortable to hold.

The Z3 has a better processor, internal memory expansion, much better cameras, it also offers Wi-Fi calling, is IP65/IP68 certified against dust and water, enjoys front mounted stereo speakers, an FM Radio, and the ability for PS4 users to use the Z3 as a Remote Play option.

The Z3 is limited to T-Mobile, but then the Nexus 5 is officially available only on T-Mobile and Sprint (a damn shame – it should be on ALL carriers).  The Nexus 5 certainly has it beat in the off-contract price, and is a real bargain, but that cannot overcome the Xperia Z3 as a whole, which I am crowning as the winner in this comparison.  Please hook up with us on our Google+ Page and let us know which one of these devices you would choose as the winner and WHY…as always, we would love to hear from you.