The day is finally here, and the new and improved Samsung Galaxy Note 4 has arrived to take its rightful place in the successful Note line of Smartphones, or Phablets – the category that Samsung single handedly created and has refined each year since they introduced the original Note in 2011. The Galaxy Note 2 and Note 3 were undeniably successful and it looks like the Galaxy Note 4 will carry on that tradition, especially because of the two year contract cycle as there will be many Galaxy Note 2 users ready for their upgrade and the jump from the Note 2 to the Note 4 is a huge leap in performance and features. There was a lot of speculation this year about the design of the Galaxy Note 4, especially after many users and critics were disappointed in the Galaxy S5 this year.  Many were expecting a big design overhaul and that is not the way Samsung operates – sometimes to their detriment, but the Galaxy S4 was such a success, Samsung was just did not willing to mess with a good thing.  The Galaxy Note 4 was thought to finally break the cycle and possibly give in to a new design change, but alas, it is once again simply a refinement. Although no design ‘sound barriers’ were broken, it looks like we finally got the metal frame and a redesigned backing, but keeping the basics that made the Note 3 so successful.  Will it be enough to sway people to buy the new Galaxy Note 4…only time will tell, but I think Samsung is headed in the right direction…finally! Please take a look at the specifications listed below and you can see for yourself what exactly has changed.  Then we will explore the individual devices and look at the pros and cons to make the final determination of whether the Galaxy Note 3 or Note 4 will win the comparison. 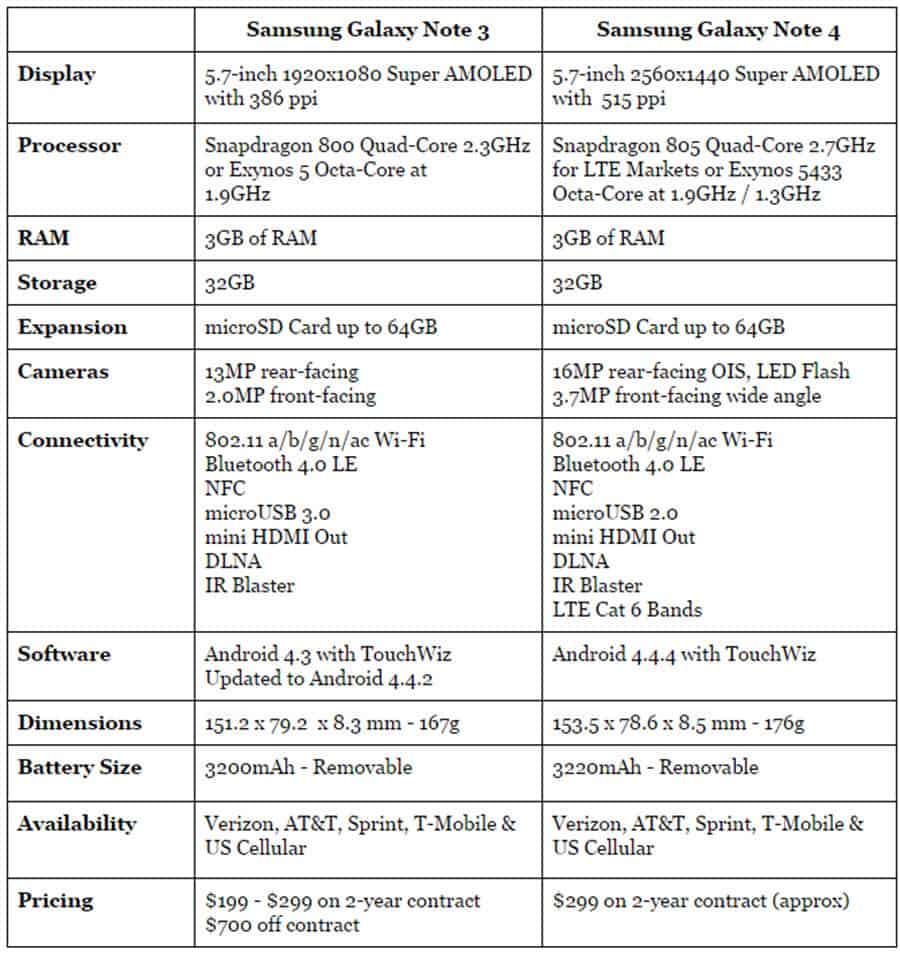 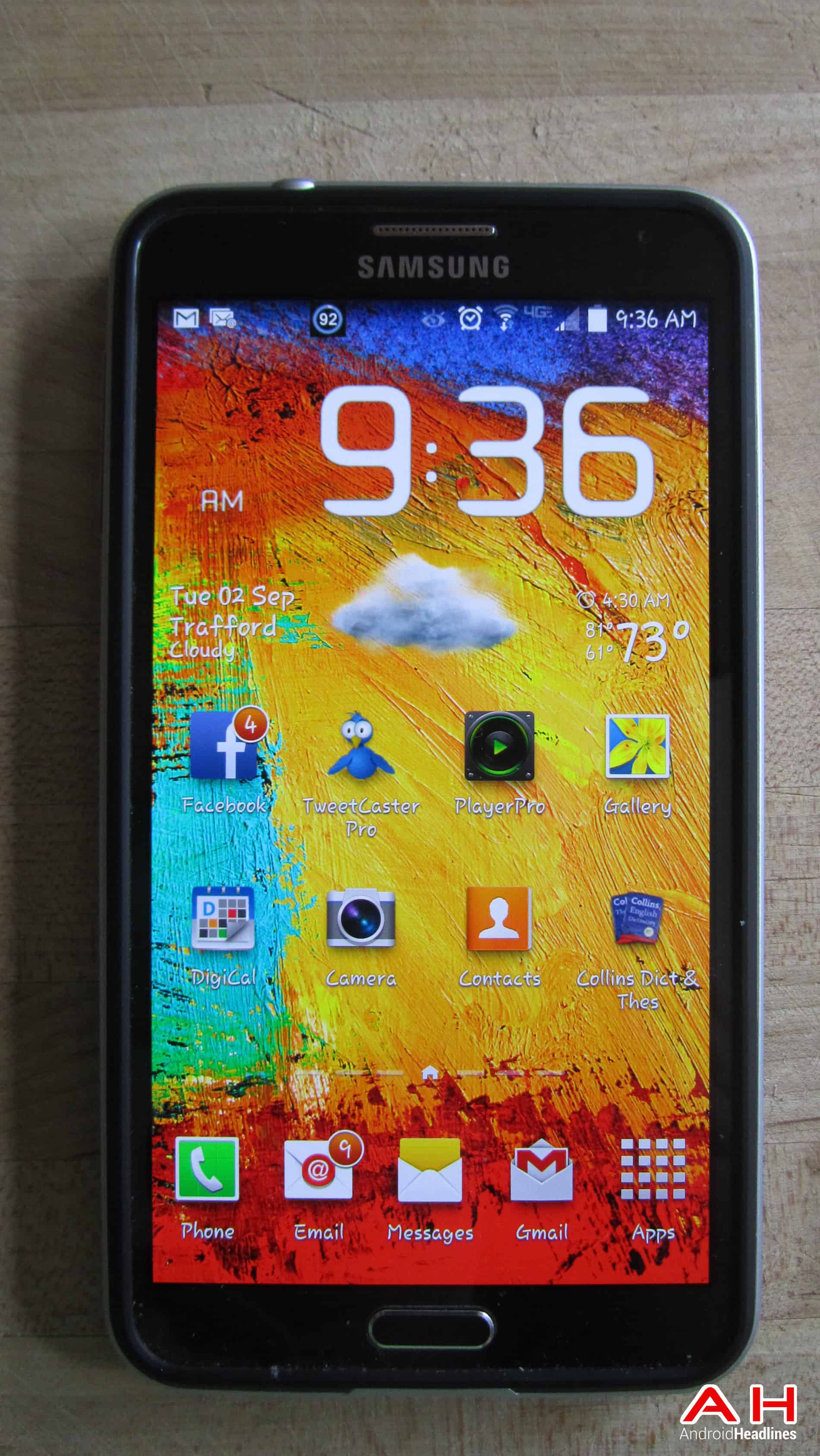 The Galaxy Note 3 came out last Fall and was an immediate success with its ‘chrome-like’ edging to its faux leather removable backing to its more squared off sides that made it look just a little more ‘manly.’  The 5.7-inch display jumped a tad from Note 2’s 5.5-inches and the screen resolution jumped to Full HD 1080p with 386 Pixels-Per-Inch (PPI).  The Note 3 is powered by the Snapdragon 800 quad-core processor clocked at 2.3GHz with 3GB of RAM and 32GB of internal storage – which is turning out to be the ‘sweet spot’ of storage for flagship devices…but the Note 3 did allow for another 64GB of storage via a microSD card. The main shooter is a 13MP delight, except for one glaring omission – there is no Optical Image Stabilization (OIS) built-in.  It has a decent 2MP Front-Facing Camera (FFC) built-in for video chatting and excellent selfies. A 3,200mAh battery powers the Galaxy Note 3 and depending on its usage you can get a full day out of the device – but it has to be recharged each night for heavy users.

It came with the latest Android 4.3 Jelly Bean and has been upgraded to 4.4 KitKat – running Samsung’s TouchWiz UI…another topic of debate among its critics.  Whether TouchWiz is your cup-of-tea or not, Samsung has way too much bloatware on their devices – most of which cannot be removed – if I do not plan on using a Gear Smartwatch with my Note 3, then I should be able to remove it. The Note 3’s S-Pen software was upgraded to include Air Command, a quick and easy way to bring up the most used S-Pen options. Two notable upgrades – the first was moving the speaker to the bottom edge of the device where it is no longer muffled, sounds louder and just makes more sense.  The second upgrade was to the MicroUSB v3.0 – much faster battery charging and data transfers. 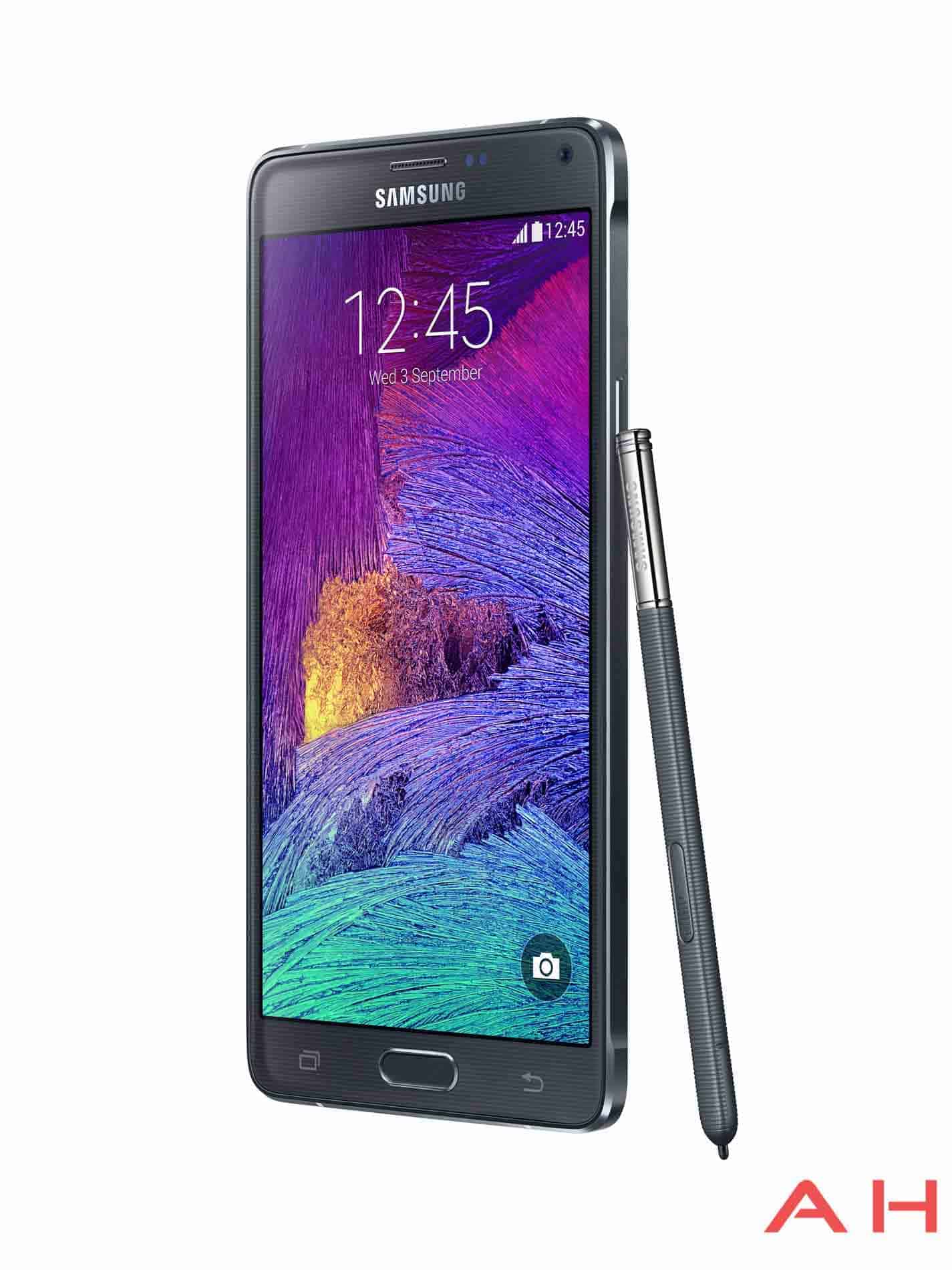 Now it’s time to look at the Samsung Galaxy Note 4 and see just how well it stacks up against its predecessor.  The real metal frame is a definite plus – the way it is sculptured at the edges and the way it feels in your hands will hopefully be awesome.  Samsung kept the same faux leather as on the Note 3, probably to differentiate between the Galaxy Note 4 and the Galaxy S5 – it just screams premium all over.  They also used a 2.5D Gorilla Glass that is slightly curved to help with viewing angles.   The display stayed the same 5.7-inch size, but moved up to the QHD resolution of 2560 x 1440 and 515 PPI.  The processor is the best you can get right now – the Qualcomm Snapdragon 805 clocked at 2.7GHz with the same amount – 3GB of RAM – as the Note 3.

One of the best upgrades is in the camera area – a 16MP (up from 13MP) that includes Optical Image Stabilization (OIS), autofocus and LED Flash.  On the other side we have a huge upgrade from 2MP to a 3.7MP FFC that has a wide angle (120 degree) option to take a panoramic selfie to fit in large groups.

Samsung also added three new microphones that will allow better conference calling and better noise cancellation, especially using the speakerphone.  Speaking of the speaker – in a move I find regressive, they moved the speaker from the bottom to the back of the device…and while we are on the subject, Samsung also regressed by removing the microUSB v3.0 and going back to v2.0.  With the large files that the Note is designed to use, data transfers are taking a huge step backwards.  My final pet peeve – they left the microSD card slot at 64GB rather than giving it the 128GB like the Galaxy S5 and LG G3.

There were improvements in the S-Pen area as well – more software options and touch sensitivity to give you even a better experience and a great S-Note widget for on the home screen. The Galaxy Note 4 adds a fingerprint scanner, heart rate sensor and UV reader. The battery was only increased from 3,200mAh to 3,220mAh, although Samsung claims a 7.5-percent decrease in battery consumption as well as a quick charge feature that will charge a dead battery up to 50-percent in only 30 minutes. To sum it up, there have been incremental improvements in almost every area – a big improvement, specwise, in the screen resolution – but is it worth the upgrade and does it have enough to beat out the Galaxy Note 3? 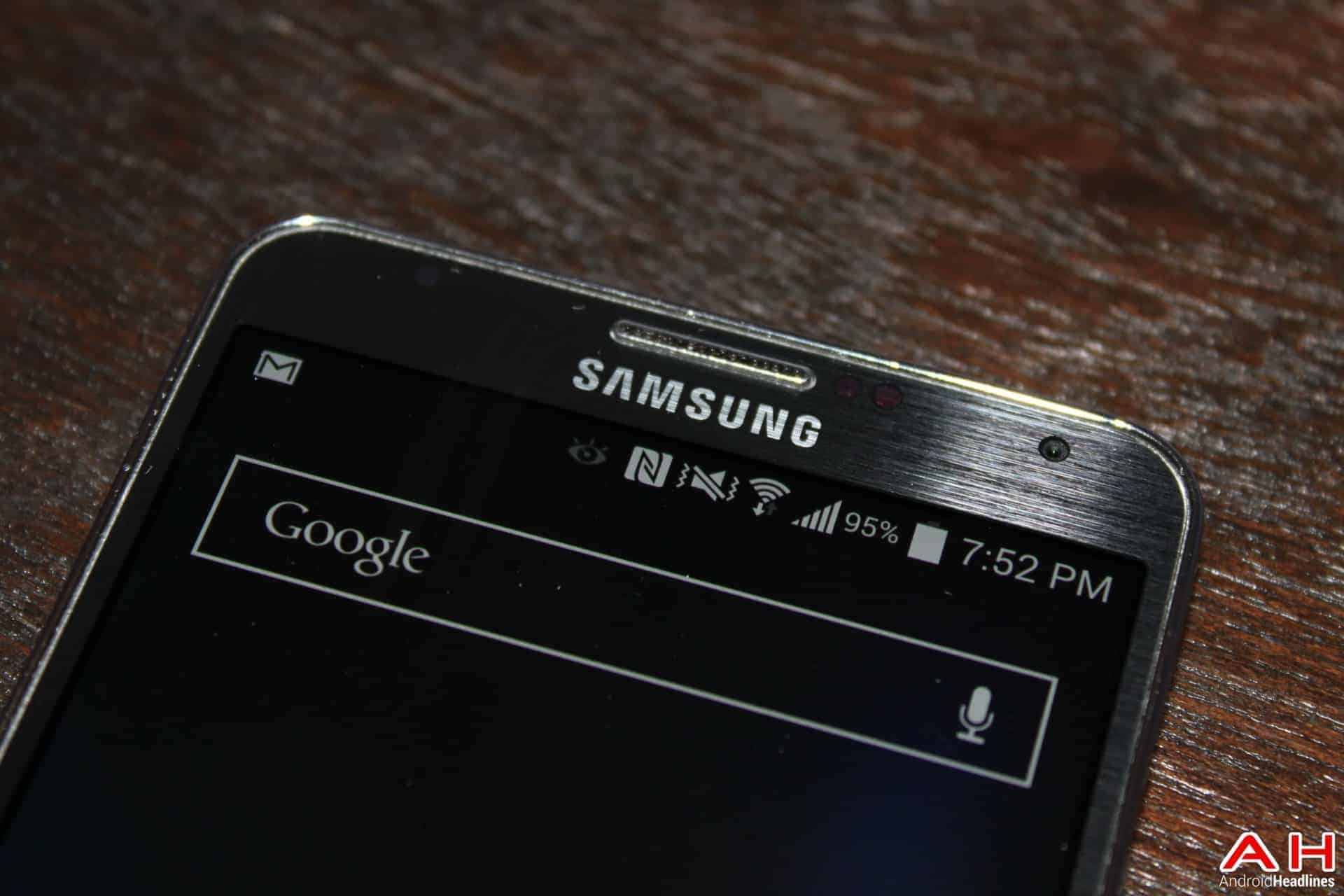 I am calling this one a draw – I only put the Galaxy Note 3 picture to prove a point. The new Note 4 is a terrific device, and if I had a Note 2, I would either upgrade to the Note 4, or purchase a cheap Note 3 and wait until 2015 and get the Note 5 or Note Edge. Sure the Note 4 has a better screen – but is it worth twice the price of the Full HD on the Note 3? Sure, it has a newer processor – but it’s still not 64-bit and unless you are a HEAVY gamer, then the Note 3 processor is still a screaming beast. Sure, the Note 4 has a fingerprint scanner, heart rate sensor and UV monitor – but are you even concerned about those three features?

I am a big fan of the Note series and the S-Pen and I am happy that they continue to make improvements in that area, both on the hardware and software side. The updated camera is a no brainer – the Note 4 is much better, but the Note 3 takes an awesome picture as well.

What I am saying is that the Galaxy Note 4 is a beast of a smartphone or Phablet, but with the decrease in pricing on the Note 3, I just cannot justify the extra money of the Note 4. From a strictly specification standpoint, the Note 4 would win, but from a practical standpoint, is it worth it over the Note 3?  Only you can decide if you stand on the side with the specs or are more practical. Please jump on our Google+ Page and let us know what you think about the new Galaxy Note 4 – is it everything you were hoping for or are you just a bit disappointed…as always, we would love to hear from you.