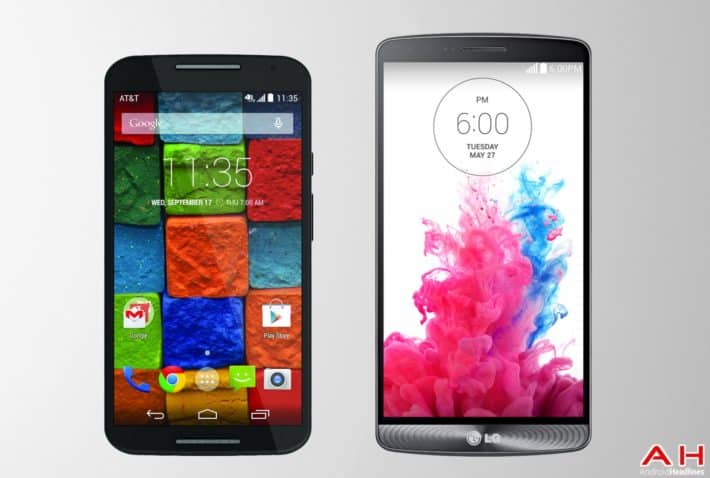 This will be an interesting comparison of the new LG G3 powerhouse up against the newest flagship from Motorola, the new Moto X.  Can the new Moto X stand up to the sexy G3 with its curved sides, metallic looking back and that beautiful 5.5-inch QHD display showing off its 538 Pixels-Per-Inch (PPI)?  It looks like the answer may be a resounding, Yes!  Both devices share the exact same processor, 16GB or 32GB of storage, 2GB of RAM (G3 will give you 3GB with 32GB of storage), both give you a 13MP main camera and a 2/2.1MP FFC and are close to the same size and weight.

The new Moto X is as sleek looking as they come – Motorola took the original Moto X and stretched a little in every direction and that curved back is as comfortable as ever to hold and available in wood or leather.  While they moved up to a Full HD display, not the QHD, they did add some great engineering on the new Moto X that should really benefit the user experience.

This will be a tougher decision that I first thought – one would think with the LG G3's QHD and new design with its metallic-looking back and sexy curved sides, it would be a slam dunk, especially against Motorola.  Take a look at the specifications in the chart below and compare the new Moto X and LG G3 side-by-side and then we will look at each individual device and use all of the information to make a selection for a winner in this comparison. 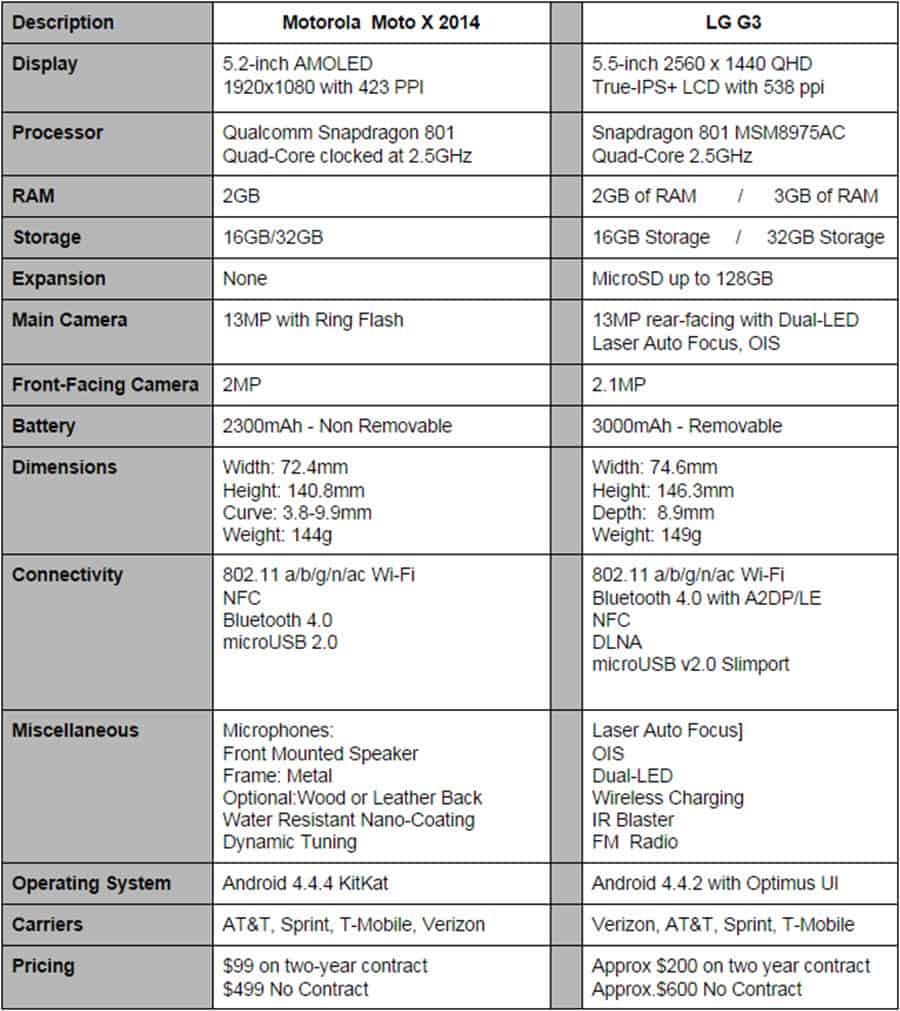 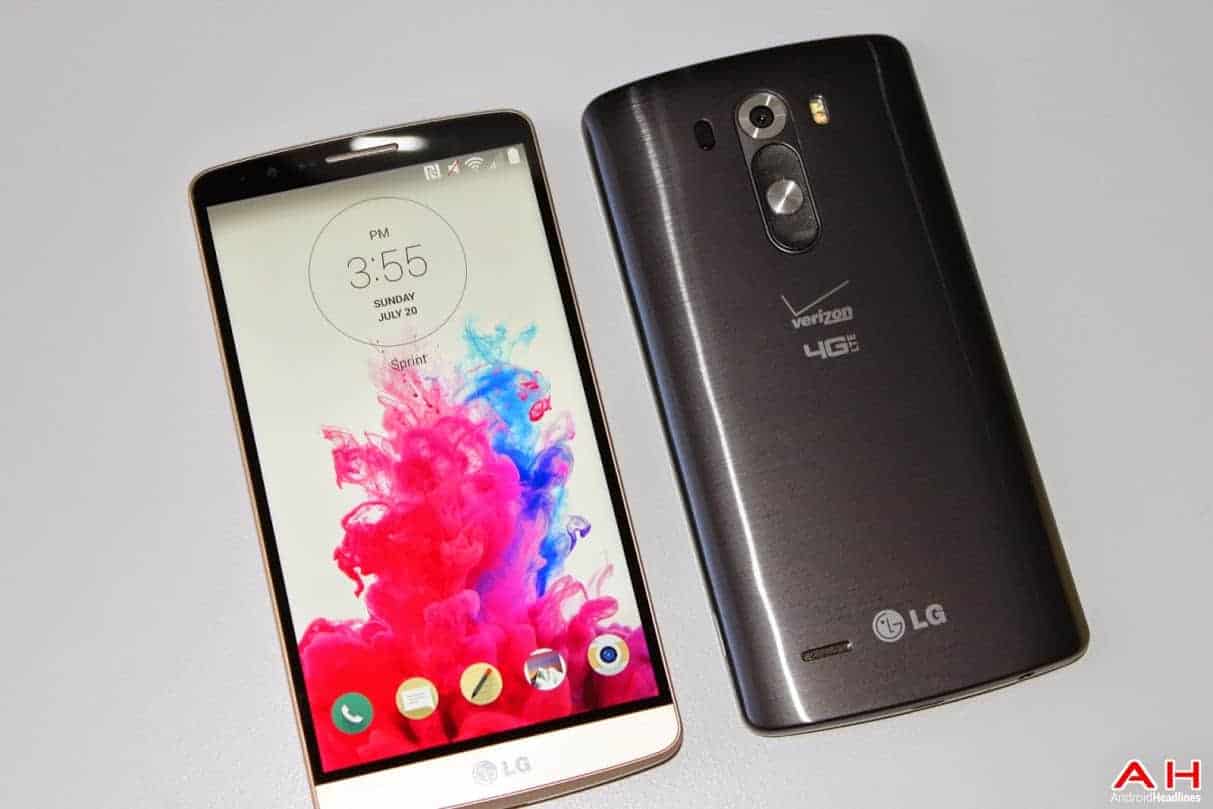 The LG G3 came out and hit the pavement running and gathered up some pretty nice accolades along the way.  The first thing you notice about it (if it's turn off) is the new look that can only be described as 'smooth and sexy' – the curved sides, the rounded back and the metallic-like look of the back make it one easy device to look at and just as easy to hold…if not a little slippery.

Once the 5.5-inch QHD display is up and running, that 2560 x 1440 resolution with 538 PPI really catches your eye – as long as the brightness is turned way up.  The Qualcomm Snapdragon 801 quad-core processor clocked at 2.5GHz with 3GB of RAM and 32GB of internal storage and available microSD storage is quite a matchup for the new Moto X.  Camera wise – the LG G3 shares a terrific 13MP main camera with the new Moto X, but adds OIS+, Dual-LED Flash and their new laser auto focus for quick and precise focusing.  The 3000mAh battery does an ample job of keeping you charged up all day.

LG did a good job with the G3 and made it better than the G2 – especially in the looks department and I applaud them for moving up to the QHD display…is it really necessary to have that many pixels, maybe not, but hopefully the pixel race will stop for a while and manufacturers will concentrate on other areas to improve. 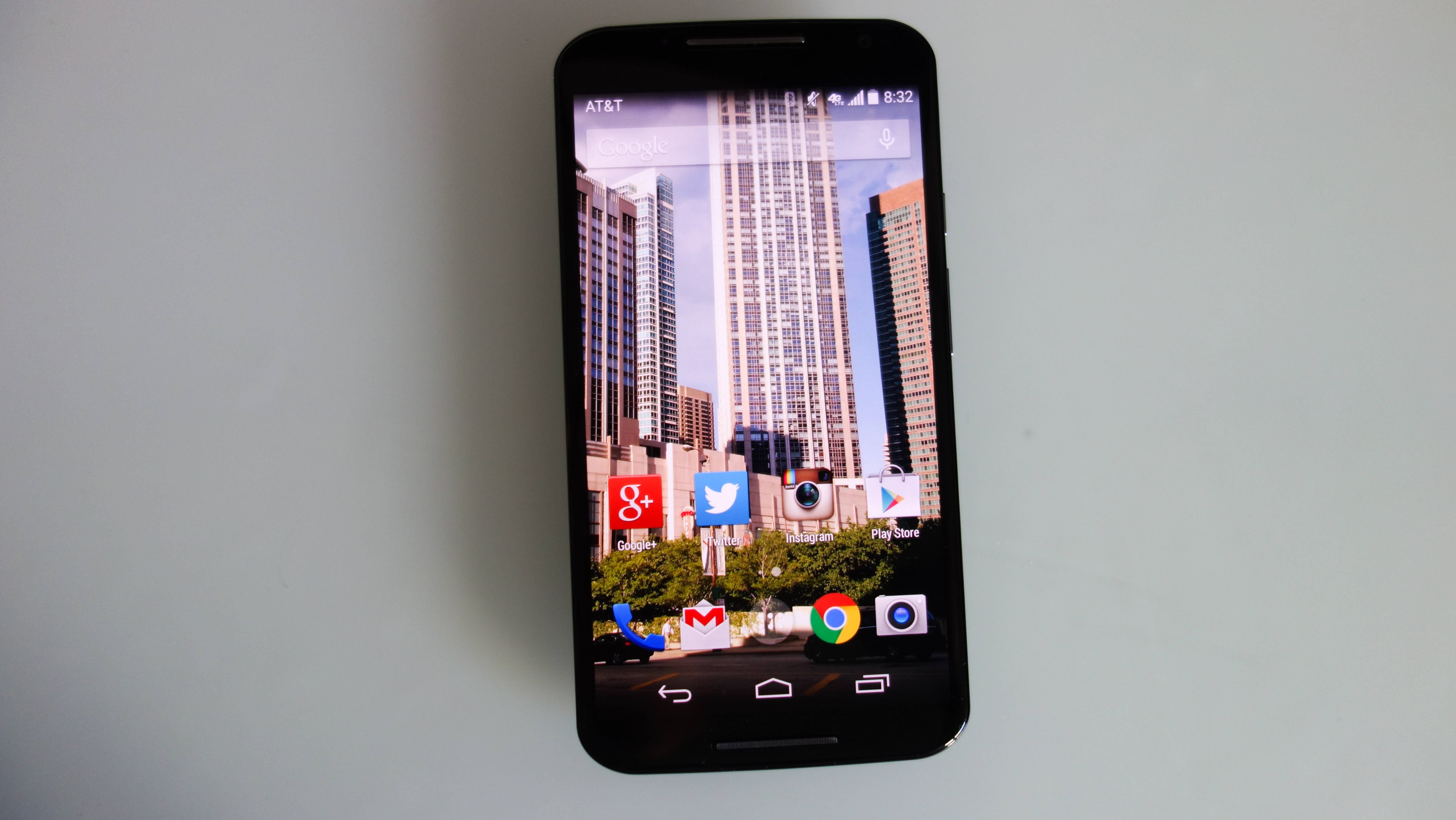 Motorola took a page out of the Nexus 7 book of naming – no Moto X+1, just 'new' Moto X or Moto X 2014 – I didn't like it then and I don't like it now, but thankfully, the name does nothing to sway our decision in the comparison.  As far as the new Moto X goes, Motorola did a great job in not only stretching the phone in every direction, but upgrading the device in every area and added new features that will really enhance the user experience.

They increased the display from a 4.7-inch HD display to a nice 5.2-inch Full HD display – certainly not a QHD display – but that 1080p AMOLED display is gorgeous.  It is also true there is no microSD card slot…I like having the SD internal storage, however, Motorola believes that you don't need a lot of internal memory – they favor using cloud storage.

Another area that Motorola needed to improve was the camera – Motorola is known for making great radios, not great cameras.  They increased the main camera from 10MP to 13MP and they included a 'ring LED flash' and from what Alex has indicated, the new camera seems to be snapping some good shots.  No, it does not have the Laser Auto Focus, but then nobody but LG does.  The battery is only a non-removable 2300mAh compared to the removable 3000mAh of the G3 – however, with Moto X's optimization and the G3's QHD display; the battery life will probably be about the same between the two devices. The Qualcomm chip has a Quick Charge technology that needs a special charger you must purchase separately for $30 (available soon) – they claim 15 minutes of charging will give you eight additional hours of battery life.

As far as specialty items go – Motorola is the first to add four microphones for optimum noise cancellation, the second is with the radio by adding Dynamic Tuning and the third item was adding a huge speaker on the front that sounds about as good or better than the HTC One M8 – these three items will really enhance the user experience on the new Moto X.  The off contract price of $499 and on a two-year contract price of $99 will also help enhance the user experience. 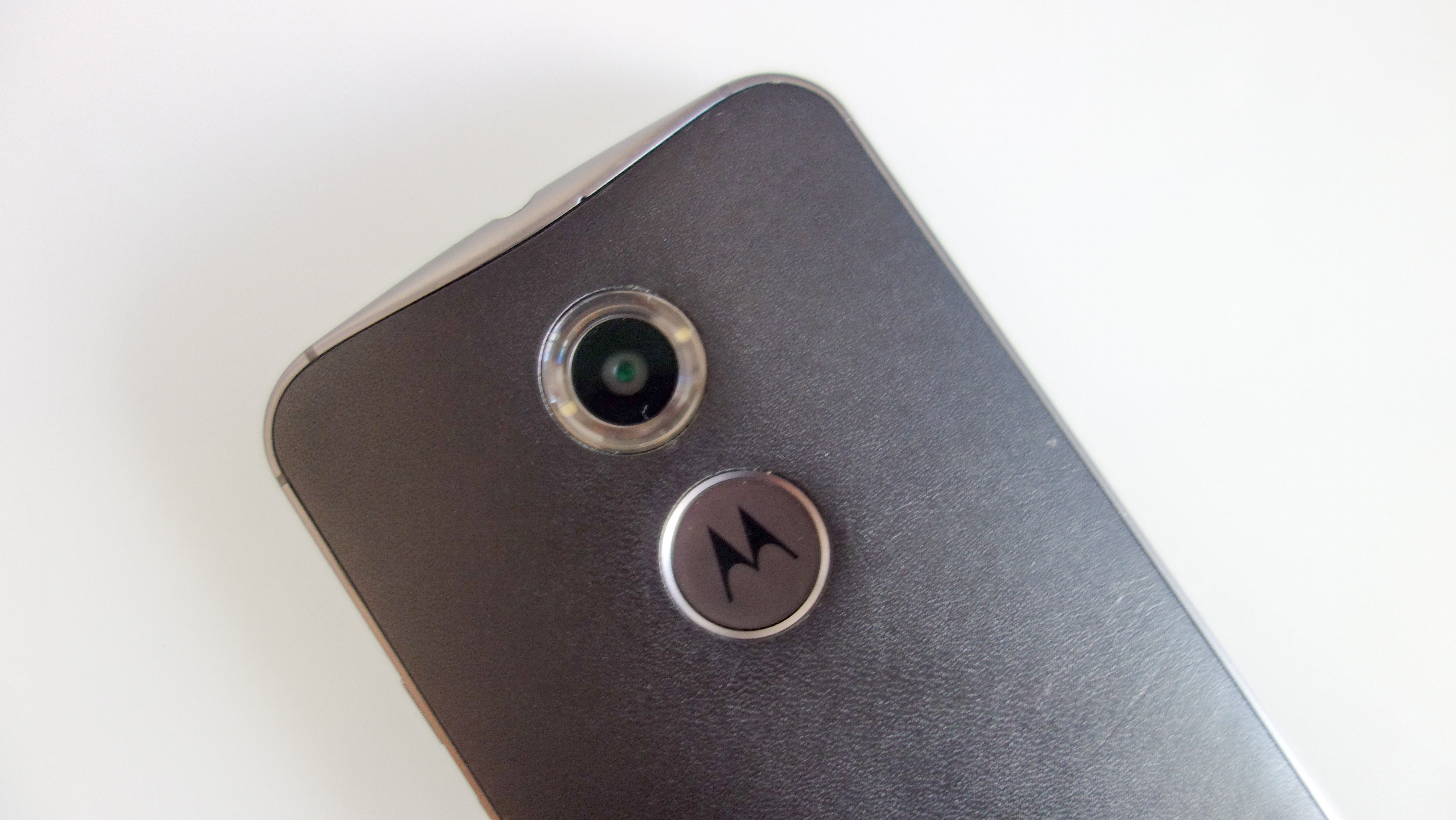 I have to give this one to the new Moto X over the LG G3…the G3 is a terrific device, but the new Moto X just has the certain, je ne sais quoi – with that curved aluminum frame, covered with wood or leather, beautiful Full HD AMOLED display, almost pure Android experience, large front speaker, 4 microphones, nano-coating for repelling water, Dynamic Tuning and Quick Charge capable…what is not to like. Sure, it does not have the QHD display or Laser Auto Focus that the G3 has, but those two features are not enough to give the G3 the win.

Motorola took a great phone and made it much better with a bigger Full HD display, much faster processor, greatly improved radio, front speaker, and much more.  For these reasons, I am giving this comparison to the new Moto X – I just think Motorola tried a little harder than LG this time around.

Please hook up with us on our Google+ Page and let us know what you think of these two devices – which one of these two great phones would you pick and why…as always, we would love to hear from you.