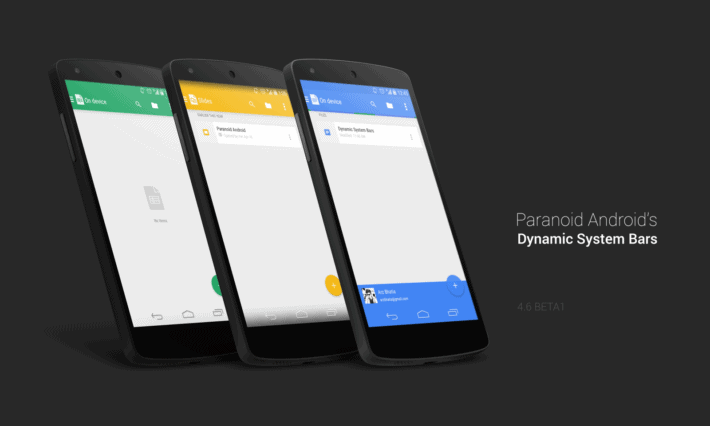 Just yesterday we wrote to you about the 4.5 Beta 4 release of the popular Paranoid Android ROM, which brought users some much needed bug fixes and improvements for things that weren't working quite right. Not too long before that Paranoid Android announced what they were bringing to us in an upcoming release, a new feature called Dynamic System Bars, which actually shifts and transitions your status bar up top to match the color of certain application elements. The entire team at PA definitely worked hard on this new beta and feature but extra credit deserves to go out to Valter Strods and Arz Bhatia for the Dynamic System Bars.

If you're a current PA user, then you already know about themes, and you may already be familiar with some of Arz's work in the theme section. One of his best and most popular themes, Veu, is a design inspiration for the way Dynamic System Bars looks and feels. The Veu theme takes design queues from Material Design, coloring the top bars of certain apps like Gmail for example, painting the entire bar in red. With Paranoid Android's recent release of 4.6 beta 1 complete with DSB, the status bars will transition to the same color as certain apps as you can see from the image above. This should certainly give your PA laden devices a bigger splash of color but PA points out that there are still some bugs here and there to look out for.

The team will be working to snuff out those issues as quickly as they can, in the meantime it might be advantageous to make sure you always have some way to charge up your device at any given time as the team mentions that at least one particular bug is related to battery life. So far the ROM build feels pretty solid in the short time I have been using it on my Nexus 4. Along with the DSB in this newest beta release, you'll also now be able to use a swipe up gesture to quickly get rid of/dismiss Hover(if you have Hover turned on)leaving you free to check the notification from the drag down panel at a later point of your convenience. That's everything for this latest build, load it up to your device if you want to preview the DSB before the next release which should fix the bugs. As always, Stay Paranoid!