With IFA first official day fast approaching and the expected launch of Samsung’s much-awaited Galaxy Note 4, OnePlus have thrown down the gauntlet actively pitting their flagship device, the OnePlus One against the Note 4. By now, if you even remotely follow tech news you would have probably heard about OnePlus and the One. If not then just to give you a very brief recap OnePlus is a Chinese start-up which a year ago was completely unknown. Since then they generated a massive buzz by announcing they would release the ‘Flagship Killer’, a device which was extremely high on specs, but low on cost. Eventually, after much talk and anticipation OnePlus launched the One and generally has received extremely good reviews. The device is of an excellent quality offering a 5.5-inch Full HD screen, Snapdragon 801 processor, 3GB RAM, 13MP rear camera, 5MP front shooter and available in both 16GB and 64GB internal memory variants. However, the company has attracted as much bad press as good with what many claimed to be a failed invite-to-buy system and not to mention the shameful Ladies Only contest launched (and abandoned within hours) recently.

So in short OnePlus are not scared of the big manufacturers and seem quite happy to court the odd controversy. With the launch of Samsung’s last flagship, the Galaxy S5, OnePlus again decided to pit their device against it claiming equally as good specs on a device which costs half as much. Today OnePlus have come back for more and looking to take on the mighty Note 4 by launching what they call the “Flagship Battle” and asking the very simple question “How can a start-up focus more on delivering user value than a multibillion-dollar company?”. There is no doubt the Note 4 is attracting attention and with its impending release the hype around the Note 4 is constantly building. In fairness, it does look to be a good device offering a 5.7-inch Quad HD screen (2560x1440p), 3GB RAM, 2.7 GHz Quad-Core Processor, 16MP rear camera, 3.7MP front camera, 32 GB internal memory with an additional SD slot accessible to a further 64GB. In an attempt to add humor to the ‘battle’ OnePlus have launched a ‘Flagship Battle Giveaway’ offering entrants the chance to win a 64GB Sandstone One. To enter the competition users must either a:Share and tag 3 friends in the comments or b: Comment and “plus” 3 friends on Google+ or c: retweet or reply to this message and mention 3 friends. The competition closes Thursday 1pm EST and winners will be notified by Friday 9AM EST. There is also a form you must fill out to enter the competition and can be obtained from the ‘Source’ link below.

So according to OnePlus the battle has begun! However, the Note 4 is a serious contender for the best device this year and this may be a big ask. Although when comparing the expected $900 price tag of the Note 4 compared to the $350 of the One there is an argument to be made. Either way what do you guys think? Who are you rooting for? OnePlus One or Galaxy Note 4? Who will win? Below is a quick comparison of the two devices (kindly provided by OnePlus) 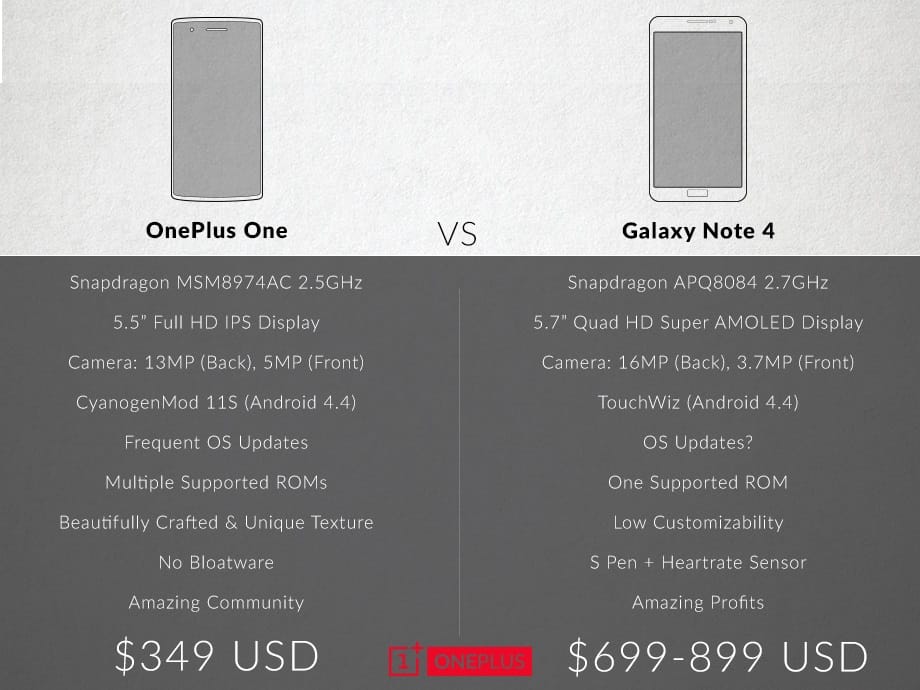