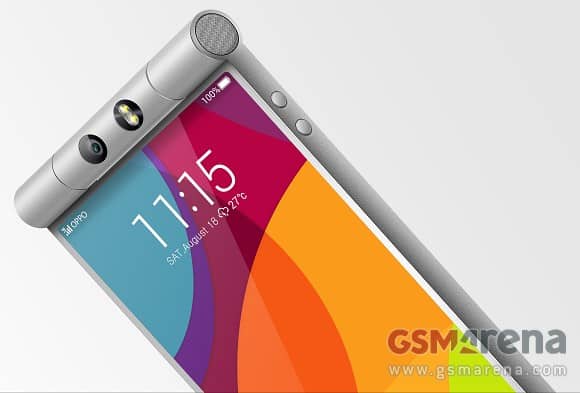 The Oppo N3 is on its way. The phone is starting to leak itself all over the internet. Earlier today we saw a leaked press render of the device showing off a rotating camera on the top. These leaks are probably controlled and coming from Oppo themselves, because they are coming fast and furious. We also have an inkling of a release date today, coming to us in the form of a promotional teaser. The Oppo N3 will be released, or at least announced, on October 15 in Singapore. The date has not been confirmed or officially announced, but we’re sure it won’t be long before Oppo drops an official line on the subject.

The N3 is the follow up to the Oppo N1 that launched in partnership with Cyanogen Inc. back in October of last year. We don’t have much in the way of specs or details about the N3 yet, except for the leaked press render from earlier this morning. The N1 had a rotating camera built into the top of the phone that made it easy to take forward and rear-facing shots with the same high quality 13-megapixel shooter built into the device. The leaked render of the N3 shows us a similar rotating camera concept, but the camera is embedded in a large tube on the top of the phone. It also looks like that strange protuberance has speakers in either end. I like the concept and the design of the N1, but I’m not a fan of the N3 design at all. Let’s hope that leaked render is fake.

Oppo has made some great phones, but most of them are not available in the US. The N1 had a beautiful 6-inch display to go with that 13-megapixel swivel camera, and the Find 7 had one of the first 2K displays on a smartphone. The N3 looks to be another radical shift for the company. We can assume that the specs on the N3 will be better than those on the N1, but the N3 is one ugly beast with that big tube stuck on top. What do you think?