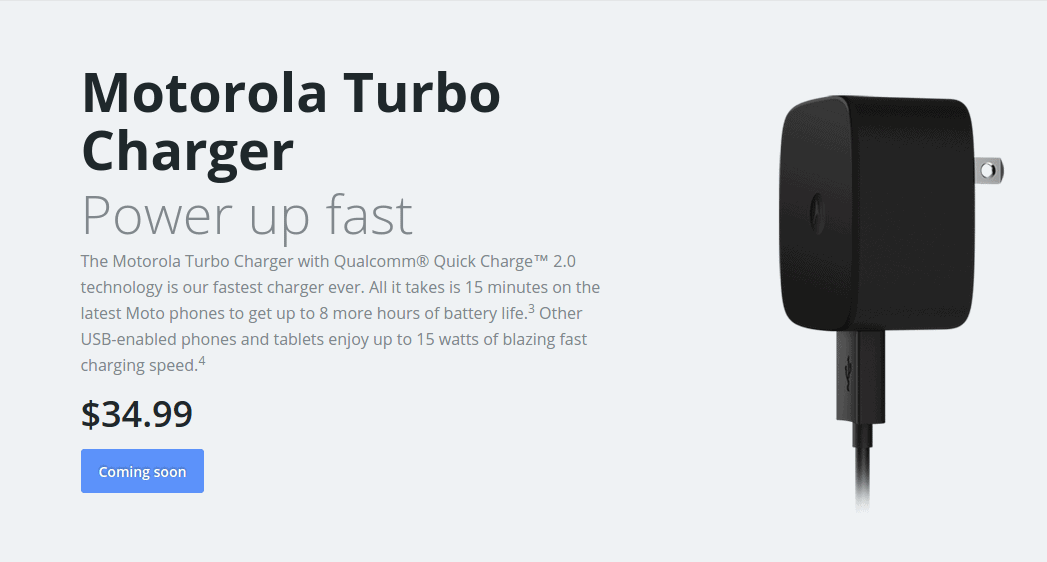 Yesterday, Motorola announced some pretty impressive new hardware, with the new Moto X and Moto G and of course, the final launch of the much-anticipated Moto 360. One of the main reasons Motorola has become so popular over the last couple of years is that unlike other manufacturers, Motorola things about the little things. These days we all live with technology, and living with a smartphone or a smartwatch is a whole different thing than "being the best". Thanks to a helping hand from Qualcomm, Motorola have managed to make it even easier than before to charge up the new Moto X.

The Turbo Charge from Motorola features Qualcomm's Quick Charge 2.0 technology which allows more juice to get to your phone without either damaging your battery or creating too much heat. Motorola are so confident about their new charger – which sadly costs an extra $35 – that they're promising 8 hours or so of battery life in your new Moto X from just 15 minutes of charging. Now, that 8 hours is probably a soft estimate on Motorola's part and it probably doesn't mean 8 hours of use at your normal pace. Still, if it can do that in just 15 minutes, imagine what it'll do in half an hour.

Samsung announced a similar addition to their Galaxy Note 4 this week at IFA 2014 in Berlin, and while we're still waiting for some revolutionary technology to make battery life better, things aren't as bad as they used to be. Processors have gotten more efficient and while Lithium Ion batteries haven't changed much over the past few years, it's easier and quicker to charge them. Plus, Android L promises a dramatic increase in battery life when it launches this Fall, so there's that to look forward to as well. With the new Moto X having just launched, what do you guys think to Motorola's new lineup?