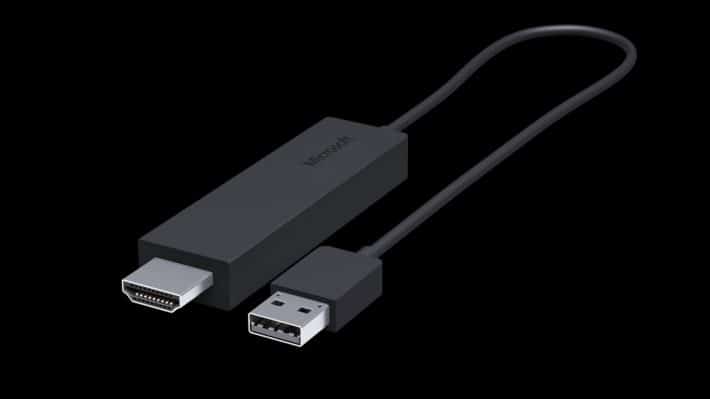 Microsoft does certainly seem to be changing their perspective on Windows. Only last week we reported Microsoft was releasing an all-in-one universal keyboard which allows you to connect up to three devices simultaneously. Although this was an excellent featured device what was most surprising was the Microsoft product was open to both Android devices (yes, and iOS) as well as Windows. It seemed as though Microsoft was making active steps to make their products more open to other operating systems. Could this be true? Well, it certainly looks that way. Today Microsoft announced the release of their wireless display adapter…and you guessed it, the device works on Windows, Android and iOS.

Now about the device. It is called the Microsoft Wireless Display Adapter although in reality they simply could have called this Microsoft Chromecast. To all purposes it is a direct alternative to Chromecast with some minor differences. The devices itself comes in a small HDMI dongle shape (similar to Chromecast) although its overall appearance is not as desirable as Google's version. The WDA (it's shorter than keep writing Wireless Display Adapter) is more box shaped and looks rather basic lacking the Chromecasts more modern shaping and form. However, one of the differences between the two devices is that the WDA comes with an attached USB lead. This is non-removable (which is disappointing) and may lead to issues. For instance, if the cable breaks then it is presumed you have to replace the entire device. In addition, the lead is minimal in terms of length which means you can only power the WDA from the device you are using. As a result of this if the USB and HDMI sockets are away from each other then you will need a USB extension lead. One feature which does seem quite good is the WDA will cast anything and everything on your screen. It works in the same way that Chromecast support does but unlike Chromecast doesn't rely on apps having the necessarily support in place. WDA will literally cast any content from your device to your big screen. This is done using the devices Miracast feature. However, the biggest issue noted with Microsoft's version is that you cannot multi-task. When your device is casting using the WDA you are stuck with what it is casting. You cannot use your device for other things at the same time.

The last main difference between WDA and Chromecast is the price. Microsoft may be directly trying to take on Google with the look and feel of the product however with a price tag of $59.95 they are certainly not trying to compete on price. Either way if you are interested then you can pre-order now from Microsoft or Best Buy. The device is expected to ship in October. So what do you think? Google's Chromecast or Microsoft's Wireless Display Adapter?