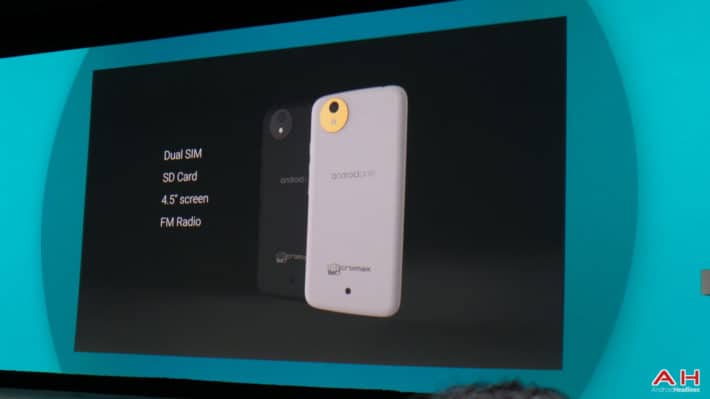 Karbonn and Spice have both teased their upcoming Android One smartphones today, Micromax had to join the party and do the same. Micromax teased its own Android One device with an obvious caption "CAN REFRESH with The smartest ONE". Google has already confirmed that this device will come with a 4.5-inch screen, FM radio, SD card support and Dual SIM functionality. The device will be exclusively available from Amazon.in. Karbonn's device will launch exclusively on Snapdeal and Spice's on Flipkart. All three of these devices will be available on September 15th when Google is holding its even in India. The teaser also mentions 3:30PM as the time the devices will available, 3:30PM local time (in India).

Android One is Google's project which they announced back at Google I/O in June. This basically means that Google will partner with manufacturers in order to deliver low priced phones, Google will handle the software in order to deliver timely updates while manufacturers are allowed to put their own applications in those phones. Google is aiming at sub-100% price, which is great for emerging markets though it seems these phones will suit many people actually. It remains to be seen how will the rest of hardware look like once the devices are released, but I'd bet the devices will be quite capable and will suit the majority of people. Considering the price this might be a great deal for many people. Hopefully these devices will spread out all over the world, in other words be available for purchase worldwide.

This event is only a couple of days away, Monday is the day, so stay tuned, we'll let you know everything you need to know as soon as we can. Do these devices seem appealing to you? Would you consider buying one of them if by any chance they reach your country or become available for purchase online for approximately $100? That seems rather appealing to me personally, I might consider getting one of those as my backup device or something, though I'm waiting to see the final product before I jump to conclusions.