Meizu has launched its new MX4 flagship a couple of days ago. There were rumors going around that Meizu will launch a bigger and more premium version of the handset as well at that very same event, though recently before it occurred we’ve got the report saying that it won’t happen. The report said that the launch is delayed, allegedly because Meizu wanted to differentiate when it comes to the design. The device in question is Meizu MX4 Pro and we’ve heard a lot about it in the recent weeks / months. We have some additional news for you now, straight from China.

It seems like CNBeta got ahold of Meizu MX4 Pro’s spec sheet. According to this report the device will sport a 5.4-inch screen, which is about the same as the Meizu MX, though it seems like this device will come with a QHD screen as it was rumored recently, 2502 x 1536 will be its resolution according to this leak. As for the processor, it seems the leaks were spot on, Samsung’s Exynos 5430 is expected to power this device instead of the MediaTek one which is included in the MX4. This device is expected to come with a whopping 4GB of RAM which is double the RAM included in the Meizu MX4. The last specification that is mentioned in this listing is the device’s front-facing camera, 13-megapixel sensor will reportedly be located at the front of the device. This seems quite out there and odd to be honest, 13-megapixel front-facing camera while other devices have that very same sensor size on the back… odd. Fingerprint sensor will allegedly also be a part of the package, though we’ve heard this rumors before.

What do you make out of all this? This spec sheet actually seems quite odd to me, 4GB of RAM and 13-megapixel front-facing shooter? I’m rather sceptical when it comes to this. It is of course possible the device will have the listed specs, but I doubt it. This would make a huge difference between their current (recently released) Meizu MX4 smartphone and the MX 4 Pro, Meizu MX4 would look like a mid-range device next to this thing. Some reports are saying Meizu will unleash this beast next month, so… we should know more then, stay tuned. 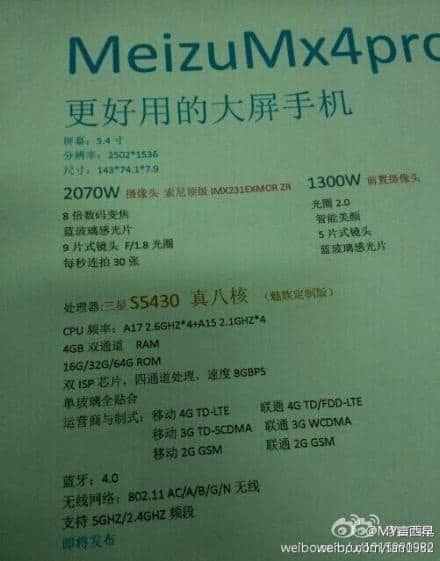