Skip to content
Trusted By Millions
Independent, Expert Android News You Can Trust, Since 2010
Publishing More Android Than Anyone Else
12
Today
12
This Week
102
This Month
8276
This Year
125759
All Time

Today we reported on an interesting video which popped up on HTC’s YouTube channel which seemed to be advertising a new rumoured HTC camera accessory. Before today all we knew about the supposed camera was what came from a tweet two weeks ago. The tweet hinted at the camera and the fact that it might be a rival to GoPro. This led to speculation that the camera accessory was something designed for the more adventurous, maybe a wearable camera. Today’s video certainly went some way to confirm that this is some sort of wearable camera which can record users on-the-go and even underwater.

It’s only been a few hours since the original report and the video and now we have some very interesting developments. An eagle-eyed Reddit user spotted some very strange images. At the time of our original report a website dedicated to the launch of the device was not live. Since then and according to the reddit post, the redditer was on the site when it launched and managed to snag the two images before the site went back offline again. So there you go, folks. It is confirmed, HTC will be launching a camera on October 8th. However, I don’t think anyone could have pictured (sorry for the pun) how the camera will look. It certainly is an attachment but almost looks like a mini-periscope. This would certainly explain why the video from this morning was touting underwater use. This camera looks like it could navigate itself underwater. In addition, you can see in the images that this is not only designed as an attachment piece but will be pushed by HTC as a device you can take selfies with. As this is believed to come with a 16MP sensor and obviously comes with a wide lens the selfies should be pretty good.

So there you go. The mystery is (somewhat) over. Not only do we know HTC will launch a camera accessory but we now do know what it looks like…a periscope. Thanks again reddit user fod awim. Excellent work on snagging those images. 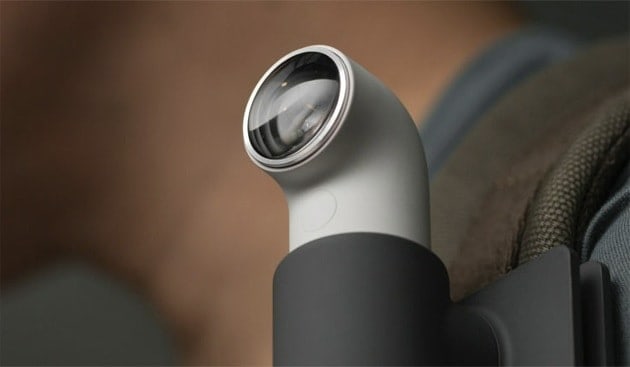