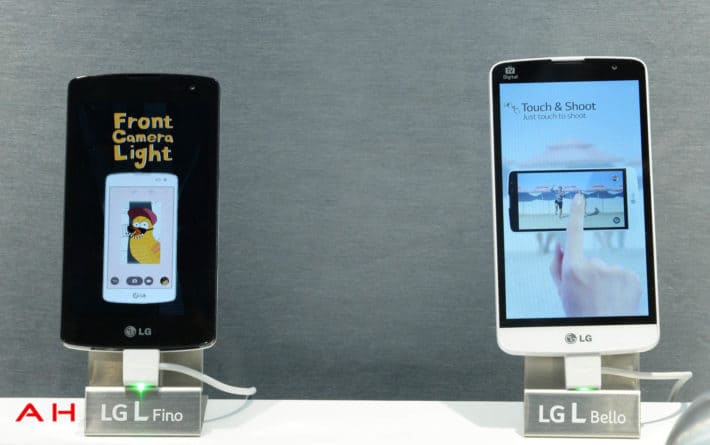 While LG has become known for cramming the absolute best specs and hardware into their G series of devices, they've also made something of a name for themselves when selling budget-minded hardware to those that might otherwise not be able to afford the latest and great. LG have been doing this for some time now with the L Series of devices, and they're now on the third iteration of the L Series, of which the new L Fino and L Bello will be joining to offer users a little more luxury, without inflating that price tag much more.

Fino and Bello might mean Fine and Beautiful in Spanish, but their specs do leave more than a little to be desired. The L Fino has a 4.5-inch 800 x 480 display and is powered by a 1.2 Ghz quad-core CPU with 1GB of RAM and 4GB of expandable storage, and is available in White, Black, Gold, Red or Green. Meanwhile, the L Bello is a little alrger with its 5-inch 854 x 480 display and a little powerful with a 1.3 Ghz quad-core CPU. They both share very similar specs elsewhere though, with 8-megapixel rear-facing cameras and up to HSPA+ 21mbps support. Unfortunately though, that's where the hardware highlights end, with these two being decidedly middling-offerings from LG.

Still, the company has done their best to bring a little luxury down for the G3, with Knock Code fully supported on both as well as a whole host of other features from the new G3. There will also be available a version of the QuickCircle case for both the Fino and the Bello. Both devices will be available in Brazil first and then the rest of Latin America, Europe, Asia and the Commonwealth of Independent States. Judging by these specs, we can't imagine LG asking for much here, and they should be perfectly reasonable and easy for those on a budget to pickup.