Skip to content
Trusted By Millions
Independent, Expert Android News You Can Trust, Since 2010
Publishing More Android Than Anyone Else
21
Today
98
This Week
871
This Month
4694
This Year
122267
All Time We’ve covered how Intel is getting into smart devices and wearable technology over the last few weeks and today I’m going to write about their Synapse Dress, a collaboration between Intel’s New Devices Group and Dutch fashion designer Anouk Wipprecht. The smart part of the dress has been 3D printed in Thermoplastic Polyurethane or TPU, the same material as you’ll find in many smartphone cases. TPU is considered a comfortable material for a dress but it’s the smart features that we are really interested in here. The Synapse Dress has the ability to pick up brain waves and heart activity thanks to the integrated headband and EKG, or electrocardiogram. It also has a proximity sensor, a camera and most obviously, a series of LED lights capable of up to 120 watts of brightness. These sensors and features are controlled by the Intel Edison platform, which has a number of different modes and these are also voice activated. The example given is related to personal space: if somebody is too close to the wearer, the proximity sensor, her heart rate or attention level will tell the dress that she is uncomfortable and it will create a super bright flow from the LEDs. The dress measures the attention level of the model and brightens the LEDs or, if the attention level reaches 80%, the integrated camera takes a picture.

Intel are keen to point out that until recently, this kind of intimate wearable technology was not practical to design or manufacture. The associated hardware was too bulky, required too much power and generated too much heat and 3D printing was not up to the task. They also highlight the creativity of the designer, Anouk Wipprecht, for her ability to incorporate engineer-like thinking into her designs. Anouk said, “…Edison allows me to integrate a super small piece of technology which can quickly compute complicated sets of signals, on-board storage and interconnect wirelessly to a lot of input data at once in a more advanced and intelligent way, to run my designs…”

Intel Edison is essentially a development IoT processor board that’s the size of a SD card (and you do remember SD cards, right?). It’s something of a competitor to the Raspberry Pi but it’s significantly more powerful and smaller. It contains a 500 MHz dual core Intel Atom processor, Bluetooth 4 Low Energy, dual band WiFi, 1 GB of RAM and 4 GB of storage. It seems perfect for wearable products but Intel point out that this is simply a development board: it is not yet ready for commercial applications. The next version is likely to be a more refined upgrade, so we can expect it to be smaller, more powerful and use less power. Intel’s website showcases a number of useful gadgets such as a smart baby monitor, a healthcare monitor but the most interesting is a smart coffee maker, that recognises when you need a caffeine blast.

Sadly, Anouk didn’t have a Synapse Dress available in my size but thanks to my mad photoediting skillz, you can gain an idea of what it might look like on me. 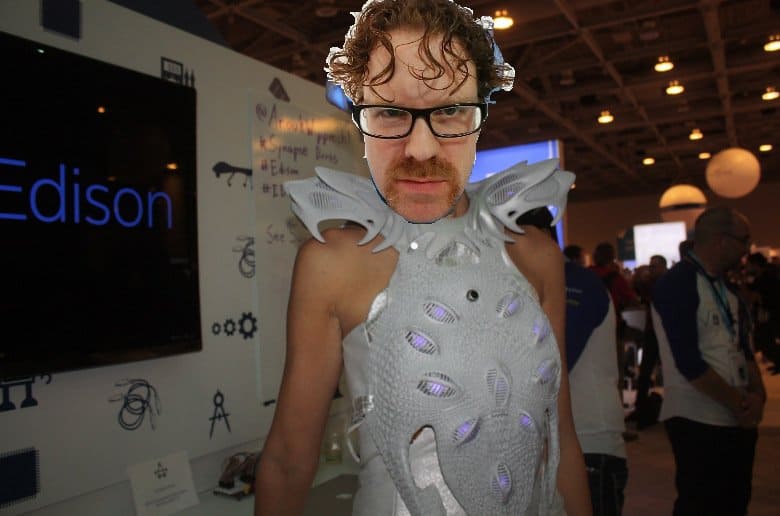