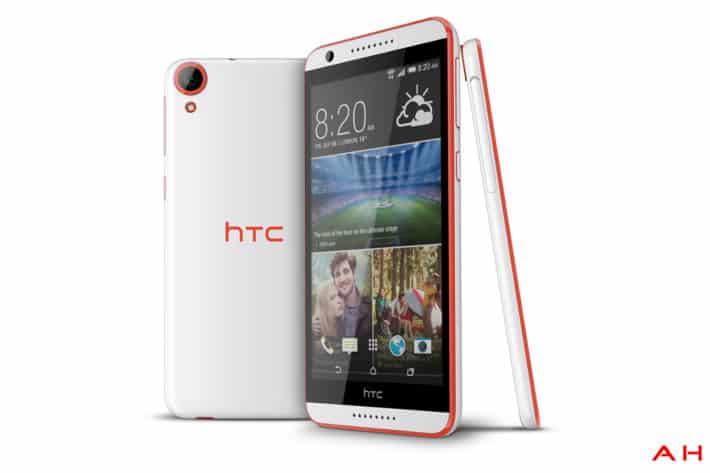 HTC has just announced a new Desire device at their pre-IFA event in Berlin. HTC Desire 820 has been rumored lately and is not official. The device is sporting a 5-5-inch 720p (1280 x 720) display along with Qualcomm's Snapdragon 615 64-bit octa-core processor (four 1.5GHz cores and four 1.0GHz cores). 2GB of RAM is also part of the package while the device comes with 16GB of internal storage. 13-megapixel camera (f/2.2 lens) can be found at the back of this device with an 8-megapixel shooter located up front. 2600mAh battery is here to make sure your device is up and running throughout the day. Android 4.4 KitKat comes out of the box, though HTC has promised the device will be updated to Android "L" in the future in order to take advantage of the 64-bit Snapdragon 615 which is located inside. The device also comes with a pair of BoomSound front-facing speakers which HTC is well-known for and a unibody polycarbonate design. This is a 4G LTE Cat 4 capable device. The device will be available in a bunch of different colors (black, white, pink, red and turquoise) which you can check out in the gallery below.

"Our new HTC Desire model gives entertainment lovers exactly what they are looking for; a powerful, fast, stylish smartphone that delivers their favourite content on a big screen at a competitive price. With the HTC Desire 820, we've combined the most advanced technology with the best possible entertainment experience and bold, distinctive design, to deliver a handset that is both desirable and affordable." said Peter Chou, HTC CEO. The HTC Desire 820 will be available worldwide starting at the end of September 2014. It is quite interesting HTC decided to include the Snapdragon 615 in this device, a 64-bit octa-core processor. Anyhow, this device will certainly have a lot of competition on the market with a bunch of manufacturers pushing their devices to the market at approximately the same time, post-IFA. Hopefully HTC will get the price right, considering they didn't share any details when it comes to that except that the device will have a "competitive price". Do you like this device, is it something you might buy?