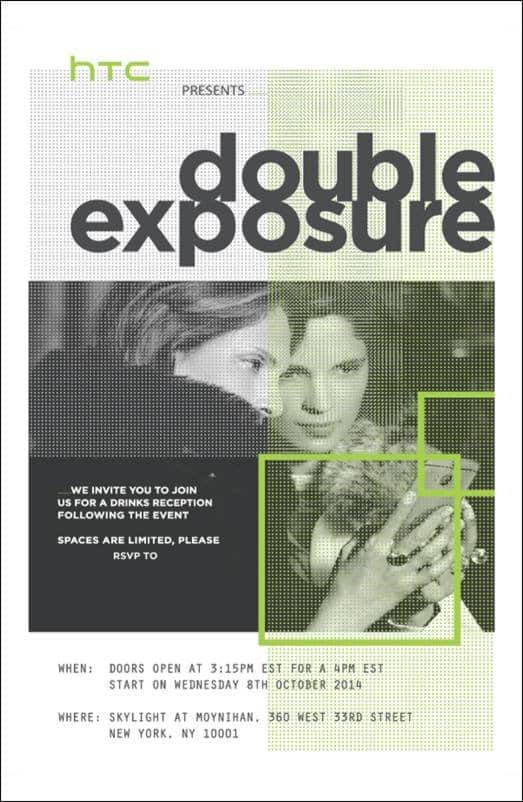 We've received the above mysterious invitation from HTC for Wednesday afternoon on October 8th in New York City.  The picture depicts two women holding an HTC One M8 likely taking some sort of selfie, and it begs us to wonder exactly what HTC is going to announce at this event.  Double exposure certainly makes you think of photography for a number of reasons.  HDR photos use more than one image at different exposure levels to stitch together a photo that looks more like a natural view of the world from your eyes.  Given how popular selfies have become in recent years and how we've started seeing phones from different manufacturers featuring selfie cameras, this could be a new selfie phone from HTC with some nice photography capabilities, including HDR, on the front-facing camera.

Then of course there's the whole Nvidia debacle that just happened, where Nvidia put out documents in its court case against Samsung that confirm the existence of an HTC Nexus 9, complete with a Tegra K1 chipset inside.  This is a huge deal for HTC who hasn't had a Nexus contract with Google since the original Nexus One way back in the beginning of 2010, and it gives Nexus users a brand new tablet that's a little bigger than the Nexus 7 but not as big as the Nexus 10.

There's also the possibility of HTC announcing a variant of the J Butterfly 2, which recently launched in Hong Kong, and features a considerably better camera than most HTC phones as of late have.  The Butterfly 2 takes a 13MP sensor that's become popular in most flagship phones and combines that with the awesome Duo Camera from the HTC One M8 to give you great resolution and quality shots with all the nifty photo tricks from the Duo Camera software.  Verizon saw an exclusive version of the original J Butterfly back in 2012 as the Droid DNA, so it's entirely possible that we could see such a thing again here in the US.

Lastly there's a very narrow possibility that the rumored HTC smartwatch could come up at the event, but given recent rumors about that project being canceled outright, as well as the tagline of the event, we're not thinking the chances there are very good.  Regardless of what they announce it'll be great to see more HTC devices coming out soon, as their catalog of devices this year have been pretty slim.