So you might have noticed the parade of articles detailing the launch of Google’s Android one program in India earlier today. If you aren’t quite sure what Android One is all about, in a nutshell its about Google getting an Android smart phone into the hands of the next billion people, and doing so at a budget price and Tom has more info about it all here and here’s some info on Micromax’s Android One offering. Android One isn’t just about hardware though, and whats the use of selling a budget phone if people can’t afford the mobile data to use your apps properly? One such app is YouTube, and Google are changing the way it behaves, in India at least anyway according to the image below.

How is Google changing its behaviour? Well, instead of the user using their precious mobile data to stream their preferred content as and when they want to, Google are going to Android One users to download YouTube videos to view at a later time while offline. This means that instead of blowing their entire data allowance on one or two videos, users can now download the required material via WiFi at home so that they have the content stored on their phone to watch when and as they please. This has the added benefits of allowing users to avoid the excessive fees charged by telecoms for going over agreed data limits, and also allowing users to watch content in areas where there is no mobile signal.

This new feature was advertised on the Android One website, and is ‘Coming Soon’ according to the promotion materials. So you would think that the ability to watch YouTube videos offline would become available sooner rather than later. Other than that, Google are holding its cards close to its chest, and there’s no details whether this will become available outside of India, or anywhere else that Android One is (eventually) launched.

What do you think? Regardless of where you live, not everyone can afford to pay for unlimited data for their smart phones. So, would the ability to download videos on WiFi and view them later be of use to you? Is it a feature that you would like to see brought to your country? Let us know in the comments below or at our Google Plus page. 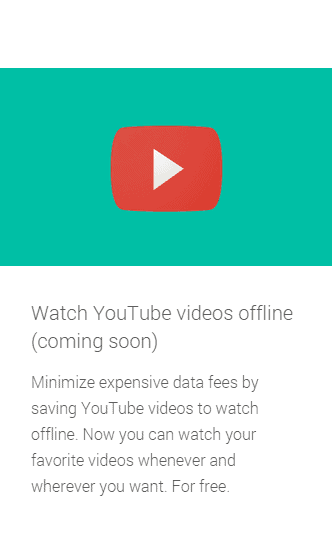