Skip to content
Trusted By Millions
Independent, Expert Android News You Can Trust, Since 2010
Publishing More Android Than Anyone Else
70
Today
70
This Week
838
This Month
8128
This Year
125614
All Time

Xiaomi has been in the news a lot lately, but for all the bad reasons – of course, bad press is still press and can sometimes even boost sales, especially when it calls your design a “copycat” of the iPhone.  Xiaomi’s new ambassador, Hugo Barra, has spent the past month defending his company’s design, as merely inspired by Apple’s iOS 7 and not a copy of it.  Silicon Valley, he tells us, does not believe that innovation and inspiration can come from within China itself – all they can do is clone a good copy.

What is so funny is that Xiaomi devices run the MIUI interface on a modified version of Android and has nothing to do with iOS.  In the midst of this battle, Xiaomi’s arguments are not being helped by the release of their newest operating system, MIUI 6 – where not only the ‘flatness’ and gradient rainbow colors resemble Apple’s iOS 7, even the calendar, compass and calculators all are Apple-like in their looks.

When Xiaomi talks about their new MIUI 6, they focus on a more powerful systems applications and better integration and ease of use.  Through their cloud services, the user’s work can be accessed for all devices – sounds like what all manufacturers are striving to do.  Xiaomi claims that MIUI 6 really focuses on new built-in security so that it is more stable and with the deep integration of Tencent / Jinshan / LBE and other professional security technology that no third-party programs are necessary.  Clean Master, long an Android booster program (I have it on my own personal device) is now standard fare in MIUI 6 – which is not surprising as the CEO of Xiaomi, Lei Jun, is Chairman of the Board of Cheetah Mobile that makes Clean Master.

It is not really fair to call MIUI 6 an Apple ‘look-a-alike’ when most of the new operating systems and UI’s are headed in the direction of ‘flat and colorful’ and to call Apple the first to do that is a little naive, as many of the designs were being worked on before iOS 7 was even released – in fact at the time of its release, it took on many of the Android characteristics…manufacturers are simply keeping up with the times. Please, why do we flatter Apple so?

Please hit us up on our Google+ Page and let us know what you think about Xiaomi’s new MIUI 6 operating system – too similar to iOS 7 or is iOS 7 too similar to MIUI 6, or does it really matter…as always, we would love to hear from you. 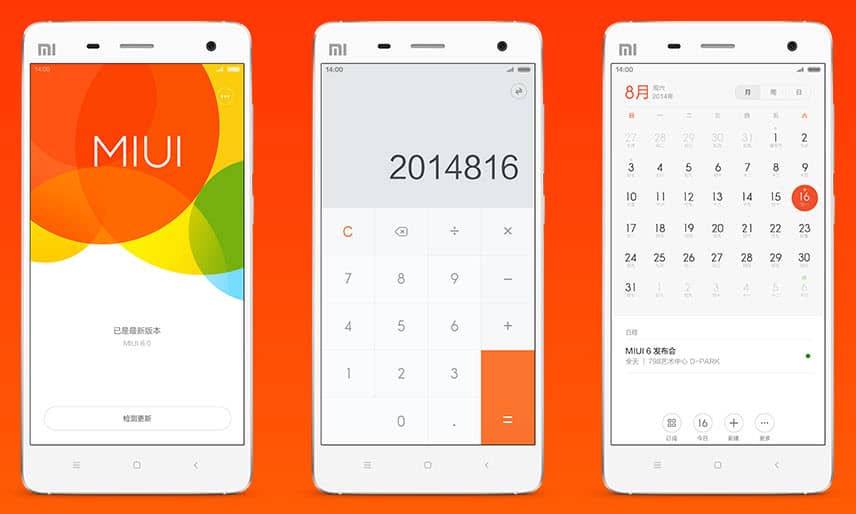