It seems that most people that have flown with Virgin America have nothing but positive reviews of the in-flight ambiance. Well, it seems that Virgin America is intent on giving their customers the best in-flight experience in the business by now equipping their crew members with a slightly tweaked version of the Nexus 7 tablet dubbed, the Nexus 7 CrewPad, in order to improve efficiency.

What a shocker! The Nexus 7 tablet that we all know to function without a hitch due to the lack of bloat and always fresh software has been well received by the crew after there thirty day trial! Though this doesn’t come as a surprise to any of us who know and love Nexus devices, let’s hear why the crew likes their much needed upgrade so much. I will also show you a nice picture of the out dated joke that they were using before a little later. According to the crew, not only is the Nexus 7 faster, lighter and smaller than the bricks that they were using before, but a major reason why they like the Nexus 7 CrewPad so much is the ability to update the tablet’s software while still going about their work.

The Nexus 7 was an amazing device back in 2013 and still beats out many of the tablets that have come out this year as well. If you are interested in a smoother functioning seven inch tablet that is actually up to date and is sold here in the states you would be hard pressed to find anything that comes close. This becomes even more apparent if you intend to remain in the sub $200 range. As of this writing, a quick Google search will show you that one can be had for as low as $189 from Walmart.

The crew must have been happy to have gotten this thing off of their hands, literally. 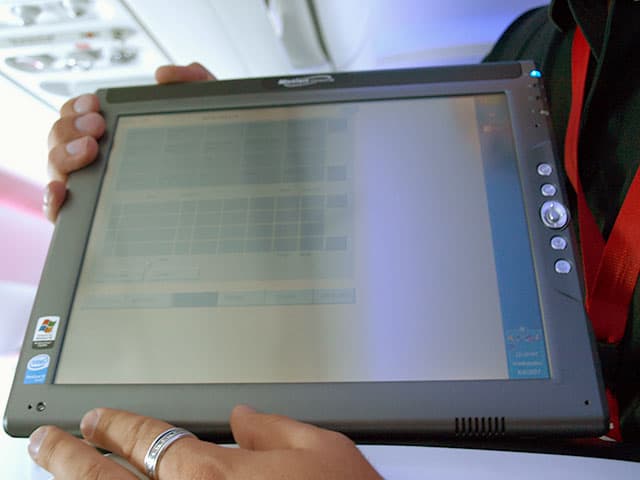 This antiquated thing is the Motion LE 1600 Tablet PC. This is what that poor crew had to deal with for all this time. It weighed in at 3.1 pounds. Now that might not sound like a lot but imagine carrying this thing around for the whole day, I bet that doesn’t sound like fun. In comparison, the nexus 7 2013 model only weighs 0.64lbs. We should also remember that these people are on their feet for the whole day so it must have been brutal. If the weight wasn’t enough to make you understand how painful this might have been for the crew, these specs below might.