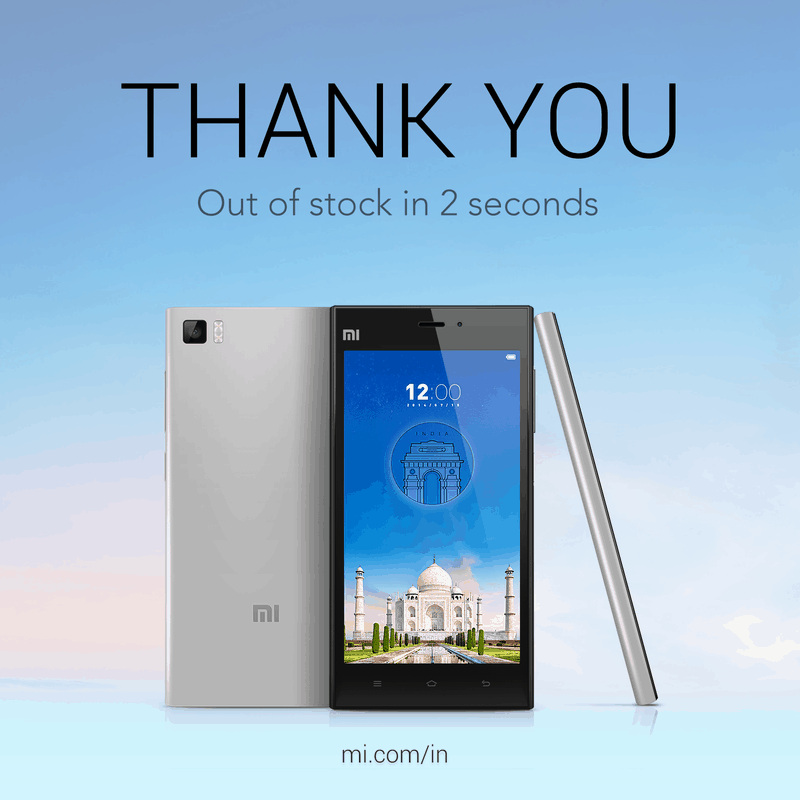 Xiaomi is still doing their flash sales, which I'm not surprised at. This morning they put the Xiaomi MI 3 on sale over in India, and they sold out in about 2 seconds flat. They sold 15,000 Mi 3's in that amount of time. That's just crazy, right? But that's how they sell their devices. Make a big batch, put them on sale, they sell out in record time, then they are out of stock for a while. Prior to this batch of Mi 3's in India, Xiaomi has already sold 20,000 Mi 3's there, in two batches. The first one took about 39 minutes to sell out, while the second one took about 5 seconds.

The Xiaomi Mi 3 is being sold for INR 13,999 ($230) in India right now, which is arguably the best deal in smartphones over there. As devices like the LG G3, Samsung Galaxy S5, and the HTC One M8 are all pretty expensive, and have relatively the same specs. In fact, the Mi 3 is even half the price of the Nexus 5, which is kinda surprising. Xiaomi reported that over 100,000 people registered interest in today's flash sale. Which is no surprise given how great of a deal this device is. Xiaomi also just launched a few accessories for the Mi 3 over at Flipkart, so those that were able to get their hands on a Mi 3 in today's flash sale can go ahead and pick up some accessories for their new phone.

Xiaomi has been doing these flash sales for quite some time now, and they aren't the only Chinese OEM doing this. While it's great for press – obviously since we are writing about it – it's not always good for customers. As you can't just up and decide you want to order one today, you have to wait for the flash sale, which does suck. As that's not what we are used to in the US. So if they do come into North America, that tactic won't work, or not as well as in China and the rest of Asia, at least.