Sprint just dropped some new plans on us yesterday. They look like a good deal if Sprint’s network is also decent in your area. They can definitely save you some money and get you more data than what other carriers are offering. Sprint’s plans will give you about twice the amount of data that you get with comparably priced monthly plans from AT&T and Verizon. Analysts are saying that the new plans won’t be enough to turn things around for the company, however. New Sprint CEO Marcelo Claure may be offering more at a Sprint event planned for this evening, but analysts don’t think these new plans will be enough, by themselves.

Sprint’s new plans are being called a Family Share Pack. They’ll be available to consumers on August 22. The starting rate per line is $40 with subsidized phones on a two-year contract. If customers opt for Sprint’s payment plan, called Easy Pay, then the phone cost can vary based on how much data the family needs. Wireless hotspots can tablets can also be added. Every Family Share Pack plan comes with unlimited talk and unlimited text messaging. Data is added in buckets based on how much you think you’ll use in a month. Sprint is pushing the fact that for $160, a family of four can get four smartphones with 20GB of shared data. $160 on AT&T or Verizon will only get you 10GB of data for the month. 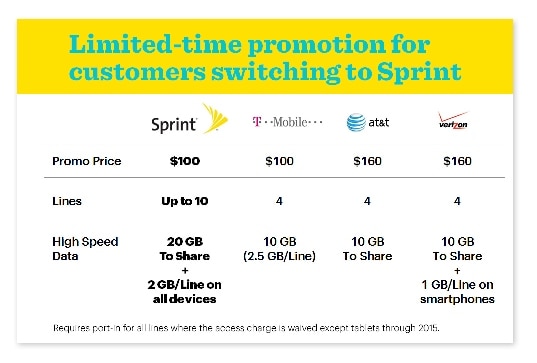 Sprint is also buying out contracts like T-Mobile is currently doing. There are some rules that customers will have to follow in order to qualify, though. You’ll have to switch your numbers and activate on a new Family Share Pack between August 22 and September 30. You’ll also have to purchase a new device on the Sprint Easy Pay plan to qualify. The company will then send you a Visa Prepaid Card worth up to $350 per line to cover your early termination fee from your old carrier. Sprint is also waiving any additional data access charges for smartphones, tablets, and mobile hotspots if you’re on a 20GB or higher, all the way through the end of 2015. These new plans will also take the place of Sprint’s existing Framily plans. This sounds pretty confusing, but you have to do everything at a Sprint store or through their telesales division, so a rep can break it all down for you if you aren’t catching on.

It’s cheaper, yes, but analysts think that it’s not cheap enough to make a big difference for Sprint. Competing on price is a quick way to cut profits even if it is enticing to consumers. With all of the network upgrades that Sprint is doing and needs to continue, is cutting prices the best move for them? What do you think?