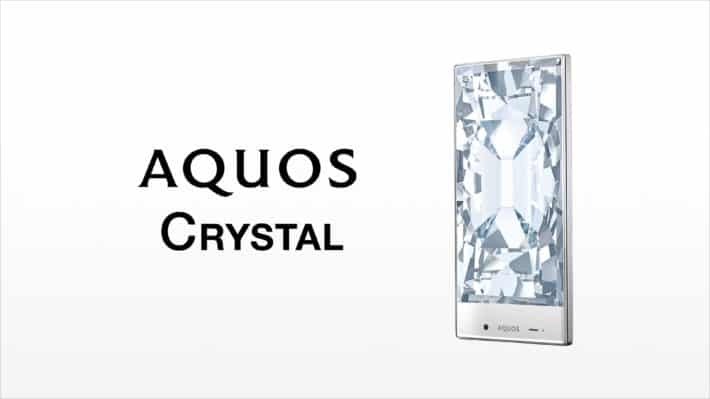 Earlier today, we reported that Sharp has done it again; announced another crazy smartphone for the Japanese market with incredibly slim bezels. While that might not sound all that exciting, especially as Sharp often announces super-cool stuff that never, ever reaches the States, there's something else here that should excite people. Well, at least those on Sprint anyway, as the Aquos Crystal may well be headed to Sprint. This would not only be a nice new – more importantly, different – addition to Sprint's device lineup, but it'd also be one of the few times that a device like this has made its way West.

As we reported a little while ago, Sprint is holding a Press Event for tomorrow August 19th, with the tagline of "take the edge off", with an invite full of crystals, not unlike the promotional image from Sharp, above. So it would seem that Sprint is looking to take the edge off their smartphones with the introduction of the Sharp Aquos Crystal, which pretty much has a screen for the entirety of its front. Softbank – the same Japanese Softbank that owns pretty much all of Sprint – has announced that the device will be available sometime around August 29th, and with a press invite that looks very close to promotional material from Japan, it'd be a safe bet to put our money on the Aquos Crystal heading West.

If you're curious as to just what these two devices are – which come in 5 and 5.5-inch models – then you can take a look here. Essentially, these are devices that put style ahead of anything else, but the 5.5-inch model does feature a Snapdragon 801 clocked at 2.3 Ghz with 2GB of RAM to go along with that 1920 x 1080. As well, the smaller 5-inch version features a quad-core Snapdragon 400 at 1.2 Ghz CPU (capable of 4G LTE) with 1.5GB of RAM, and would make a nice, good-looking mid-ranger for anyone on Sprint. The 5.5-inch model, with its Snapdragon 801 is also known as the Aquos Crystal X and might well end up being a Japanese exclusive indefinitely, we're hoping that isn't true however.

Above all though, the Aquos Crystal could be a very good chance for Sprint to show other carriers that they're more than capable of turning heads. Devices like these might still feature Android 4.4.2 like many others, and be essentially a display with a processor underneath, but they're decidedly different. With the Galaxy S5 and HTC One (M8) et al all available on every carrier going, this could be a way for Sprint to stand out. Still, we're hoping for word of availability on other carriers as well, but news for Sprint users should come tomorrow during their press event.