Here we go again – the infamous Samsung 3-sided display. once rumored to be on the next Galaxy Note 4, is making the news again.  ZDNet of Korean is circulating the latest news as told to them by a Samsung Electronics Parts Supplier regarding this 3-sided plastic-based OLED wonder.  We know for a fact that Samsung filed the necessary patents and drawings for the 3-sided display (Youm) quite a while ago and we have several photographs of its actual existence. According to their source, they claim that the display is entering the final phases of testing and could be in limited production by the end of 2014 – so that should squash any rumors that it will show up on the Galaxy Note 4, slated for a September arrival.  That, and the fact that they are telling us that it would only be able to produce the display in limited quantities means that there is a possibly of a limited edition later in the year…but according to our source, it would most likely only be sold in Korea, like the Samsung Galaxy Round. In other words, it will be a high priced toy only for a select few in their own country. So MAYBE we will see it on the Galaxy Note 5, unless Samsung believes that this could be the design change and innovation that their Galaxy S6 could benefit from to increase sales.

Samsung Wireless Business Unit Managing Director said, “The features in detail to be said, but there are plans to launch new models and innovative flagship in large screen category of preparing an attractive flagship applying innovative materials.”

I know from past rumors about this 3-sided Youm display that many people could not see the usefulness of the design…to them I say, “open your eyes,” as this really could be a big game changer for Samsung.  The 3-sided display could be used for a number of purposes, such as the ability to swipe up on the right side to unlock the screen and to swipe downward (towards you) to lock the device.  Another feature, as seen in some of the patent designs, would be to have bookmarks when reading a book – you could simply touch the bookmark and jump straight into that particular book.  What about multitasking?  One of the side panels could give you immediate access to an opened window, and a swipe could close them all.  Rather than entering multiple screens or using multiple presses on the screen, the information would already be showing on the side displays depending on what application you were working with at the time.  It would also be an ideal area for notifications to pop up…besides, it just looks so damn cool.

Please hit us up on our Google+ Page and let us know if you are excited about the 3-sided display…as always, we would love to hear from you. 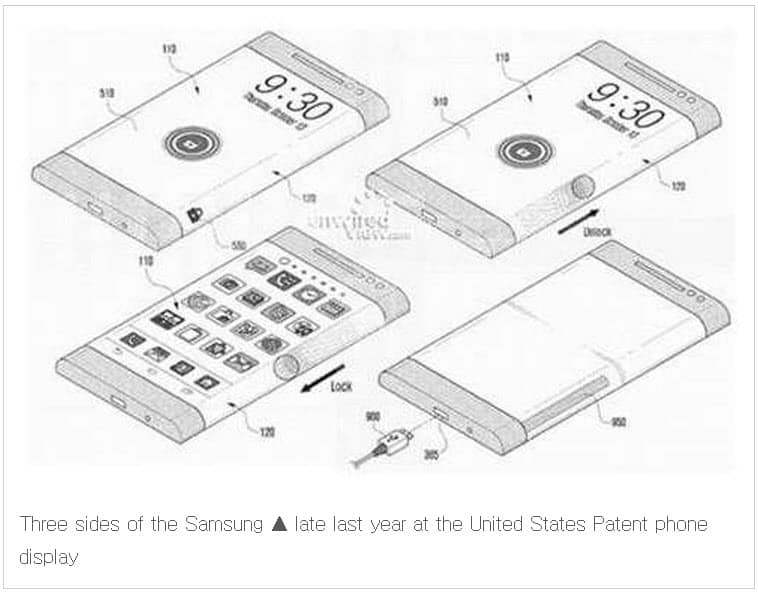