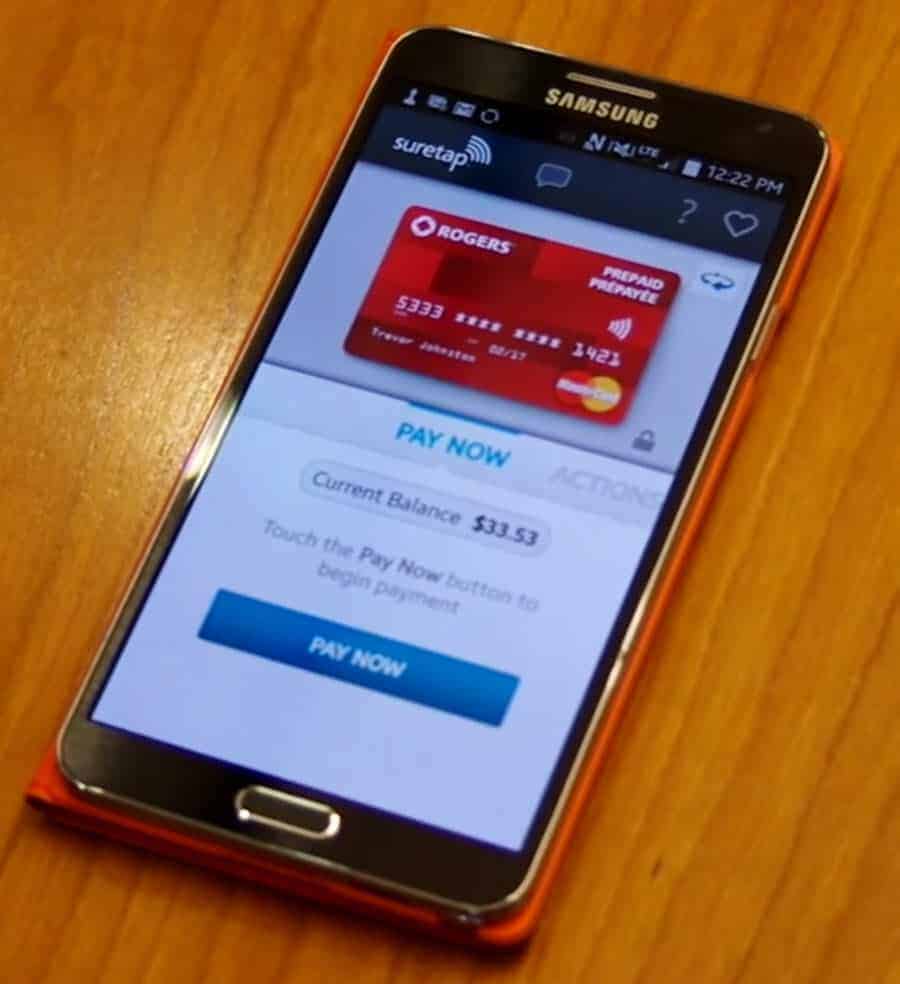 It was April that Rogers launched their Suretap Wallet product and they have added a number of devices that are Suretap "certified."  The many Samsung Galaxy devices can already use it (shown above) and today they have officially announced that the newest LG G3 is Suretap certified and ready to use via an official tweet from @RogersBuzz.  This will allow owners to use their smartphone to make secure credit card payments and purchases using the CIBC, TD or Scotiabank apps or with Rogers' own Suretap Wallet.  Rogers had said that all future NFC-compatible Android and BlackBerry devices would arrive with the Suretap Wallet app already installed.

The app and companion secure SIM card are being offered free from Rogers and will allow users to store a prepaid MasterCard and loyalty account cards from a number of stores – Indigo and Cara Foods' many offerings (Swiss Chalet, Milestones, Harvey's and more).  While Rogers does intend on adding credit card storage in their Wallet, most banks have already included the secure and touchless NFC-based payments with their own apps – however, it would certainly be nice to store all of your credit cards under ONE app, rather than having to keep several on your device.

While the process is quite simple – you need a Suretap Ready Device, which includes all of the latest Samsung, HTC, LG and BlackBerry smartphones – a Suretap LTE SIM Card installed in your device – the Suretap Wallet App, available FREE from Google Play Store or BlackBerry App World – and an added Payment Card, like Rogers' Prepaid MasterCard.  When you go to a merchant to make a purchase, rather than holding you credit or debit card in front of the reader, you simply push the 'Pay Now" button on your display and you have 20 seconds to place your smartphone within 4-10cm of the terminal reader and the payment is made using the NFC part of your device.  The POS reader does not know or realize if you are using the real credit card or your smartphone – it recognizes them both the same way.  There is a snafu – for security reasons, the amounts right now are limited between $50 to $100 per transaction, but as far as finding a vendor to accept this type of transaction, they claim that about 80-percent of the Canadian point-of-sale terminals are ready for this change.

Please hit us up on our Google+ Page and let us know if you are using or will be using Rogers' Suretap Wallet app on your eligible smartphone…as always, we would love to hear from you.