The latest smartphone marketshare numbers for the second quarter of 2014 are out and posted, and surprise surprise, Android is once again the leading OS for smartphones shipped. Up 33% year over year, Android based smartphones in Q2 shipped in the quantity of 255.3 million devices, that's a pretty huge number and nearly 15 million more units than the total number of smartphones shipped from all vendors and OS's from last years Q2. A huge factor in this set of gains for Android lies in devices that cost under a $200 price point and were launched in emerging markets. Throughout the second quarter of 2014, Android was reported to having nearly 60% of their device sales(58.6% to be exact)come from off contract phones that were retailed at $200 or less. Those rock bottom prices for smartphones running the Android OS were obviously hard for customers to pass up, and painted Android as a very attractive option compared to competitors.

As Research Manager Ramon Llamas from IDC's Mobile Phone team points out, the number of Android device sales under the $200 mark will only grow once Android One devices begin to hit the market. Google announced Android One at this year's Google I/O developer conference back at the end of June, which are devices aimed at emerging markets and costing a considerable amount less than high end phones while also being off contract, and coming from a selection of different vendors including Micromax, a current low cost Android OEM set in India.

Other highlights of the report point out that Android not only once again grew in marketshare from last year at the same time, but they also nearly doubled their marketshare from just three years ago. In 2013 Q2, Android accounted for 79.6% marketshare with 191.5 million devices shipped globally, and this year their marketshare grew to 84.7%. IDC also details that Samsung(probably to no surprise of anyone)was once again the leading OEM in the Android space for shipped devices, grabbing up 29.3% of all Android powered devices that were shipped in the quarter. However, Samsung marketshare is also dropping, continuing with the trend of the large manufacturer losing marketshare to other smaller OEMs as Samsung's marketshare was 40% of all Android powered devices shipped just two years ago. By this time next year, will Android grow to somewhere between 85-90% marketshare for units shipped, and will Samsung rise or fall? 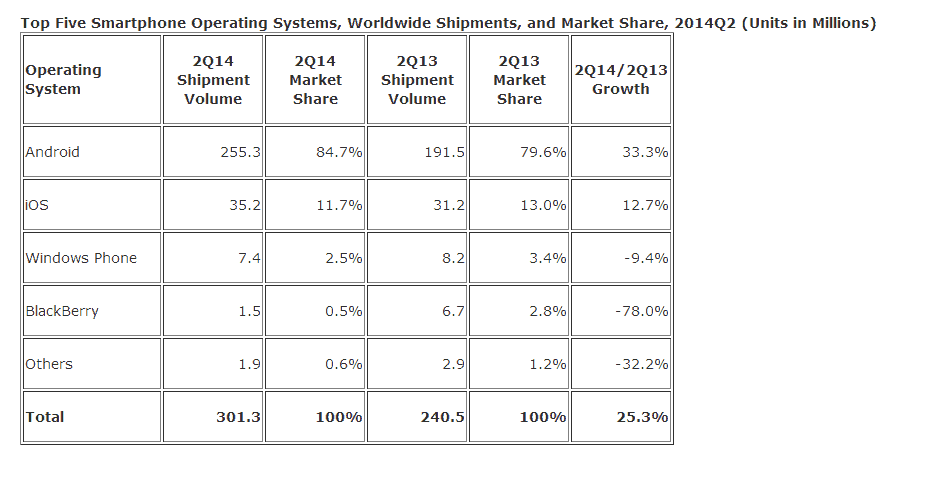 Advertisement
iCharts
Advertisement
Trusted By Millions
Independent, Expert Android News You Can Trust, Since 2010
Publishing More Android Than Anyone Else
0
Today
186
This Week
106
This Month
4093
This Year
105570
All Time
Advertisement