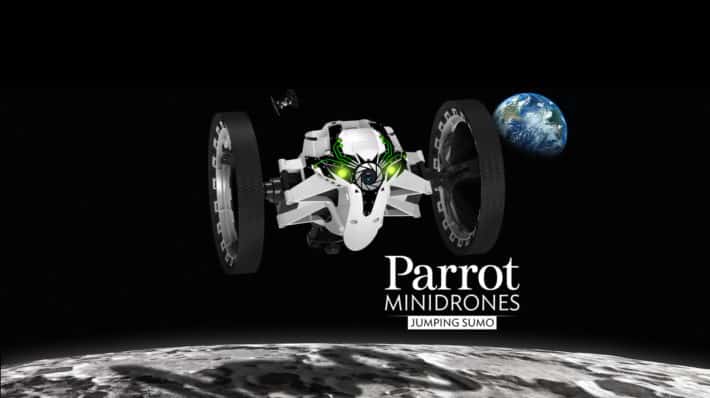 The U.S. government may have reserves about Amazon delivering packages to your home via air drones, but that doesn't mean that you can't get a hold of your very own Parrot drones to pilot around for fun. Parrot, a company which makes a selection of remote controlled drones has apparently partnered up with Sprint to sell two minidrones that you can control with smartphones or tablets, called the Rolling Spider drone and the Jumping Sumo drone. Forget all practical reasoning as to why owning something like this matters or how it would benefit you, just watch the video and feel the awesome oozing out of it. Do you feel it? We did, and we want them, because they look cool and who could resist jumping that little sumo minidrone onto stuff?

Sprint reports that they are among the first retailers who will carry both these little minidrones which means that they won't be the only place you can buy these at some point, but for now it looks like they'll be one of the only major companies to where you could pick one up. Sprint also says that they're coming soon which means they aren't quite available yet but they surely look worth the wait. How long of a wait? They are due to arrive in Sprint stores on August 15th so really not that long. Both these minidrones can be used as we said with an Android smartphone or tablet in partnership with the companion app that can be downloaded from the Play Store called "free flight 3".

Both the Rolling Spider and the Jumping Sumo are affixed with cameras so you can see all that's going on and of course control your little drone from wherever you are inside the house as shown in the video. The Rolling Spider has 1GB of onboard flash memory that you can use to take and store photos, while the jumping sumo has a wide angle camera that can take photos and record video, and it can either stream them to the screen of the device you're using to control it, or store them on a microUSB stick. The Jumping Sumo can also take 90 degree turns and jump up to 80 centimeters in height and length. The Rolling Spider can have two large wheels attached, which lets the pilot take their minidrone all over on the ground, but also up the walls and onto the ceiling where it can continue travel. Both minidrones come equipped with a 550mAh battery that can be recharged during downtime. The Rolling Spider will cost $99.99 when launched, and the Jumping Sumo will cost $159.99.