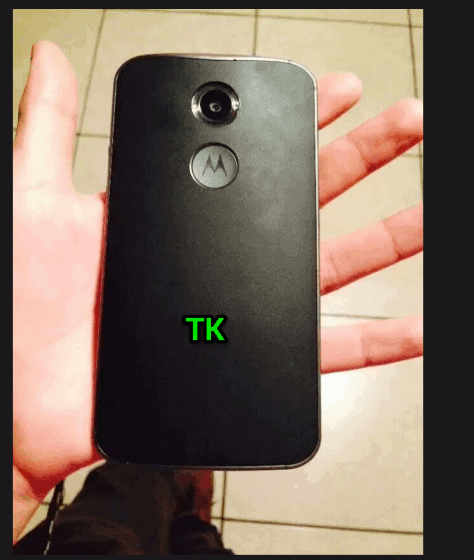 Motorola's event in Chicago is less than a week away and the leaks just keep on coming. This time around we have an alleged Moto X+1 posing for the camera with a leather back, courtesy of TK Tech News. As you can see in the image below, the device goes hand in hand with the previous leaks, at least as far as its back side goes. You can see the texture on the back and it also seems like it has been scuffed every so slightly, worn leather look anyone? That would be cool, maybe not for everyone, but I'd certainly appreciate it and I believe I'm not alone on this. One more thing to notice here is the back logo, it's black and gray here, in the previous render leak by @evleaks the logo was black on black and white on gray (white logo, gray background). This time around we get a black logo on a grey background, could this mean we'll get customizable logo's as part of Moto Maker? These are already 3 different combinations of Motorola's back logo, so it seems logical.

According to the leaks GFXBench benchmark results, Moto X+1 will sport a 5.2-inch 1080p (1920 x 1080) display and will be powered by a Snapdragon 800 processor with Adreno 330 GPU. The device will reportedly come with 2GB of RAM for your multitasking needs, a 12-megapixel camera on the back along with a 2-megapixel front-facing shooter. 16GB of internal storage was also mentioned (other options will probably be available as well) as well as Android 4.4.4 KitKat as the operating system (version) of choice.

Motorola will unveil Moto X+1 along with Moto G and Moto 360 smartwatch at their event in Chicago on September 3rd. We've seen many leaks and rumors thus far and we probably know the majority of details when it comes to the Moto X+1, though Motorola might yet surprise us. Either way, the event is close, less than a week away so we'll find out everything soon enough. Anyone interested in the Moto X+1? Would you like to have a leather back and customizable logo option as part of Moto Maker?