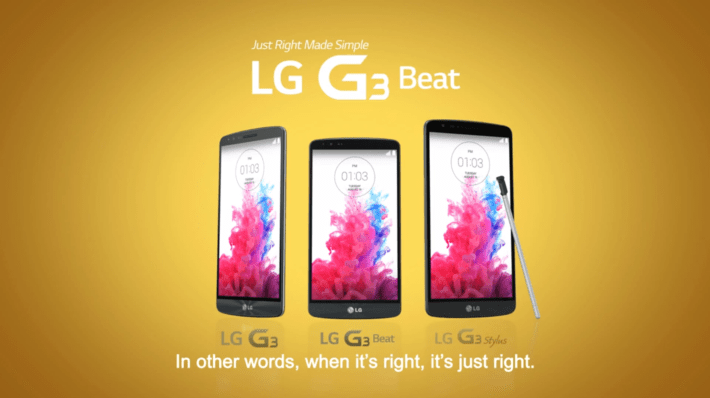 Earlier this week, LG leaked out the LG G3 Stylus in a promotional video for the LG G3 Beat. We all got excited because it looks like a slightly larger device, compared to the G3, but it also has a Stylus. So it might be competing with the Samsung Galaxy Note lineup. Well sadly, that's not the case. Even though everyone will be comparing it to the Galaxy Note 4, it's not meant to compete with that. It's going to be more along the lines of the LG G3 Beat, with mid-range specs and a larger screen. Oh and don't forget the stylus. All this is coming from a report out of the Korean Times.

No specs were given on the LG G3 Stylus, but we're venturing to guess that it'll be like the LG G3 Beat. So we're likely to see a 1080p display, Snapdragon 400 processor, either 1 or 2 gigs of RAM, and 16GB of internal storage. We may even see the same camera module. As the LG G3 Beat has a 8MP camera but still has laser auto-focus on board. Which definitely makes a big difference. So far nothing is official, and these are all just rumors. But I'd expect LG to push out a press release rather soon about the LG G3 Stylus. Probably later tonight.

So what about the LG G3 Stylus and Beat coming to the US? Well the Beat we've seen hit the FCC and also leaked for Verizon, but as the LG G3 S. But the LG G3 Stylus, we aren't too sure. It could just be the LG G Vista that's on Verizon, but adding a stylus to it. We'll  have to wait for official word from LG before we know for sure. How many of you are still interested in LG's G3 Stylus, even if it isn't high-end?