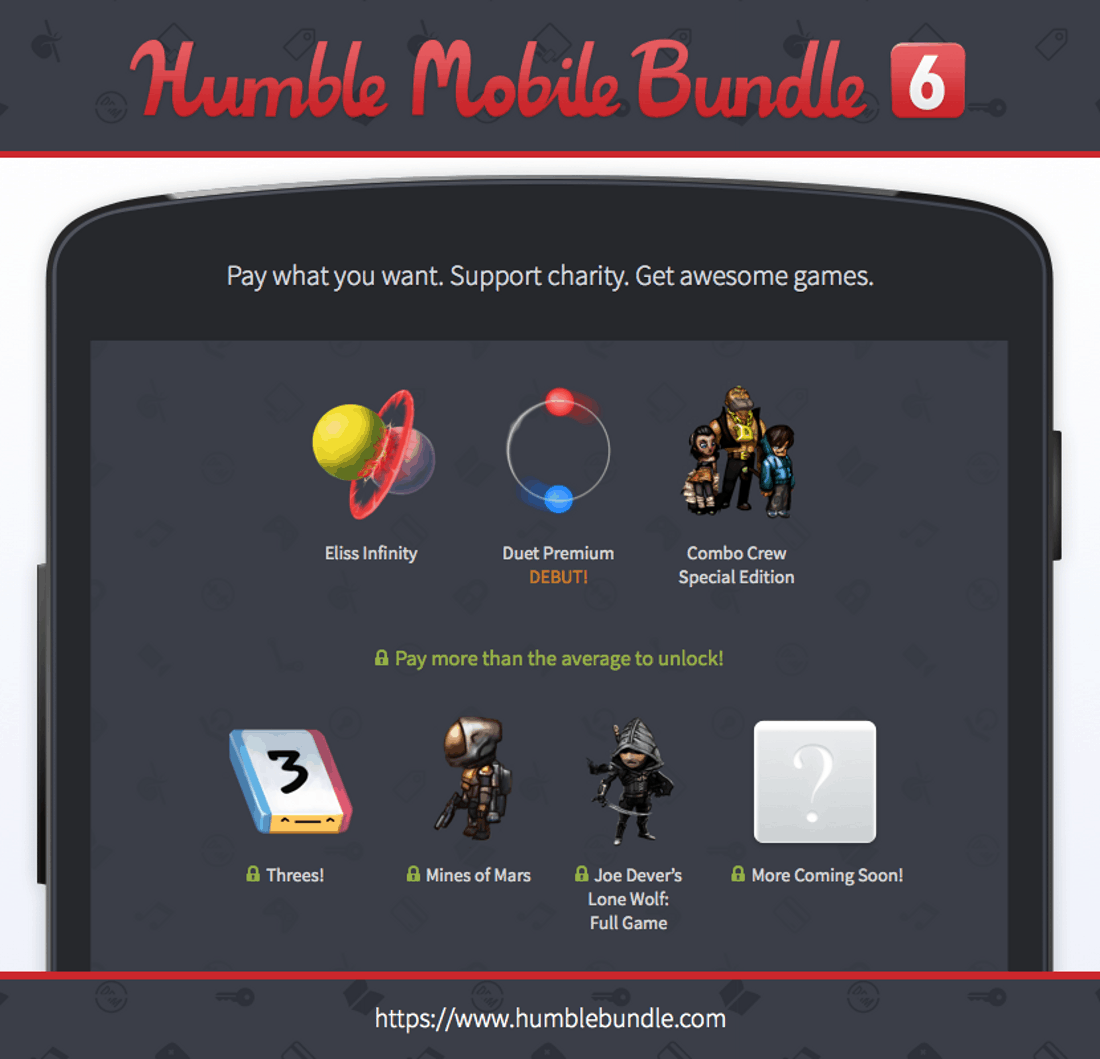 Humble Bundle has been around for some time now but if you're still not familiar with what it is, it's a bundle of games that comes out every so often where you can pay what you want for some awesome games, and all the money goes to charity, humble bundle and the developers of the games. Since you pay what you want, you can also decide how to divvy up your cash, whether you want most of it to go to the devs or the biggest chunk to go to charity. Sounds awesome right? When it comes to the games, there will usually be three games that are accessible to download when you pay whatever you want and three others that are accessible only after you unlock them, which is doable after you pay whatever the average amount is at the time of your purchasing the pack of games.

This time around we have Humble Mobile Bundle 6 and to start there is 6 great games included. More are usually added after a couple of weeks as additional unlockable games and then the bundle continues for another week or two. Included in the pack for any price there is Elliss Infinity, Duet premium, and Combo Crew Special Edition. If you pay more than the average price at the time you'll unlock and also be able to download Threes!, Mines of Mars, and Joe Dever's Lone Wolf: Full Game, all three really great games and the definitely great additions to the pack.

If you decide to allocate more of the money that you pay to charity, Humble Mobile Bundle 6 supports Electronic Frontier Foundation and Child's Play Charity. Both Threes! and Elliss Infinity are puzzle games, Elliss Infinity in particular I found to be quite amazing. Duet Premium is making its Android debut through this bundle, and is somewhat of an atmospheric arcade game. It tasks you with guiding these two circles,(one red, one blue)around obstacles that comes up as you move forward with some amazing atmospheric music in the background, and a soothing voice to narrate things as you go. Combo Crew is an action game that has you climbing a tower floor by floor pummeling you way through enemies by unleashing strings of combo attacks, now including playable characters like Ryu, Chun-Li and Blanca as well as other Capcom characters(IAP only). Mines of Mars is an atmospheric RPG mining game with a surprisingly deep story, huge bosses to fight, tons of gear and weapon crafting to use while you mine deeper and deeper under the surface of the planet mars. It houses tons of secrets and beautiful visuals, enemies to fight and so on. Lastly there's Joe Dever's Lone Wolf, which is an interactive game book/RPG with amazing graphics and awesome story telling that is almost unparalleled. You can grab the bundle by going to the Humble Bundle website here, and you can always get your list of games that are tied to your Humble Bundle account by grabbing the Humble Bundle mobile app from the Play Store.