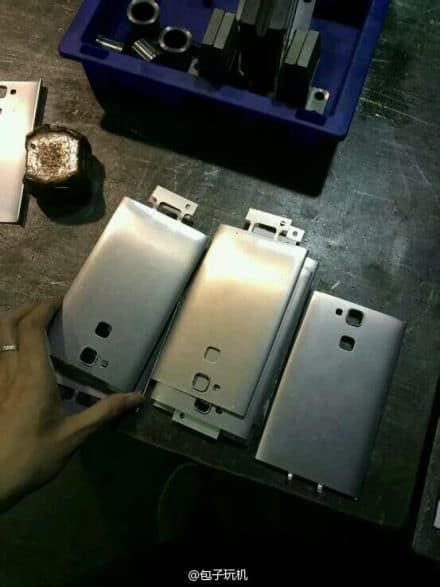 Last week Huawei sent out invites for their press conference at the IFA Expo in Berlin on September 4th, with the tagline of 'Empowering a future of exciting possibilities'. At the time, we were of the opinion that the Ascend Mate 3 was going to be announced. Today's leaked photos however, are pointing the finger at the Ascend D3 being revealed at Huawei's 90 minute long presentation.

The Ascend D3 is the long-awaited successor to the Ascend D2 launched January 2013, and the leaked pictures show a rear panel made out of metal, following the recent trend amongst Android manufacturers to explore different building materials other than plastic. As you can see from the main picture, there is a centre cut-out for the camera, with an accompanying space for the flash to its left. Below that is a cut-out that could be one of two things; it's either a fingerprint scanner or dual cameras ala the HTC One M8. My money would be it being a fingerprint scanner though.

Despite the Ascend D2 having a 5-inch display, the D3 is rumoured to have grown in size, sporting a 6-inch 1080p display with very thin bezels. Hardware-wise, the Ascend D3 is allegedly powered by Huawei's home-produced HiSilicon Kirin 920 processor which is an Octa-Core affair, backed up with 2GB of RAM and 16GB of internal storage. A 13MP camera and flash is present on the rear, with a 5MP camera on the front for those Hi-Res selfies. The D3 is though to offer LTE connectivity, and it should also be running Android version 4.4.2 Kitkat out of the box.

Decent enough specifications, but not so very different from its fellow 6-incher, the Honor 6. Where the Ascend D3 is believed to differentiate is its exterior design, and use of metal building materials.

The IFA Expo in Berlin isn't too far away now, and that means that we are going to be seeing an increase in leaks (both official and otherwise) regarding upcoming phones, despite @evleaks 'retiring' abruptly. Let us know your thoughts in the comments below or at our Google Plus page.

Advertisement
Advertisement
Trusted By Millions
Independent, Expert Android News You Can Trust, Since 2010
Publishing More Android Than Anyone Else
10
Today
26
This Week
519
This Month
3031
This Year
104510
All Time
Advertisement