As if HTC's mid-range line of Desire devices didn't already have enough digits attached to it, here comes one more. As we reported yesterday, HTC has sent out press invites for their upcoming IFA event in Berlin next month and rumor has it yet another Desire device is to be announced. However, this time around, a device with some teeth is said to be arriving with an octa-core Snapdragon 615, itself a 64-bit SoC with four low-clocked Cortex-A53 cores paired together for more powerful higher-clocked Cortex-A53 cores for some more oomph (rumored at 1.8 Ghz and 1.0 Ghz, respectively). The Adreno 405 GPU inside the Snapdragon 615 should also be enough to help their latest stand out from other mid-rangers.

Judging from HTC's latest tease on social media in China, it looks like speed and power might be their main aim with the new Desire, which is probably going to be called the Desire 820 as the figures feature prominently in the teaser. Pictures of a Cheetah, a rocket taking off, an Eagle and a supercar are all featured in the teaser, which is perhaps a not-so-subtle way of saying the Desire 820 is going to be a fast device. At least faster than previous entries in the series, which have mostly relied on the aging Snapdragon 400 and 200 SoCs.

While not much more is known about the Desire 820 at this time, it looks like HTC is getting ready to announce yet another mid-ranger during a high-profile event, much as they did earlier this year with the Desire 816 during Mobile World Congress. Hopefully, HTC will have more than just yet another Desire to add their increasingly confusing lineup of mid-rangers. The Desire 816 was a good announcement for the company and we need more devices that offers quality devices to those on a budget, rather than more of the same. A new processor at the heart of the things should help HTC stand out from the crowd, but we'll have to wait and see just what HTC has in store of us. 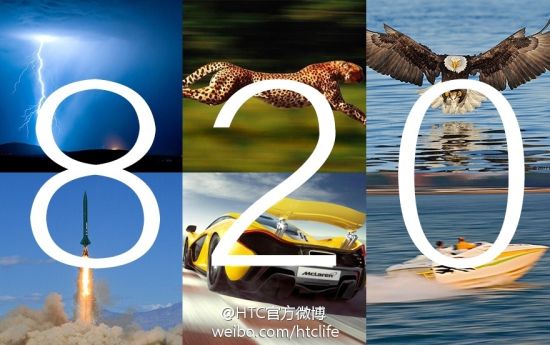 Sponsored Video
Advertisement
Trusted By Millions
Independent, Expert Android News You Can Trust, Since 2010
Publishing More Android Than Anyone Else
0
Today
222
This Week
379
This Month.
379
This Year
110565
All Time
Advertisement