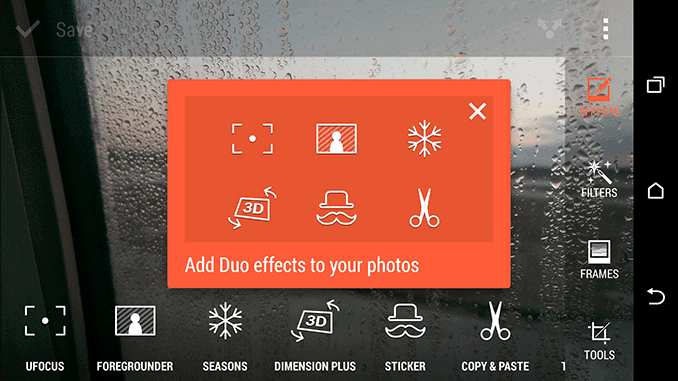 The HTC One M8 comes with some cool editing features for pictures taken using the Duo camera. You can add visual effects like 3D dimension to an image, UFocus, Foregrounder, and seasonal aspects. While all of this is fun to play with, it was difficult to share these edited images with friends and family over the internet- until now. HTC has updated the Gallery app via the Play Store, adding the ability to share Duo camera pictures on any Google hosted website.

The Duo camera allows for fun to use editing effects to bring a little more to pictures. The 3D dimension effect lets users tilt their device and the image to move along with the tilt. This effect isn’t always the best option, but on some pictures, it works nicely, giving a 3D effect to the picture. UFocus is an effect that lets users pick any point on the image to focus on. Once selected, the image will blur out the surrounding space in the picture based on the level of blur the user selects. Foregrounder is similar to UFocus, but instead of just a clean blur you can add a cartoon, pencil sketch, and more to the blur. Seasonal effects allow the user to add falling snow, leaves, dandelions, or rose pedals to the image. All of these options have been fun to play with, but when it came to sharing M8 users were having a difficult time.

Thanks to HTC releasing adding a lot of their features to the Google Play Store, HTC can easily update apps. Instead of waiting for a complete software update, HTC can just release app specific updates. This time, the Gallery app has been updated, allowing users to share their Duo pictures over the internet. Users of any HTC device will find this to be an easy task. First, take an awesome picture, then add the fun Duo camera effects to the image. Once the image has been saved to your liking, simply hit the “Share” button and select where you’d like to share the image. Done.

Now that sharing is possible with the M8 Duo camera images, let’s see them. Share your favorite pictures with us below our on G+.