Google really did start a great trend with the first-gen Nexus 7 tablet. When they introduced the thing back in 2012 it seemed just right, people reacted positively and for the price Google was asking for at the time you couldn’t get a better device of similar quality anywhere in the world. Same thing happened when the Nexus 7 (2013) was introduced, only this time we kind of expected the thing to be great I guess. Both of these devices were made by Asus per Google’s request and Taiwanese manufacturer did a really great job in both cases. I wouldn’t mind Asus doing the 3rd one as well, but a few weeks back rumors were pointing to HTC as the next Nexus (small) tablet manufacturer. If you ask us, that’s also a great thing. HTC is making great devices and, their hardware construction is usually top notch and those BoomSound speakers would fit just nicely on a Nexus device… if they make it there of course, hopefully they won’t be left out due to price limitations.

Rumors kind of stopped a few weeks ago and we didn’t hear anything about this since, until now that is. It seems like Nexus 8/9/Flounder/Volantis (it’s been called a bunch of names, we’ll stick to Nexus 8) has seemingly stopped by the Korean version of FCC (Federal Communications Commission) for testing. FYI, In Korea, FCC is called RRA (Radio Research Agency). The document (screenshot above) has been submitted by the HTC Corporation and you’re probably wondering what gives it away as a Nexus 8? Well, the word “Flounder” and a model number that is on this document, “OP8210000”. We’ve seen both of those back in June when @evleaks posted an image (located below the article)  of what looked like the back of a device containing the very same name and model number as this filing does. Note that back in May, we’ve seen a device codenamed “Flounder” show up in Chromium issue tracker as well. Not only that but @evleaks shared yet another set of alleged specifications with us back in July, which said that the device might sport 5GB of RAM.

Unfortunately we don’t have any more information at this time, although it seems more and more likely HTC will be the manufacturer of the upcoming Nexus 8 tablet, or Flounder if you’d like. Anyone excited about this one? Do you believe this will pan out and we’ll get an HTC-made Nexus in the end? 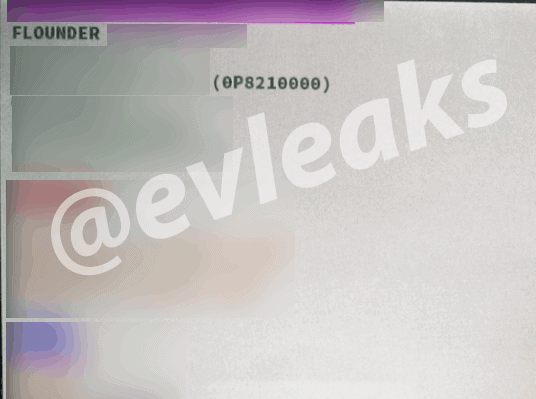