Japan is a very different place when compared to the US, I think that we can all agree on this one. Sony happens to be a huge Japanese company so it is very likely to see them carry that different culture with them to the West from time to time. Six days ago word got out that Sony and T-Mobile have finally started to release Android 4.4.4 KitKat to the Sony Xperia Z1s. It seems that Sony did not forget about the device like I thought they had. In fact, they even released some special apps that work when the phone detects that it has been placed in water. In true Japanese style, these apps and the ads that are used to promote them happen to be among the strangest things that I’ve seen today. Sony even went as far as to create their own section on the Google Play store to promote these apps, encouraging users to download the apps and submerge the phone in water and wait to see what happens.

The First app that I’d like to touch on is called Goldie. Now this is probably the ugliest, most bulge eyed sick looking Goldfish that I have ever had the displeasure of seeing. Sony has, however, made sure to point out to us that we don’t have to worry because he won’t die. The app works by the user placing the phone in water and then opening the app upon which the user is greeted by an ugly fish swimming around on the screen. Once the user picks the phone up and out of the water the fish begins to flail around and gasp for air until it is once again placed in water. The app happens to be surprisingly large for something so simple. The app comes in at 73.87MB and is free to download. I tried using the app on my Sony Z Ultra upon which I was greeted by this message: 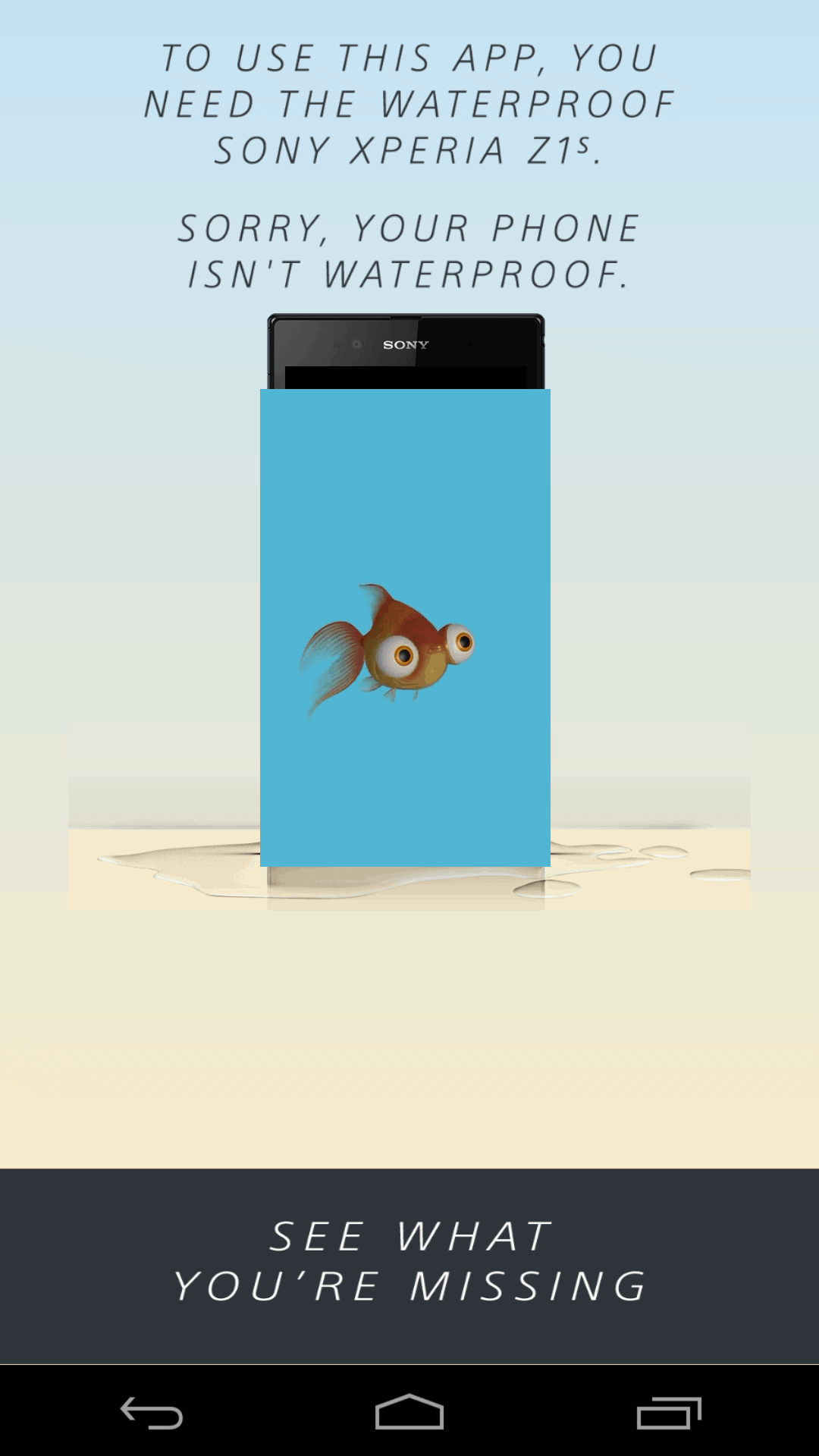 Well, this seems strange because my Sony Z Ultra is was marketed as water proof the last time I checked. This leads me to believe that either Sony has made these apps specifically to market the Xperia Z1s or they have some more updates to do to this app.

The next app that Sony has just released is called Sink sunk. This app works just like any other app that will be on this list in that it has to be first submerged in water. Once the user submerges the phone in water the submarine starts and the user pilots the sub by tilting the phone either to the right or to the left.

Photolab mimics the old school way of producing a photograph. By first selecting a photo that you’ve already taken, you then place the phone in the water and tilt the phone from side to side to “develop” the photo. The ad for this one isn’t so strange and looks quite normal.

Now, back to the strange and freaky. This app is called Plantanimal and judging by the title you should already have a picture of some strange looking plant like creature that is able to move on its own. Here is the description that has been given: Grow a mutant creature by watering it every day. Plant a seed that’s half plant, half animal. Dunk your phone to wake it up. When you get a push notification, water it again to watch it grow. Such a weirdo creature can only live on a one-of-a-kind phone. This last line here clearly states Sony’s objectives for creating these apps is to garner attention for its not so popular Z1s. I’m not sure if Sony will ever bring these apps to other Sony devices.

Tiny Umbrella seems to be the least impressive of all these apps and its size shows. Coming in at 4.4MB, opening the app reveals a polka dotted umbrella that can keep s small portion of your head dry as you try to avoid any sudden showers. All this will accomplish is allowing people to think that you are an idiot that is damaging his phone or allow you the opportunity to advertise Sony’s Xperia Z1s.

The last one is Rainy-Oke and though the app is normal as it allows you to sing along with only 10 songs, the ad certainly is the strangest of them all. Really, this one is just very weird compared to all the other strange ads in the Youtube video below.