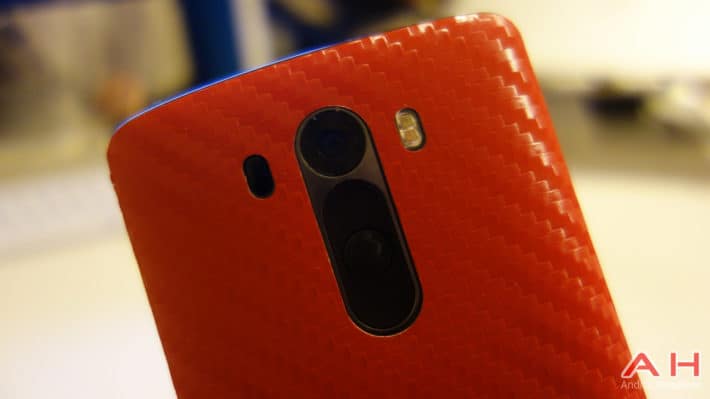 We've reviewed dbrand skins before, but it's been a few years (last time was on the Nexus 4 and Nexus 7 2012, so it's time). Their skins are really nice and available in all kinds of materiels and colors. Including Bamboo! dbrand gives you two back skins for the LG G3. One is a precision fit which covers the entire back and sides. Which is great if you don't remove the battery cover often. There is also one that only covers the back so that you can still remove the back cover to place the battery, or take out the microSD card, etc. You also get about 3 circles for the power button, 3 rings for the camera and 3 different front skins. The front is available to cover up the entire LG logo, or leave the circular LG logo or it can reveal the full logo. Now I've used the one that reveals the full branding, because it looks nice.

Installing the skin is just as easy as it is on any other device. In fact, dbrand has some really nice tutorial videos showing you exactly how to install the skin on your LG G3 and many other devices that they support. Now I didn't have a hair dryer, so I was unable to do it that way. But what I did instead was put the back on the LG G3, then put on the Incipio Feather case that I have here. Left it on for about 12-24 hours or so, and took it off and it worked great. I've had it on my LG G3 for about a week now and no issues with it peeling off or anything.

With dbrand, if you want to go red and black carbon fiber like I did, you're buying just one skin. Because you can mix and match very easily. The front is $3, the back is $10, and the accents is $2. Which I think are really good prices for these skins. Now we have some to giveaway as well. We'll be giving them away in the next few weeks on our Friday Giveaway so stay tuned! Oh and we also have a custom LG G3 with a dbrand skin that we are giving away as well. Details coming soon.