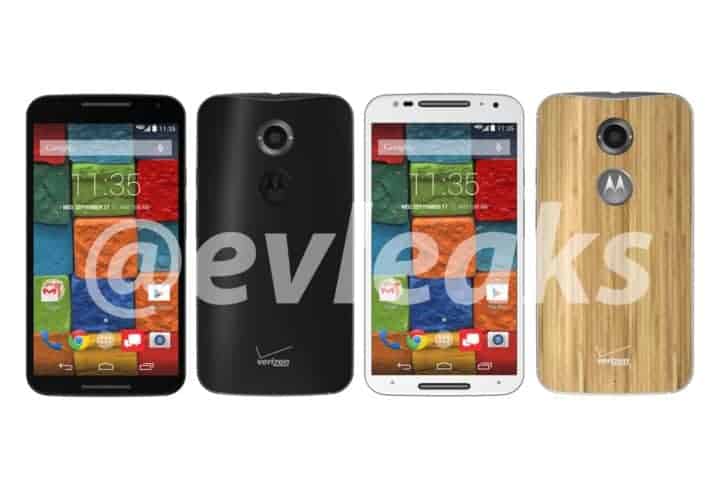 Motorola is believed to be unveiling some new devices on the fourth, and quite ironically, the number will be four devices as they have teased in an image just last week. One of those new devices is believed to be the new Moto X(or MotoX+1)alongside the new Moto G, and the Android Wear smartwatch from the company, the much anticipated Moto 360. There is also potentially going to be an unveiling of a new headset, but lets be honest that's hardly as exciting as the other three. When it comes to the new Moto X we have seen some previous leaks of the device(or so we have been led to believe was the device, they are leaks after all so how can we be sure)but none that had really show anything definitive. Motorola has been good about keeping their new device from leaking thus far, until today it would seem.

Thanks to evleaks we have a press render image of the new Moto X for Verizon, which as expected doesn't look that much different from the original Moto X from 2013, but you can tell some differences are there. From the press shot, things definitely look a bit wider than the last Moto X, and the camera on the back seems to be bigger as well. It would also appear that the new Moto X has dual front facing speakers, which should make plenty of people happy, a feature that has been fairly popular since HTC's flagship One device from last year, but also found on the low cost Moto E.

As expected Motorola looks to be providing Moto Maker options for the new device as well, and pictured here we can see the all black model, and a white model device that comes with a wood grain back. We all know how you love the wood. There are some elements to the image that remain unexplained. There seems to be multiple new sensors on the front which you can see on the bottom of the white model's front face, and the logo on the back almost looks like a button that may serve some functional purpose. The 3.5mm audio port is on top just like before, and since this is Verizon it wouldn't be complete without the logo stamp which can be seen clearly on the back of the device. Unfortunately we don't have any specs, but the screen does look like a bigger size than last year's Moto X, so could it actually be 5.2-inches? We must say, this is one heck of a retirement gift from some who has been a consistent leaker over the last couple of years, thank you kindly Evan.